Today, as the Feast of the Immaculate Conception, is the day for Spanish Blue.

No, its not cheese - a blue veined Manchego perhaps - still less pornography - a dubious product of the back streets of Barcelona - but is, of course, a liturgical colour, conceded to the Church in Spain and in her former colonies by Pope Pius IX in recognition of the support given by the Spanish for the doctrine of the Immaculate Conception. On the basis that they were once base in the Spanish Netherlands the use of the colour has been adopted by some EBC houses such as Downside. It is also used by some Marian shrines - remember (well, lets try not to) the hideous vestments Archbishop Marini had for the Pope on his visit to Mariazell - though one theory is that they were the cause of the Archbishop's retirement.

The chosen shade of blue appears to derive from the riband of the Order of Charles III, which is under the patronage of the Immaculate Conception, and depicts that on its badge and star.

The Spanish Privilege is not to be confused with Sarum blue. That was a very different colour, and from its iuse in Advent probably originated as substitute for violet, which was always an expensive colour. If I remember aright from the appropriate volume on liturgical colours in the Henry Bradshaw Society medieval dioceses followed the use of their cathedral - thus Wells wore blue and Exeter violet.

Sarum blue is a darker shade, as in this extant fifteenth century example: 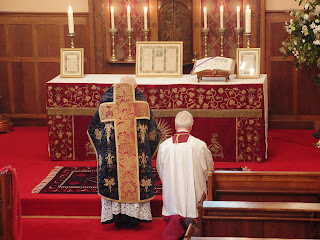 There is a link here to a piece from the Australian St Bede Studio about the variety in the shades and use of blue, violet and red in ecclesiastical dress.

Reviving Sarum Blue was a point of honour with some Anglo-Catholics of a past generation, and it has, I believe, remained popular with some of their successors in the US. Here in England the most prominent church to use it is Westminster Abbey - there it is used as a mourning colour - remember the funeral of Diana Princess of Wales. Maybe the Ordinariate can restore its use to the wider Church.

As for the Spanish variety perhaps the English Marian shrines should petition for the right to use it.