The last Abbot of Colchester

December 1st 1539 saw the third martyrdom of an English Benedictine abbot that autumn, with that of the Abbot of Colchester following those of his brothers of Reading and Glastonbury.

Bl John Beche, was also apparently known as Thomas Marshall - I have not seen an explanation of this point.

His date of birth is unknown. He was educated at Oxford (probably at the Benedictine Gloucester Hall, now Worcester College) and he took his degree of Doctor of Divinity in 1515, and within the next fifteen years ruled the Abbey of St. Werburgh, Chester (now Chester Cathedral), his name appearing as twenty-sixth on the roll of abbots of that foundation.

He was elected Abbot of St. John's, Colchester, 10 June, 1530, and, with sixteen of his monks, took the Oath of Supremacy on 7 July, 1534. The year 1535 brought the martyrdoms of the three Carthusian priors and their companions (4 May), of St John Fisher (22 June), and of St. Thomas More (6 July), all for the Papal right to universal supremacy in spirituals. Beche was so deeply affected by these examples that his unguarded expressions of reverence and veneration for the martyrs, reported by spies, drew down upon him the resentment of the King. In November, 1538, the Abbot of St. John's further exasperated Henry and his ministers by denying the legal right of a royal commission to confiscate his abbey. Within a year of this he was committed to the Tower of London on a charge of treason, was discharged from custody, and rearrested some time before the 1st of November, 1539.

Witnesses were found to testify how the abbot had said that God would "take vengeance for the putting down of these houses of religion", that Fisher and More "died like good men and it was pity of their deaths", and that the reason for the King's revolt from Catholic unity was his desire to marry Anne Boleyn. In his own examination the abbot yielded to human weakness and tried to explain away his former assertions of Catholic truth. Despite this he eventually received martyrdom. Tried at Colchester, by a special commission, in November, 1539, he no longer pleaded against the charge of contumacy to the newly established order of things. He was convicted and executed.

An anonymous contemporary partisan of Henry, quoted by Dom Bede Camm in "English Martyrs", I, 400, says of Abbot Beche and others who died at that time for the same offences, "It is not to be as these trusty traitors have so valiantly jeopardized a joint for the Bishop of Rome's sake. . .his Holiness will look upon their pains as upon Thomas Becket's, seeing it is for like matter".

The abbey church of Colchester before the dissolution.
From BL Cottonian MS Nero D VIII

The fifteenth century gateway and some stretches of precint wall are all that survive - the gateway gives some idea of what has been lost. 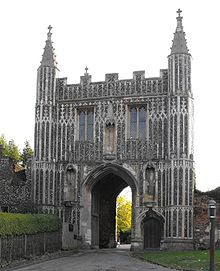 Photo from Wikipedia
Posted by Once I Was A Clever Boy at 15:21

Are you aware that on December the 1st 2011 we held a Mass for Abbot Beche in the Gatehouse room the first Catholic service on the site since 1539. We have have had two more Catholic services there and we will be saying prayers on Sunday the 24th in honour of St John the Baptist. We will have another two services later this year. We would be happy to update you on developments if you wish.
regards
Jennie Guthrie-Stevens Friends of of St James the Less Colchester