The Battle of Wakefield 1460


Today is the 550th anniversary* of the battle of Wakefield.

This modern painting of the battle is by the excellent historical battle scene artist Graham Turner: 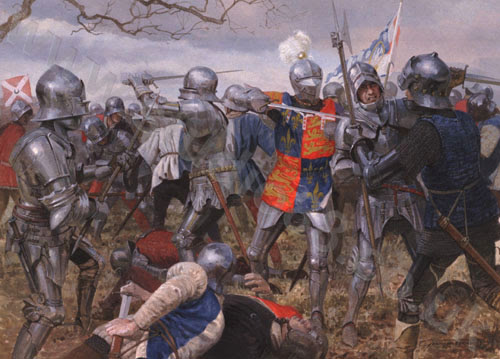 There is a tolerable account of the battle on Wikipedia here - my caution comes from its frequent citation of A.L.Rowse's dreadful book on the Wars of the Roses. Whatever else Rowse got from his relationship with the great K.B. Macfarlane it was not an understanding of the fifteenth century.

There is another online article about the battle here, and a longer, illustrated, essay by Keith Dockray and my good friend Richard Knowles is available here.


There is an exhibition at Wakefield Museum about the battle until the end of January.

My interest in the battle is not just that it occurred in my home area, but I was actually born on the battlefield, in Manygates Hospital, which is adjacent to the traditional site of the death of the Duke of York in 1460. I would not attribute my interest in the fifteenth century solely to that fact - there are so many associations in that part of Yorkshire with the castles of Pontefract and Sandal and the battlefield at Towton as well as that of Wakefield, but it does give one a sense of linkeage - one that comes through to my work on Bishop Fleming, whose church at Crofton still overlooks the battle site.

According to John Leland iin the sixteenth centiry Edmund Earl of Rutland, the second son of the Duke of York, was killed beyond Wakefield bridge - and not as in Shakespeare' s play where the school boy Rutland is killed despite his tutor's pleas by the vengeful Lord Clifford who exclaims "Thy father slew my father and I will slay thee." Rutland fought as a combatant in the battle, and who killed him is unknown. However Leland adds the detail that Rutland would have taken refuge in a poor woman's house but that she shut the door in his face and he was slain forthwith. I sometimes wonder if the woman was an ancestress or prototype of that icon of Yorkshire feminity, Mrs Nora Batty...**

* Allowing that is for the 1752 calendar correction.

** For the uninitiated this is a humorous reference to the BBC comedy series Last of the Summer Wine.