Our Lady of Guadalupe and St Juan Diego Cuatitiatoatzin

This year as it falls on Sunday we shall miss out on the feast of Our Lady of Guadalupe, but today is that of St Juan Diego Cuatitiatoatzin, who received the vision of Our Lady and whose tilma bears her image. 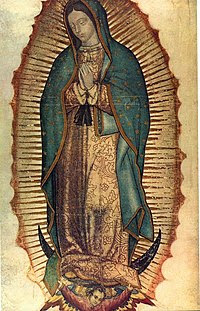 Our Lady of Guadalupe

The apparition at Guadalupe has been interpreted in a variety of ways. One has emphasised its providential nature, as with others in later centuries related to times of crisis in the Church. at the time of the spread of heresy in the reformation era. Indeed in contast to the view that Guadalupe represents a Catholic or Counter Reformation sensibility it is interesting to realise from an English standpoint that in December 1531 King Henry VIII had not yet broken with Rome - so Our Lady of Guadalupe is in a real sense in communion with pre-reformation England.

More immportant perhaps is the fact that Our Lady's appearing to St Juan Diego can be seen as a positive recognition of his and his countrymen's conversion and their full membership of the Catholic Church, thus anticipating the debate about the status of the native populations of the Spanish Empire in succeeding decades.

The Conquistadors brought Christianity to the Americas, the true "Liberation theology" that delivered the inhabitants from slavery to appalling religious systems. Next time a dewy-eyed PC pinko-liberal witters on in your presence, as they are wont to do, about the "evils" visited upon the New World by the Spanish Conquest just remind them of the nature and realities of Aztec worship...
As a friend once expressed it with his customary eloquence "The best thing any dago ever did was stamping out native South American religion."
Posted by Once I Was A Clever Boy at 16:23