November 17th is the anniversary of the deaths on the same day in 1558 of Queen Mary I and of her cousin and Archbishop of Canterbury, Cardinal Reginald Pole.
In recent years both Queen and Cardinal, as well as her husband King Philip, have the subjects of new biographies which seek to present them in a much more favourable and nuanced light, and taking ccount of new research and understandings of sixteenth century life and realities. This process is continuing, and although it may take some time before everyone is speaking of "Good Queen Mary" her reign, and the considerable progress made during it in restoring Catholicism is being reappraised and understood more impartially. There have been a series of recent biographies and other studies of the Queen which have presented a much more balanced account than has been usual, and we await my friend John Edwards' biography of her in the Yale English Monarchs series. Henry Kamen's King Philip is a very readable account of the life of her husband, who emerges as a far more human and attractive figure than he is often presented in popular perception.
There is a continuing series of articles about the Queen at the website Mary Tudor- Renaissance Queen There is a catalogue of portraits of the Queen here.
This stained glass depiction of Queen Mary and her husband King Philip is little known in this country but which is contemporary. 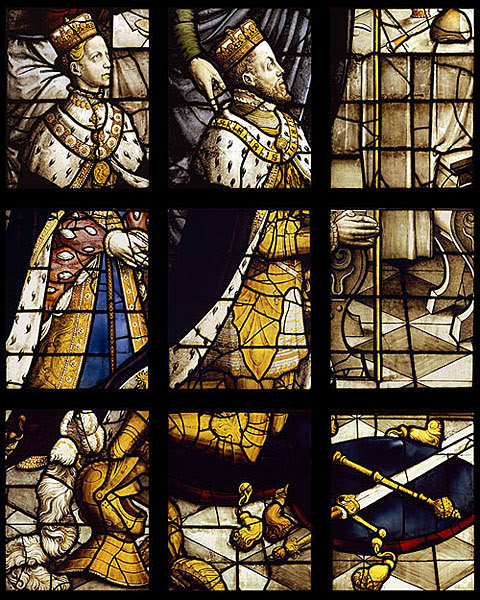 From a window in Sint Janskerke Gouda, The Netherlands, made in 1557 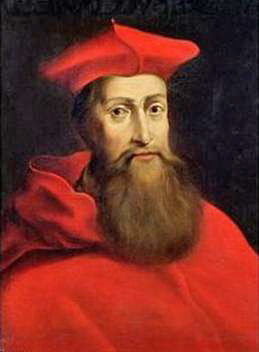 Cardinal Reginald Pole
Image: Wikipedia
For many years Pole was awaiting an academic biographer; this gap has been filled to a considerable extent with the publication of Thomas F. Mayer's Reginald Pole: Prince and Prophet (Cambridge Studies in Early Modern British History), although it is not always the easiest book to read.

The Queen and Pole's considerable efforts to re-establish Catholicism in England have most recently been studied in Eamonn Duffy's Fires of Faith.

Two years ago, on the 450th anniversary of the Cardinal's death, and long before I started blogging I served as thurifer at a Requiem Mass in the Extraordinary Form for Cardinal Pole in the chapel of his college, Magdalen here in Oxford. These photographs, taken by Br Lawrence Lew, O.P., appeared, together with the link to his Flickr set of the Mass, on the NLM site. 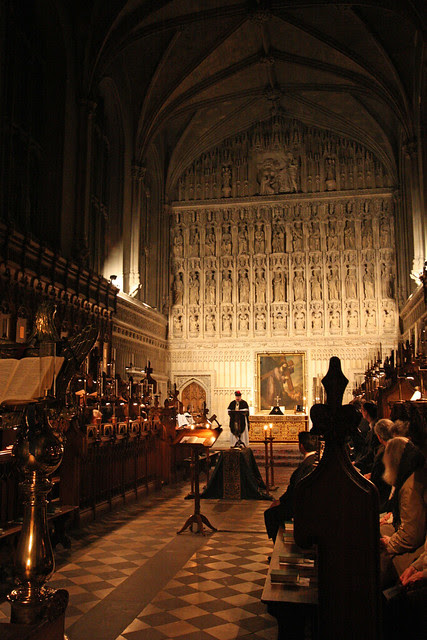 The Mass, organized by the Latin Mass Society, was celebrated in the chapel of Magdalen College, with the permission of the President and Dean. Cardinal Pole had been an undergraduate in this college, and it was a privilege for us to assist in the Mass celebrated in the Extraordinary Form in this beautiful (essentially) medieval chapel. The Mass included absolutions at the catafalque, which bore the Cardinal's arms
The celebrant was Fr John Osman, parish priest of Dorchester-on-Thames, and the Mass was expertly and prayerfully sung by the Schola of Bl. Thomas Abel, Oxford University's Gregorian chant society, which was founded by the current Chairman of the LMS, Dr Joseph Shaw. 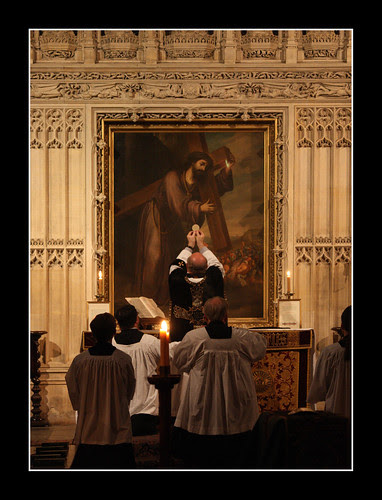 More photos in my Flickr set.
Posted by Once I Was A Clever Boy at 17:10