Pilgrimage to the Birmingham Oratory

Today we had a day pilgrimage from the Oxford Oratory to visit the new shrine of Bl.John Henry Newman at the Birmingham Oratory. 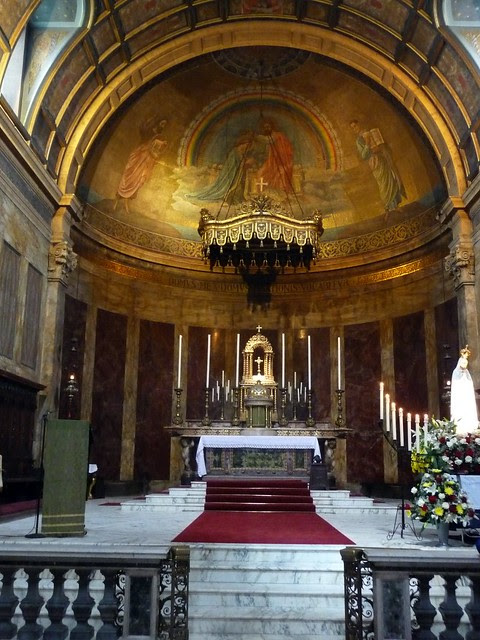 The High Altar with the Benediction Throne in place

Photo by John Berghout on Flickr
We arrived in time for the end of Exposition and were able to attend Benediction before the 11 am Mass and then proceeded to the Shrine Chapel ( the St Philip chapel to the right of the main church, and all that remains of the church Bl. John Henry built and knew) for the devotions. I understand that many prayer requests are coming in to the Oratory in the wake of the beatification and today there was an impressive and moving set of requests forhis intercession.

After that we were given a tour by the Provost, Fr Richard Duffield, whom we had all known in Oxford. We started in the sacristy, met Pushkin the cat - I gather he is now the best known resident since he met the Pope - and went upstairs to see the Library. Here, as Fr Duffield pointed out with Newman's collections of Patristic texts lining the shelves, was the beginning of the whole process of Newman's conversion. The books were largely acquired by Dr Pusey from the scattered contents of the libraries of monasteries dissolved during the French revolution. As Fr Richard said here was an example of how as one thing is destroyed the life of the Church is revivified elsewhere.

In the Library is the desk at which Bl.John Henry wrote the Apologia Pro Vita Sua in the spring of 1864, on resting on it Newman's copy of Kingsley's article which prompted his famous reply,and the manuscriptof the Apologia itself.
We were then given the great privilege of visiting Newman's room - visits have to be limited to ensure the protection of such a survival - before visiting the church. In its present form this is a work of 1909, and built as the Cardinal Newman Memorial Church. We saw the St Philip Chapel - inspired by that in the Chiesa Nuova in Rome, complete with a reproduction of St Philip's body under the altar, and the shrine of the 'other' St Valentine (February 21st, not 14th). This relic was given to Newman by Pope Pius IX so that Newman could celebrate a High Mass on what was his own birthday. 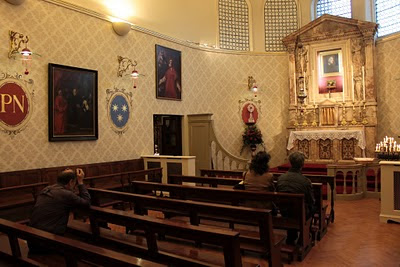 Photo by James Bradley
Fr Richard then took us back to the new shrine chapel and explained the renovation and conversion work that had been undertaken. The redecoration is of very high quality and greatly enhances the chapel, whilst preserving its character and features from the time of Newman, including a screen of columns decorated by his architect John Hungerford Pollen, who designed the church at St Stephen's Green in Dublin, and inspired by the Palatine Chapel in Palermo. The recent work included preserving the link to St Philip whilst making it Newman's shrine, the creation of lamps modelled on the design of Cardinal's hats, and how Fr Richard had found scrunched up in a box Pope Leo XIII's Bull creating Newman a Cardinal - now restored and framed by the side of the altar - and a display case with the coffin brasses, a mitre and, when it comes back from the current exhibition in the city centre, the Cardinal's pastoral staff.

We concluded with a visit to the excellent shop that has been created off the cloisters. This has a fine selection of books, statues, rosaries and Newman memorabilia, and is open every Saturday and Sunday. Refreshments are also available. In additionthere is an exhibition about the life of Bl. John Henry, also in the rooms of what was once the Oratory school surrounding the cloister.

All in all a most enjoyable and interesting pilgrimage - it was not just sight seeing - and one I would recommend highly to anyone considering going.
Posted by Once I Was A Clever Boy at 20:15