Last week there were reports in the Daily Telegraph, on Fox News, which has photographs, and on Yahoo of the discovery in the National Portrait Gallery archives of a cigar box containing drawings done in 1871 when the tomb of King Richard II was opened at Westminster abbey. It was this examination of the King's remains which established that he had not died as a result of a blow to the skull as in Shakespeare's play.My home town is Pontefract and it was in the castle there that the dethroned Richard was imprisoned and died in early 1400 - assuming that he did not escape and another body sent to London - and after initial burial at King's Langley was buried alongside his first wife, Anne of Bohemia, in the tomb he had commissioned for himself at Westminster by King Henry V. 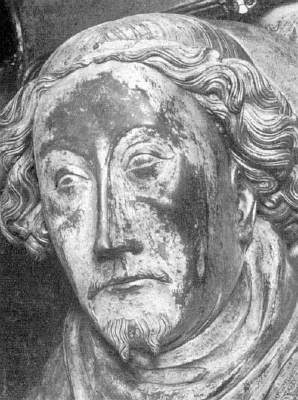 It is just possibly this event perhaps more than anything else - but it is a case of perhaps - of the story of the downfall of King Richard and his death at Pontefract that first fired my enthusiasm for the later middle ages - but who would not have with any sense of the past and living in a town with castle and history like Pontefract. Alas little of the castle survives today - the demolition of 1649 reduced it essentially to foundations. Here is a picture of what we lost, and indeed not that much different from the castle Richard would have seen in his last months or weeks, although in his time the buildings were doubtless in better repair than they appear to have been in the early Stuart period. By that period the supposed site of his violent death was being shown to visitors.

Pontefract Castle in the 1630s
A painting probably commissioned by King Charles I, now in Pontefract Museum
Photo Wakefield MDC and Pontefract Heritage Group
Whilst researching this post I found a website Richard II's treasure, which I have also .added to the blogroll. This looks at the court culture which the King created around himself in the 1390s, and is a valuable addition to Ricardian studies.