Today is the feast of the Frankish St Eligius or Eloy.

Wikipedia has a detailed account at Saint Eligius - but do look at note 1 about the identification of the subject matter of the first painting illustrated.

A few years ago on the Medieval Religion discussion group Ellie Pridgeon, Jane Wickendon and Genevra Kornbluth all contributed to the academic conversation about this once popular saint.

Work attributed to him and a selection of later images depicting his story can be seen on this French language website:
http://www.nieuletalentoursenlimousin.fr/le-musee/ses-hommes-et-ses-femmes/les-limousins-40/

According to the Vita, a hagiographical life of the saint written shortly after his death by his friend and contemporary St Ouen, Archbishop of Rouen, Eligius was given just enough gold by Clothar to make a sella regis, or King’s throne (sometimes misinterpreted as saddles) but with amazing skill and ingenuity, Eloi produced two. In the late Middle Ages this feat saw him adopted as the patron saint of goldsmiths (Forsyth 1946, 143-4). The story is depicted in an initial in the Carmelite Missal of c. 1393, a manuscript associated with the London Whitefriars. It shows the bishop presenting a golden saddle to the King (British Library Add. Mss. 29704-05, fol. 164r).

There is a medieval carving of St Eloi as blacksmith in SS Peter and Paul, Wincanton, relocated into the Victorian porch.

There is/was also a lost wall painting at Highworth (Wiltshire). A tracing exists in the collection of the Wiltshire Archaeological and Natural History Society in Devizes: 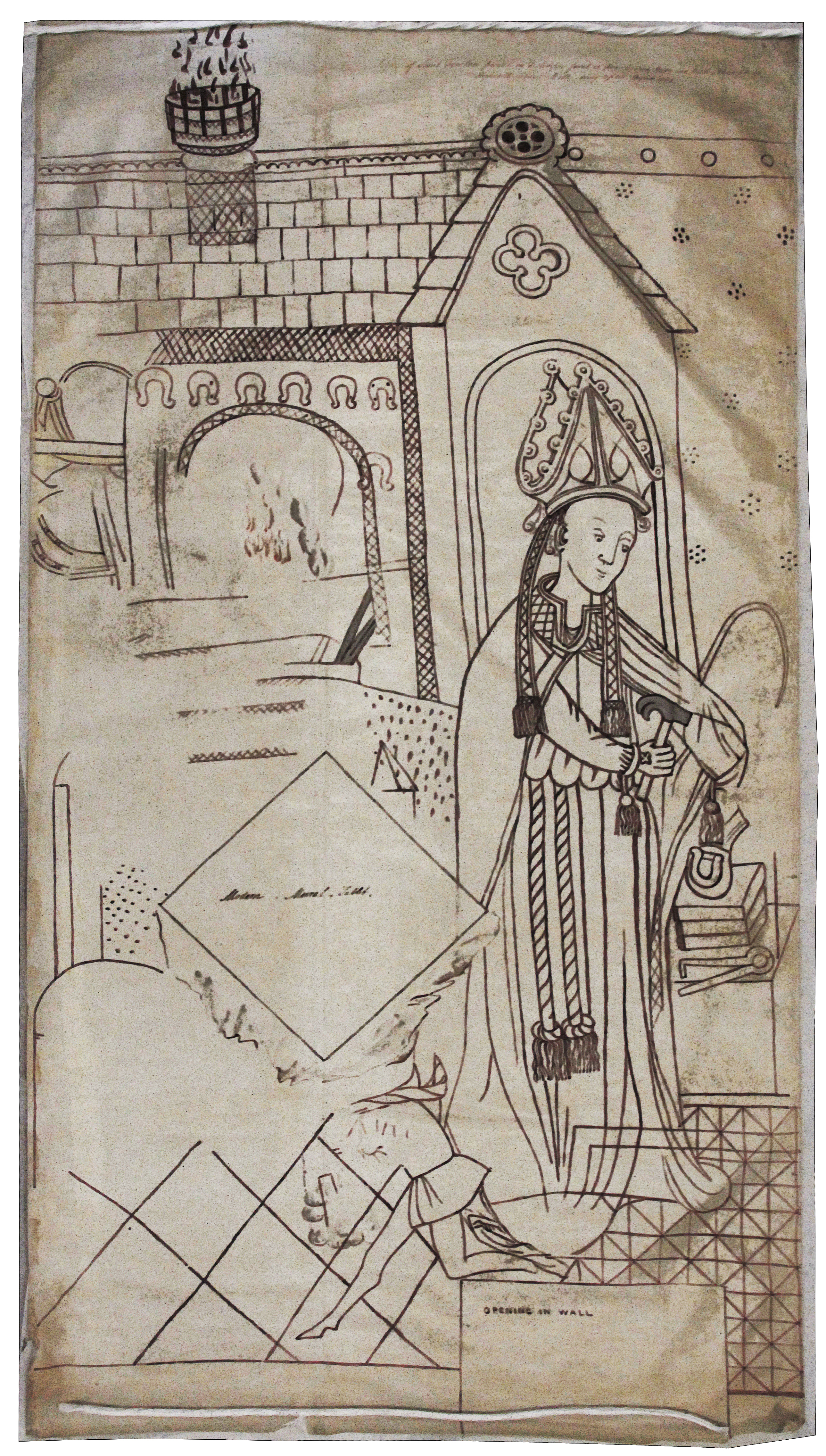 The Highworth painting and the cult of St Eligius is examined in: E. Pridgeon and R. Rosewell, ‘The Miracle of the Horseshoe: A Fifteenth Century Wall Painting at Highworth Church, Wiltshire’, Wiltshire Studies, Vol. 105, 2012.

My interest in devotion to him comes in part from the fact that the medieval chapel at Wentbridge, near my home town of Pontefract was dedicated to him. This was a very appropriate choice for a community which had developed where four townships and three parishes met at the bridge over the little river Went. This was where it cut through the magnesian limestone esscarpment and which made its living by providing hospitality and services to travellers along what eventually became the Great North Road. It also appears from the work of Sir James Holt to be the setting for the earliest recorded and authentic medieval Robin Hood stories - for more on this look at Holt's excellent book Robin Hood.

As someone who used to collect coins I also recall that the first man to strike coins in England by amechanised system rather than by hand was the Frenchman Eloy Mestrel early in the reign of Queen Elizabeth I. The scheme was abandoned and the Frenchman ended up being hanged for counterfeiting at Norwich in 1572. His first name would suggest that he came from a family linked to minting money.