Face to face with King Robert I


By chance the other day I found this article about the latest work in facial reconstruction on the skull of King Robert I of Scots: 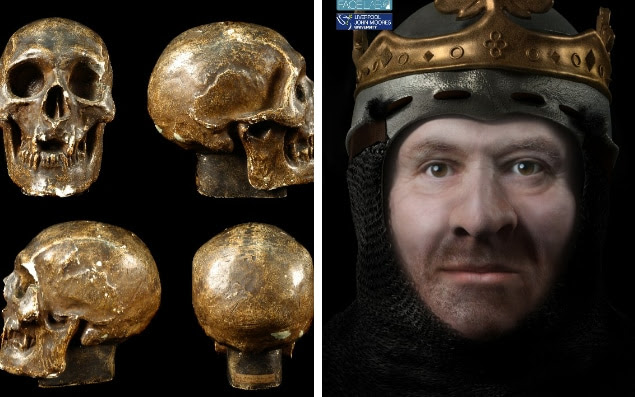 The King's scull and the reconstruction

The information site Royal Central has the following post about the research:


A new reconstruction of Robert the Bruce’s face shows that the medieval King of Scots suffered from leprosy.
The reconstruction, a joint project between the University of Glasgow and Liverpool John Moores University, determined that due to the disfigured jaw and nose, it was extremely likely that the legendary warrior-king suffered from the ailment.
Professor Caroline Wilkinson, the director of the Face Lab at Liverpool John Moores University, told The Daily Telegraph that two versions of Robert the Bruce’s face were constructed – one without leprosy and one with mild leprosy.
“We could accurately establish the muscle formation from the positions of the skull bones to determine the shape and structure of the face,” Wilkinson said.
Regarding whether the King suffered from leprosy, she said, “He may have had leprosy, but if he did it is likely that it did not manifest strongly on his face.”
Professor Wilkinson also reconstructed the face of Richard III after his remains were found under a car park in Leicester.
No visual depictions exist of Robert the Bruce, and no written accounts include a description of his appearance. Professor Wilkinson says the team relied on “statistical evaluation to determine that Robert the Bruce most likely had brown hair and light brown eyes.”
Robert the Bruce reigned from 25 March 1309 to 7 June 1329 and led Scotland in the First Scottish War of Independence. He is best known as a warrior-king, having launched campaigns in Scotland, England, and Ireland. He defeated Edward II’s armies in 1314.
The cause of Robert the Bruce’s death is uncertain, but the rumour has spread in the ensuing centuries that he suffered from leprosy. Records from his reign show that he suffered from a mystery illness several times, but it is never named.
Historians and experts at the Robert the Bruce Heritage Centre say it would have been impossible for him to attend to his regular duties if he’d suffered from leprosy. Today, leprosy – or Hansen’s Disease – is a rare and treatable infection that can be cured with a multidrug therapy treatment.
Robert the Bruce’s tomb was discovered on 17 February 1818, when workmen broke through the ground on the site of Dunfermline Abbey in Scotland and uncovered a vault. Inside, a decaying oak coffin was found, and once opened, researchers found the body encased in lead. It was later removed from the lead and inspected, and researchers discovered that the skeleton measured 5 feet 11 inches, and the sternum had been sawn to allow the heart to be removed and buried separately – a common practice at the time.
A plaster cast of the King’s skull was taken to the Royal College of Surgeon’s Hunterian Museum, and several reconstructions have taken place since then.
His coffin was reinterred on 5 November 1819, placed into a new lead coffin to preserve the remains.
Dr Martin MacGregor led the project. Dr MacGregor, a senior lecturer at the University of Glasgow, says he was inspired by the reconstruction of Richard III’s face and wanted to apply the methods to Robert the Bruce.
“The case of Richard III revealed how far the technology had advanced and I saw an opportunity to apply the technology to the Hunterian skull held here at Glasgow.”

Yesterday's Daily Telegraph had an illustrated article about the project which supplies additional historical and scientific information and which can be seen at  http://www.telegraph.co.uk/science/2016/12/08/face-robert-bruce-reconstructed-showing-scottish-king-had-leprosy/