The Tour de Beurre is not a new name for the old EU butter mountain but rather that, as I am sure all discerning readers (and all my readers are, obviously, discerning) will know, of the south-west tower of Rouen Cathedral.

There is a good introduction to the history of the cathedral and its architecture on the French Wikipedia website at Cathédrale Notre-Dame de Rouen. 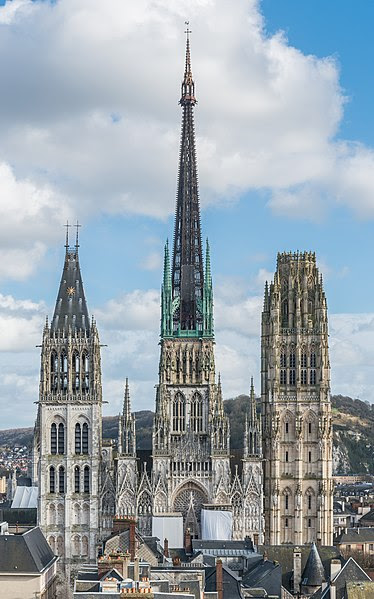 One explanation of the name of the tower is that, unlike the rest of the cathedral which is built of local white stone from Caumont, it is built of a more yellow stone from Saint-Maximin in the valley of the Oise. This it is suggested led to the idea that it looked as if it was constructed of butter. The other explanation (and the two need not be exclusive) is that the tower was funded by the money given for licences, costing 6 deniers Tournois, to eat butter during Lent by the inhabitants of Rouen

Until I started researching this post I had assumed tht the Tour de Beurre was a rebuilding of an earlier structure, but I now understand that until the late fifteenth century the west front of the cathedral had only the northern Tour St Romain, built circa 1145.

Considerable building works going on in and around the cathedral in the late fifteenth century. Guillaume Pontifs, who became Master of Works of the cathedral in 1462 completed the Tour Saint-Romain by the addition of its uppermost stage and pitched roof in 1468-78. This became the principal bell tower, with nine bells, in addition to those already there in 1467,the Marie d’Estouteville and in 1470 the Guillaume. As a result this became known as the tour aux onze cloches.

Between 1477 and 1484 work was carried out on the cathedral library, but then attention turned again to the west front, and was lop-sided in appearance and so the canons, in the archiepiscopate of Robert de Croismare commissioned Guillaume Pontifs in 1485 to build the southern tower.

This was carried on after 1496 by Jacques Le Roux, who completed the tower in 1506save for the finish of the top - the Canons debated as to whether to have a spire or a lantern. The parish church of Saint-Étienne la Grande Eglise was established at the base of the tower in February 1497.

The design skillfully follows and complements the same set of stages and fenestration and other principal features in the much older Tour Saint-Romain whilst being very much awork of its own time. It culminates in the octagonal lantern - the Master of Works appears to have wanted to complete the tower with a stone spire but tha canons, who appear to have been divided over the issue, and worried by the cost, settled instead on the idea of the pierced parapet.

The statuary on the tower is important, notably that on the east face, which was inspired by the legend of the Ara Coeli.

The West Front of Rouen Cathedral

The completion of the tower led to fissures appearing in the central rose window of 1370 by Jean Périer, and as a result the central portal was reconstructed by Roulland Le Roux between 1508 and 1511, the decoration of the doorway and its tympanum being the work of Pierre des Aubeaux.

With acknowledgements to Wikipedia and rouen-histoire.com

The nearby abbey of St Ouen has a central tower of similar date with a very similar profile. Both are discussed in detail with splendid illustrations in the article at Le beurre et la couronne

There are a fine set of expandable photographs of the cathedral here.

The result both with the tower and the renovated and enhanced west front is one of the most impressive pieces in the Flamboyant style. This is often contrasted to English Perpendicular, but that I think is to over- simplify. Both styles have a strong vertical emphasis, both combine that overall scheme with the use of sculpture and buy the time off the work at Rouen English builders at, for example, King Henry VII's chapel at Westminster were experimenting with canted angles and fluid plans. The French retained much more of the curvilinear tradition in window tracery, but the overall similarities are strong - as indeed thay are with Castilian work such a sthe tower of Salamanca and the extensions to and completion of Burgos cathedral.

One is tempted to wonder if Boston stump in Lincolnshire, itself being completed at the same time as the Tout de Beurre is in any way linked to it, or if two architects came up with similar spectacular but unrelated designs.

The upper part of the west front of Rouen Cathedral


At Bourges Cathedral the north tower of the west front is also known as the Tour de Beurre. It collapsed in 1506, and was rebuilt in the period 1508-42. Tradition has it that this too was funded in part by the revenue from licences to eat butter in Lent. 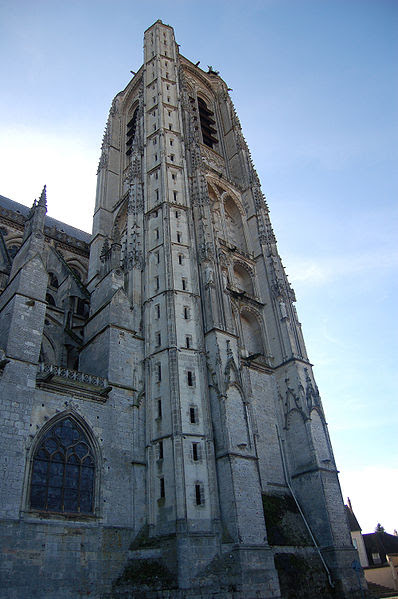 The north tower of Bourges Cathedral


All of which goes to show that either giving something up in Lent or substituting something for the fast can bring considerable benefits in the here and now, let alone any spiritual gains.