Out and about Oxford with Friars

This morning I gave a tour for the community of the Oxford Franciscan Conventuals of the sites of the four medieval friaries in the city.We arranged to meet in Radcliife Square and thus I set off leading my group of Franciscans in their monastic habits around the city.


It has to be said that not much remains, indeed very little above ground of any of the four houses, but excavations, surviving records and texts and the eye of faith help. The buildings of the friaries had largely gone in all four cases by 1578 when Ralph Agas drew his aerial map of Oxford.

All four were situated just outside the city walls, and, as in other cities, strategically placed to minister to a particular quarter of the urban community. Certainly here in Oxford they all had extensive open space around them, and one of the Friars pointed out to me that the radical Franciscan Peter John Olivi (d.1298) defended the Franciscans right to have gardens for recreation in the debate on poverty within the Order.

I understood also that one of the present community had seen a manuscript of receipts from one of the medieval friaries in Oxford which suggested they made an income from baking altar breads and from tanning.

We started with the Austin friary - now represented by the site of Wadham, including the King's Arms, and parts at least of the sites of Rhodes House and Harris-Manchester. At the south-east corner there a late medieval doorway can be seen from Mansfield Road which is probably part of the perimeter wall of the friary complex. The friary hosted regular academic disputations, known as "doing the Austins", after one of which Wyclif was informed of his censure by a Church council.


The Carmelite house started on the site of what is now Worcester College. King Edward II fleeing from the defeat of Bannockburn is said to have vowed a new site for the Oxford Carmelites if he escaped, and fulfilled it by giving the royal residence of Beaumont Palace, birthplace of King Richard I and King John, to them in 1317. Apart from the lane called Friars Entry - presumably on the site of the gatehouse - all that can be seen above ground is some pieces of window tracery in a garden behind Beaumont Street (developed at the beginning of the nineteenth century and crossing the site). It is not clear if this does come from the friary or has been rescued from another site in the city. I understand foundations of two substantial walls have been found either side of Beaumont Street itself which may well be those of the church - or possibly an earlier great hall of the palace.

We then crossed the western side of the medieval walled urban area, and out by the site of Littlegate, to look at what remains of the Dominican gatehouse, now built into the Centre for the Deaf. East of it was the church - its plan recovered in part by excavations in the early 1970s - and now covered by modern housing and part of the Magistrates court. This was the burial place from 1312-1315 of Piers Gaveston, and I gather what may have been his tomb was found in the cloister during the excavations. As Gaveston was excommunicate at the time of his death he would not have been interred in the church. His body was subsequently removed to King's Langley and the Dominican house there.


Just to the west and straddling the town wall was the Franciscan friary. Today a piece of grass protects the remains of the choir of the church - like the Dominican site the stone foundations were largely robbed away - and there is a plaque to commemorate Roger Bacon (1214?-1292?), as well as the nearby street Roger Bacon Lane. He lived on in folk memeory as the bridge gate on the old Folly Bridge, demolished in 1779, became known, erroneously, as Friar bacon's study. The excavations of the early 1970s revealed the plan of the church - like the Dominican church it had a typical friary plan of unaisled choir and aisled nave, but here there was also an elongated north transept to house more altars along its east wall. This looks to be a unique feature, suggesting both the numbers of the friars and popular demand for Masses.

At the moment building work is going on opposite the site of the church as part of the rebuilding of the back of the Westgate centre - one might hope this process will yield more about the history of the site.

The grassy area of the choir once held the shrine of Bl. Agnellus of Pisa, who led the first Franciscans to England and who died in 1236.

Also in the church was the heart of Richard of Cornwall, King of the Romans and brother of King Henry III, who died in 1270, and the  body of his third wife and Queen Beatrix of Falkenburg. King Richard himself was buried at Hailes, his  Cistercian foundation in the Cotswolds that housed the relic of the Holy Blood. 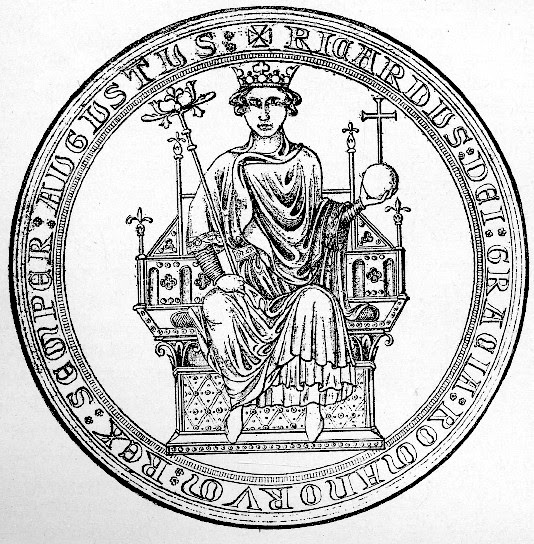 The Great Seal of King Richard of the Romans

In the 1380s the community included Peter of Candia, born in Crete and one of the Greek-speaking Franciscans who were sometimes resident in medieval Oxford; he was elected as Pope Alexander V in the Pisan obedience in 1409, but died the following year.

I also drew attention to the important library of the Oxford Greyfriars. They possessed the manuscripts, and also the sanctuary slippers, of Bishop Robert Grosseteste of Lincoln (d.1253), who had been a friend and patron of the Order.

Sadly the library which had been an important centre for study appears to have been in decay on the eve of the dissolution when John Leland visited it.

This was a most enjoyable morning, and it was a pleasure to show the present Conventual Franciscans where their predecessors had lived, as well as to relax with them over coffee afterwards and share ideas about the life of medieval friars.