Today is the feast of St Chad, who died in 672, and who is seen as the Apostle of Mercia, founder of the ancient see of Lichfield and patron of the Catholic archdiocese of Birmingham. His surviving relics are now housed above the High Altar in St Chad's Cathedral. The cathedral website has a piece about them and their survival at The Relics of St Chad. 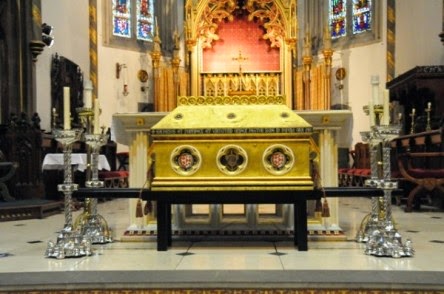 The reliquary containing the bones of St Chad in front of the altar at the
Metropolitan Cathedral and Basilica of St Chad, Birmingham,
on the Solemnity of St Chad, March 2nd.
Image:clasmerdin.blogspot.com

Many churches, both medieval and modern are under his patronage in the counties of the west midlands and Lancashire, the southern half of which was in the Lichfield diocese until 1541. I have posted about some of them previously in my post Churches of St Chad.

This year the church of St Chad at Uppermill in the moorland township of Saddleworth, historically in Yorkshire until the mangling of boundaries  in 1974, but looking more towards Lancashire in terms of its local economy, is celebrating its 800th anniversary, originating as a chapel established by Whalley Abbey. The parish website is at St Chad's (Uppermill) — Saddleworth Churches.

Saddleworth was the one piece of Yorkshire not in the medieval diocese of York, but in that of Lichfield and its successor dioceses of Chester and Manchester. 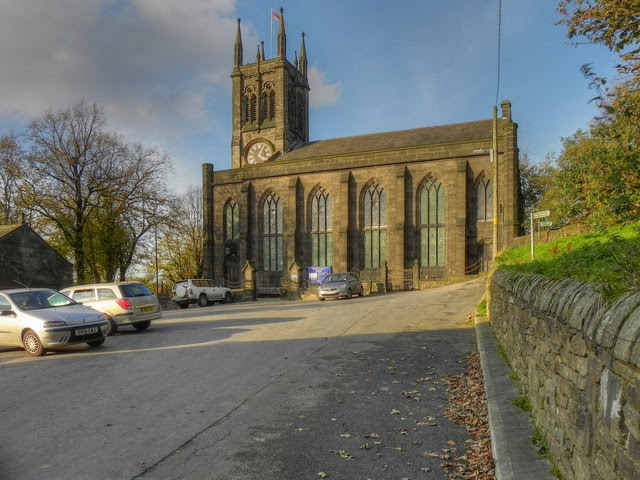 
The church as it is today is a rebuilding of 1831-33, and typical of the style known as a "Waterloo Church." The smaller previous building, which looks to have been largely seventeenth and eighteenth century in date, the tower being rebuilt in 1746, can be seen below:

Painted circa 1826 by John Holland before the old church of St Chad was rebuilt from 1831 to 1833. This depicts the annual rushbearing ceremony, which has  recently been revived when rushcarts processed from the various villages and assembled outside the church.


There is more about the history and revival of the of the Saddleworth Rushcart here, and about the Rushcarts in general here.

It was at St Chad's that many of my ancestors must have worshipped before my branch of the family (and there are many branches of the Whiteheads in Saddleworth) became Wesleyan in the late eighteenth century, and eventually moved away to Manchester. The man who was the apparent founder of our family in Saddleworth, Henry Whitehead, sometime bailiff of the lands of Roche Abbey there, was recorded in the 1546 Chantry survey as one of the Churchwardens of St Chad's. I wonder how much his experience of parish life in those years mirrored that of The Voices of Morebath?