Earlier this year a friend gave me a copy of Queen Victoria's Youngest Son: The Untold Story of Prince Leopold by Charlotte Zeepvat (Thistle). I read the book in the summer and would certainly recommend it to anyone interested in the Queen and her family. 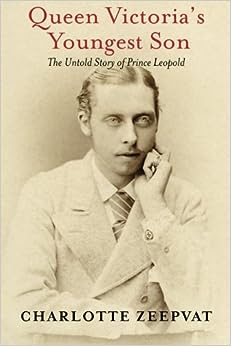 The Prince, created Duke of Albany, died early in 1884, 130 years ago, in his thirty first year. He had suffered from haemophilia, which was probably the cause, if not the immediate occasion, of his sudden death whilst on holiday in Cannes. The immediate cause may have been a reaction to his medication - a point which, rather oddly, is relegated to a footnote.

He left two children - Princess Alice, Countess of Athlone, and the last surviving granddaughter of Queen Victoria when she died in 1981, and  Prince Charles Edward, born after his father's death, and who reigned as the Duke of Saxe-Coburg and Gotha from 1900,and who died in 1954. He was grandfather to, inter alia, the present King of Sweden


Amongst its other excellent features - the author has worked through a great quantity of letters in the Royal Archives at Windsor - is a discussion of the significant evidence for haemophilia in the Saxe-Coburg family before the birth of either Queen Victoria or the Prince Consort.

As a biography it is very good on the frustrations Prince Leopold felt due to his illness and the overly possessive, if clearly well-intentioned, actions of his formidable mother.


It also brings out how in his public life as Duke of Albany ne was developing skills and popularity as an active member of the Royal family when it came to opening new ventures and patronage of good causes.

Whilst he studied in Oxford - something he fought to do and achieved, becoming a very popular figure in the University - he lived in a house on Banbury Road, which still stands - it is now the University Careers Office. Given the Prince's often frustrated hopes in that matter he might find that somewhat ironic.

The only slight disappointment in the book is that I feel it should have more on what happened afterwards to the Prince's family - the role of his widow until her death in 1920 for example - and of his friends.

There are an interesting set of illustrations in the book, which help to evoke the life and times of a figure who, if not forgotten, has not hitherto received the attention he deserves, both as a member of the Royal family and as a courageous and obviously likeable young man whose life was cut short by a condition beyond anyone's control at the time.