Born in 1249 as Jacques Duèze in Cahors he reigned as Pope from 1316 until 1334. A formidable and energetic Pope, the second to be based at Avignon, and where he further centralised Papal administration, published the collection of Decretals known as the Extravagantes,  and also played an active part in the political machinations of the age, clashed with the Holy Roman Emperor Louis IV, strenuously opposed the more extreme brands of Franciscan thought on Apostolic poverty, and raised a storm around himself in his last months with his views on the Beatific Vision. Today he is familier to the wider reading public through Maurice Druon's The Royal Succession and Umberto Eco's The Name of the Rose.

There is a modern online life of him at Pope John XXII and the old Catholic Encyclopaedia biography, which is fuller and more academic in its detail can be read in the New Advent online version at Pope John XXII

There is a short article about the circumstances of the Conclave that elected him in 1316 here,
and the account in Druon's novel of those events is extremely entertaining. 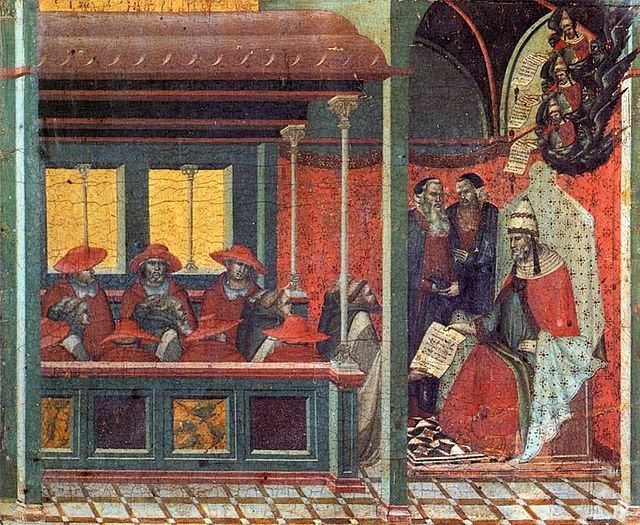 In many respects his pontificate marks the settlement of the papacy at Avignon and the concentration of its administrative machinery there, as opposes to the more peripatetic rule of his predecessor Pope Clement V, who had died in 1314.

The tomb of Pope John XXII in Avignon Cathedral

The tomb from the side

Image;marvellous-provence.com
The tomb was damages during the French Revolution - what in France wasn't one might add - and the effigy on it today has a head that is not the original. One book I have read, Herbert Norris's history of vestments suggests the original carved head survives in a museum on Avignon. This has the Pope wearing the tiara rather than a mitre, as on the effigy in the cathedral.