Out and about in Buckinghamshire

Last Saturday the Clever Boy had a day out visiting Buckinghamshire - not a county he knows well - when he went to visit friends who have recently moved with their baby son to live in the Chilterns.

I travelled to Aylesbury by bus, passing on the way the ruined structure of Dinton Castle, a folly built by Sir John Vanhatten in 1769 as an eyecatcher from his home, Dinton Hall.He used it to display his collection of geological specimens and subsequently it is said to have been used by a local Nonconformst congregation for their meetings. It stands on what was a Saxon cemetary and local legend has it that it is haunted by the ghost of John Mayne, who live locally and was the reputed executioner of King Charles I. 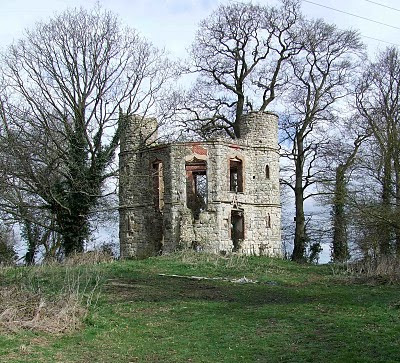 
In November 2012 it was bought for £56,000 by a local businessman who plans to restore it as a weekend retreat


Aylesbury struck me as being one of those old English towns like Doncaster and Chelmsford which with relatively modern expansion in the last 150 or so years plus recent redevelopment schemes have lost much of their former charm and offer little to catch the visitor's eye. However I met up with my host and we set off to his home, with a quick detour to look at Drayton Beauchamp church. 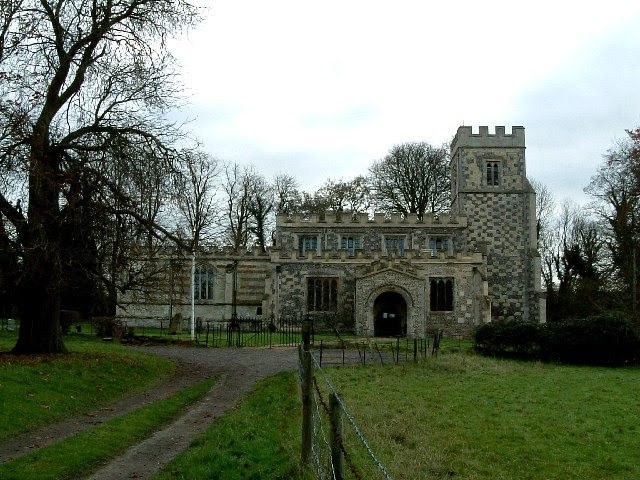 St Mary's is a fine late Perpendicular church, and apparently contains some good glass and a splendid eighteenth century tomb. There is a fine set of photographs of the church both inside and outside and of the furnishings on this Flickriver site which can be seen here. However it was locked, so we had to content ourselves with looking at the outside with its chequerboard masonry. The church's most famous incumbant was Richard Hooker, author of The Laws of Ecclesiastical Polity, who was appointed to the parish in 1584.


We travelled on through classic Chiltern valleys and hills, past a rather charming pumping station erected by the Rothschilds to serve their various houses in the area, to my friend's new home.

After catching up on our news and activities and eating lunch we walked up to the church of St Lawrence at Cholesbury. This small medieval church was rather heavily restored in 1872 by a Vicar who held the parish for 59 years - those were the days - and who early in his time as incumbant in 1832 had to face that fact that his poor parish was made bankrupt by the Poor Law. The few relatively wealthy parishioners could not afford the rates; partly as a result of his drawing attention to the case in 1834 the law was changed to set up parish unions for the Poor Law. 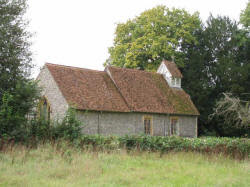 In the bell turret is a bell dated to 1620 with the inscription COM AND PRAY - which looks like an intersting bit of word play.

The church is situated just inside the banks and ditches of a late Iron age hillfort dating from 500 BC onwards, and thought to have been used mainly as a refuge in time of danger. The ditch around Cholesbury Camp


On the journey back to get my bus to Oxford my friend drove us to Hartwell. Hartwell House, of which there is an online account here, is now an exclusive hotel run by the National Trust, and not visible from the entrance - casual visitors are rather clearly not welcome. From 1808 until 1814 it was the home of King Louis XVIII of France, his family and his court in exile. It was at Hartwell that his Queen Marie-Josephine died in 1810, and where he accepted the invitation to return to France as monarch in April 1814. There is a more detailed history of the house and its occupants from the National Trust Hotels website here.


On the edge of the grounds of the House is the church of the Assumption of Our Lady - an interesting survival as a dedicatioon in itself. The medieval church was rebuilt in 1754-6 by the architect Henry Keene for Sir William Lee, the owner of Hartwell, in the Gothick style. I imagine the design was such as to make it an eye-catcher in the grounds of the estate. The octagonal plan is said to derive from the Chapter House of York Minster as, I suspect, do the two towers, one as the west end, the other over the chancel. The church had a black and white marble pavement and fan vaulting, but shortly after the second World war the lead was stolen from the roof and it fell into disrepair, and was declared redundant in 1973. It is a rather sad story of neglect - the shell may have survived but the interior largely gone and the building not accessible. This photograph shows what we could see from the path along the edge of the estate. 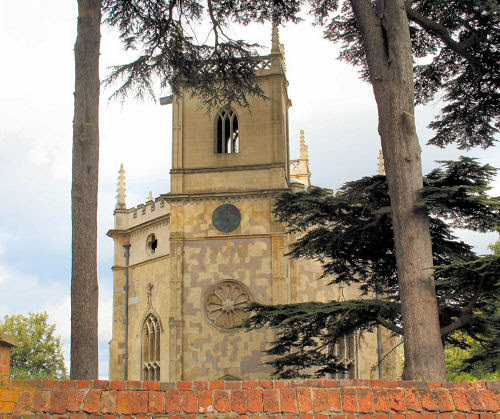 
There is a picture of what remains of the interior and more details on the Churches Conservation Trust website here. There are pictures of the House, the Church and the grounds on aset by Mick Baker on Flickr which can be seen here.

Just outside the perimeter of the estate is the Egyptian Spring, built in 1850 by the Egyptologist Joseph Bonomi the Younger. It is an alcove seat on the western side of Lower Hartwell opposite a small spring. Aa curious folly to find by the roadside: 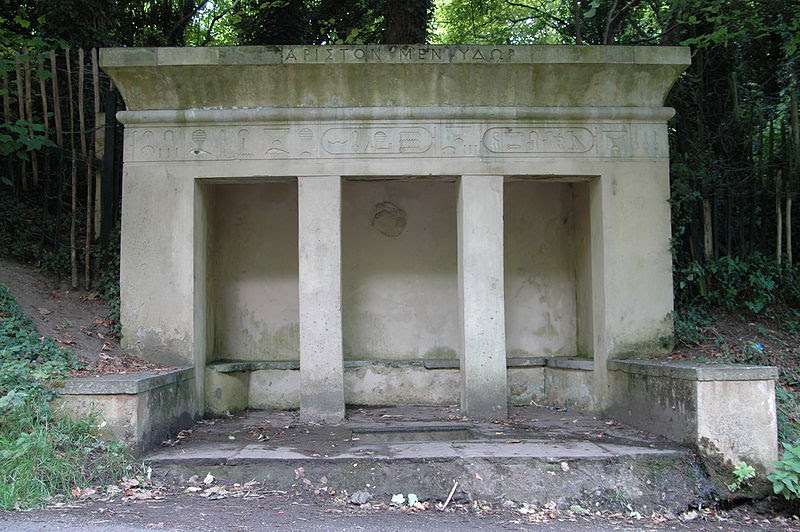 John Lee, the then owner of Hartwell, was a teetotaller


From Hartwell we went on to look at Nether Winchendon. Here there are some fine timber-framed buildings, suggesting the woodland economy of past centuries in the area. The church of St Nicholas has a typical Buckinghamshire style stubby tower with a stair turret, and the interior is full of box pews dating from about 1815, including that for the manor house which is painted and decorated with gothic carvings. The three-decker pulpit dates from 1613, there are some nice fragments of glass in the otherwise clear windows and several brasses, one on a miniature table tomb of a lord of the manor from the Bernard family who died in 1935. 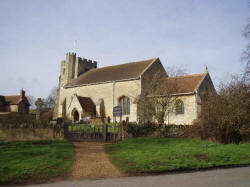 We passed the site of the medieval Augustinian Notley Abbey and passed through Long Crendon, over the county boundary and back into Oxfordshire at Thame. The great similarity of the church towers and apparently other features in both these places is, I think, worth noting. This clearly suggests the same master mason and evidence of local schools of design. I am rather inclined to think this is a topic which has not been sufficiently explored by historians of medieval church building. 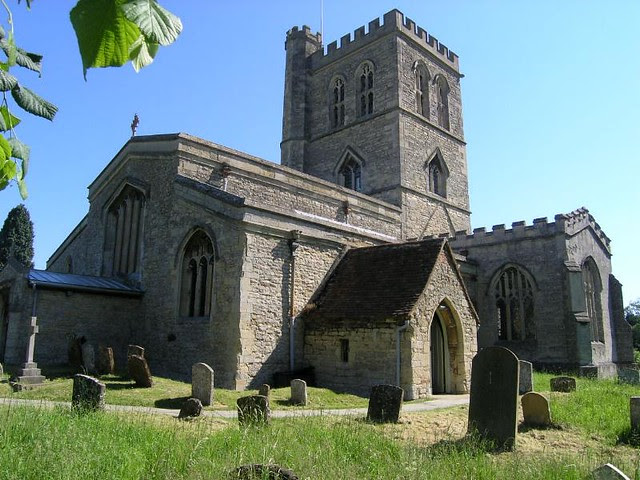 In Thame - an attractive market town which once formed part of the estates of the Bishops of Lincoln (so Bishop Fleming was with me again) - I bade farewell to my friend and got the bus back to Oxford. A thoroughly enjoyable day out with good friends and conversation, and also plenty of history and architecture to enjoy.

Enjoyed reading this while I'm researching castles in Bucks. Your photos are epic !
Thanks! The Castle Lady