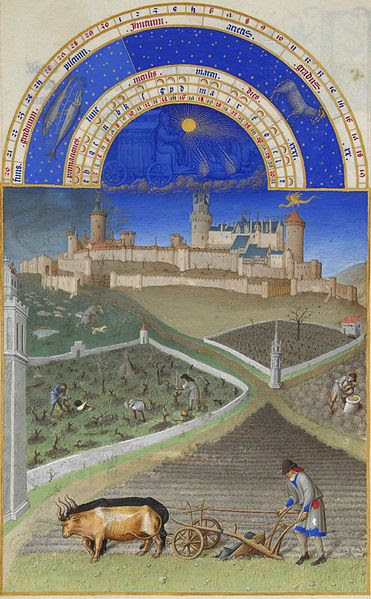 The landscape is the work of the courtly painter, the figures are by the Master of the Shadows

Lusignan at its height in the early fifteenth century, is illustrated in the Très Riches Heures of Jean, Duc de Berri, for whom it was a favorite residence until his death in 1416. It rises in the background of the miniature for the month of March, clearly shown in perspective, with its barbican tower at the left, the clock tower - with the exterior chute of the garderobe to its right - and the Tour Poitevine on the right, above which the gilded dragon flies, the protective spirit of Marc Lacombe.

To those points I would add that the depiction of this and, over the succeeding months, other châteaux associated with the Duc de Berri and his family, indicate a delight in their possession, and convey the fact that these medieval castles, however defensible, were essentially homes in the country, replete with medieval domestic comforts and surrounded with agriculture and other peaceful pursuits.These are residences, more than they are fortifications. The same sense is conveyed, for example, by surviving images of English castles in the sixteenth and early seventeenth centuries.

As with the other scenes in the manuscript the landscape is perhaps unnaturally tidy, altough the ploughman in the foreground is wearing patched clothing, and the grey and green tones do convey something of the climate and mood of March as the farming year demands hard work from the husbandmen.

The wayside shrine at the cross roads in the middle distance is an indication of the type of monument which may well have been common, but of which we have few surviving examples - although more modern examples are still to be found in Catholic areas of Europe.