Our Lady of Montserrat


At the back of the church at the Oxford Oratory is a box in which discarded books, magazines and objects of devotion can be recycled to other members of the congregation who might have use for them. Yesterday morning I found a slightly damaged and dusty but otherwise attractive painted plaster copy of the statue of Our Lady of Montserrat sitting in the box and thought I would offer it a home. I already have a small metal version of the statue which I found in the local fleamarket some years ago but thought this new one could also come home with me.

Our Lady of Montserrat

The original statue, one of the patrons of Catalonia, is one of the most famous Black Madonnas. It is preserved as acentre of devotion in the great Benedictine monastery at Montserrat near Barcelona. Legends claim that it was carved in the ealry years of the Church in Jerusalem, or that it was found in 718 and moved to Montserrat to safeguard it during the Moorish invasion of Spain. Contemporary scholarly opinion suggests it is late twelfth century, and indeed that originally it was not black - candle smoke and later layers of paint have given the figures a dark hue they did not have originally. Popularly it is known as La Moreneta - the little black one - by the Catalans.

There are online articles about the statue at Virgin of Montserrat which gives a general account, at Our Lady of Monserrat which gives more detail of the history and traditions, and from a site concerned with the tradition of black statues of the Virgin from the University of Dayton at Black Madonnas--Our Lady of Montserrat. A report from 2001 that it has been shown originally not to have been black can be seen at Montserrat Black Virgin 'was white originally' 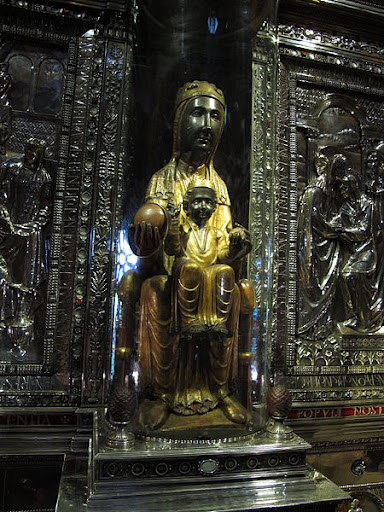 The original statue in its setting at Montserrat


May Our Lady of Montserrat continue to pray for the people of Catalonia, and also for me.