The Order of the Dragon and its curious legacy

Today is the 605th anniversary of the foundation by King Sigismund of Hungary and his Queen Barbara of Cilli of the Order of the Dragon, a chivalric order designed to unite the King's supporters both to his cause and to the defence of Christendom against the Ottoman advance in south-eastern Europe. 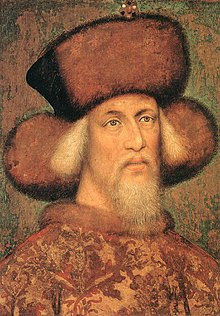 King Sigismund, about 1418
A portrait traditionally attributed to Pisanello

There is a good illustrated and referenced online account of the Order here, and there is a short article about it here. There are also online biographies of King Sigismund and Queen Barbara.

When King Sigismund, King of the Romans and Emperor-Elect as well as King of Hungary, came on a state visit to King Henry V in 1416 he was admitted as a Knight of the Garter, and in return made King Henry a Knight of the Dragon - as well as giving a major relic of St George to the chapel at Windsor. This exchange of diplomatic courtesies is still recalled in the Sword of State of the City of York, which is the one which hung over King Sigismund's stall in St George's chapel Windsor, and is ornamented with the emblem of the Order of the Dragon; I posted about this and its history, with illustrations, this time last year in Emperor Sigismund.

Emblem of the Order

Unlike the Garter, the Annunziata and the Golden Fleece, the Order of the dragon was not to have a continuous history, and seems to have declined in significance after the Emperor-King's death in 1437, and whilst surviving as Hungarian mark of distinction for the rest of the century until perhaps the disatrous battle of Mohacs in 1526, whenit became merely a memory. No attempt to revive it, as happened with some other monarchical Orders of Chivalry, such as the Order of the Elephant in denmark occurred until apparently, a refoundation at the time of the coronation of King Charle sIV in 1916.

There is, however, one curious legacy of the Order. One of the early recipients was Prince Vlad of Wallachia, whose adoption of the device led to his people referring to him in Romanaian as Dracul  (The Dragon), and yes, his son, also called Vlad, acquired the diminutive form of ... Dracula.

I found in the online article on the Order I mentioned above links to two articles about the Order and the origins of the Dracula story from the Journal of Dracula Studies - a publication to get one's teeth into - and they can be viewed and read by clicking of the highlighted numbers in the following references: