Today is the 150th anniversary of the Coronation of King William I and Queen Augusta of Prussia at Konigsberg in 1861. The King, who became German Emperor in 1871, was the last Prussian King to have a coronation - his son Frederick III was too ill and died after 99 days as Kaiser and King in 1888, although he envisaged two ceremonies, one as King and another as Deutsches Kaiser, and his son, William II, was dissuaded from holding the ceremony on the grounds of expense - Bismarck was not at all favourable to ceremonial, tending to see it as out of date. It is somewhat surprising, given William II's flamboyant style, that he did not insist on having a coronation.

This was the first coronation of which photographs survive, though I cannot find any online. I have seen one in a book by those eminent historians of photography Helmut and Alison Gernsheim, and there is a photograph of the Crown Princess on the day in Roger Fulford's Dearest Child. I remember seeing a series of paintings of the ceremonies reproduced some years ago in one of Sotheby's Art at Auction year reports.

I did find this picture, a painting by Adolf Menzel from 1861. The arrangement of the cathedral looks similar to that for the Norwegian coronation in 1906, with two facing thrones. The figures in red mantles are Knights of the Order of the Black Eagle: 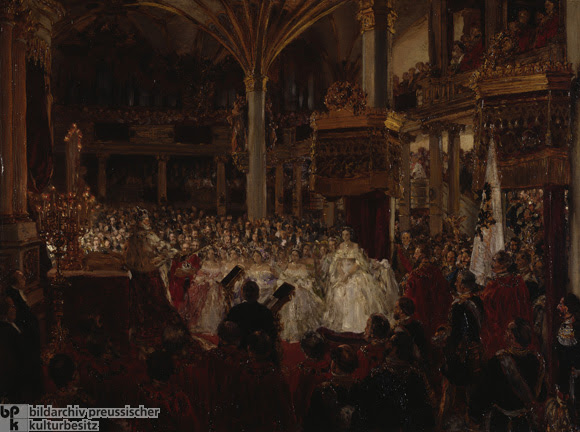