Today is the feast of St Paulinus, the founder of the see of York in 627, and the first bishop sent to evangelise or re-evengelise the northern Angles for the Roman mission.

The Oxford Dictionary of National Biography life can he read here and there is another life here.

No doubt because of the flight of Paulinus and Queen Ethelburga and her family after the death of King Edwin at the battle of Hatfield in 632, and his death in Rochester in 644 he never enjoyed the cult at York that developed for St Wilfrid (d.709) or later St William (d. 1153). Nevertheless he is depicted in the medieval glass in York Minster, as in this beautiful figure: 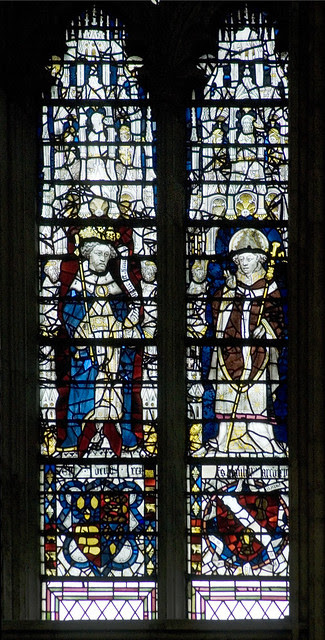 King Ælle of Deira and St Paulinus
The arms below the figures are those of King Henry IV and Thomas Walleworth
North Choir clerestory of York Minster, early fifteenth century

St Paulinus also occurs, togetehr with St Wilfrid flanking St Gregory the Great in the great east window of 1405-8, the work of John Thornton of Coventry, and paid for by Bishop Walter Skirlaw of Durham, whose arms are in the centre at the base of this panel.