The Holy Abbots of Cluny

Today is the Feast of the Holy Abbots of Cluny.
My own interest in Cluny arises in part from the fact that there was from 1090 until 1539 a Cluniac priory in my home town of Pontefract, and it was my interest in such local facts that began to expand my historical imagination. As the years have gone by I see that in not a few ways I am drawn to the Cluniac vision of worship and prayer alongside the world, and the pursuit of the beauty of holiness in all its forms. It is a topic upon which I have given a few lectures over the years, and one to which I hope to return.

This year is the 1100th anniversary of the foundation of the abbey in 910, and is being marked by a series of events in and around the remains of the abbey. The French mint has even produced a 10 Euro coin to commemorate the anniversary. The Pope has spoken in one of his weekly catecheses about the contribution of Cluny to the life of the whole Church - a point he has referred to in other addresses in recent years.

Cluny gave to the Church a model of a renewed Benedictine monastic life, that helped generate other, complementary, congregations, an ordered tradition of worship, the promotion of the arts in the service of religion, the encouragement of pilgrimage, the promotion of devotion to Our Lady, support for the emerging Papal monarchy and a centralised administrative structure. It attracted the patronage and support of contemporary rulers such as Alfonso VI of Castile and Henry I of England. In one sense it was arguably the first, and one of the most successful, of multi-nationals. Its legacy stretches far beyond the cloister.

A key factor in the development of Cluny was the independence from secular authority granted by its founder, Duke William of Aquitaine. By his foundation charter he placed it under the immediate authority of the Holy See. The text of that charter can be read here. The abbey grew in size and influence as a result, and so did the direct influence of the Papacy. This was a form of practical utramontanism, implemented with local outlets wherever Cluny acquired or founded dependencies.

To see an excellent account of the history of Cluny's first, and probably most important English foundation look at Lewes Priory, and Friends of Reading Abbey gives something about a foundation inspired by Cluny, although not regarded as part of the Cluniac Order as such.

I suspect that too many historians these days tend to concentrate, due to the nature of the surviving evidence, on Cluniac administration and economics at the expense of understanding what it was that drove forward the Cluniac system, and that was the religious impulse.

That also underlay the famous exchange of letters and pamphlets with St Bernard of Clairvaux about the expression of monastic life. Often seen as a clash between two entirely different models I think it should rather be seen as an internal debate within what was still, in many ways, a single, undifferentiated Benedictine tradition, and not untypical of clerical discussion or debate. What heightended it was the calibre of Bernard and Peter the Venerable, and the scale of their two monastic projects. Bernard may have had the more cutting comments, but it was Cluny that influenced the wider Church beyond the walls of monastic communities.

Pope Urban II wrote of Cluny that it

"shines as another sun over the earth, so that it is more fitting to apply to it the words of Our Lord 'You are the Light of the World' "

and St Hugh spoke of how

"Ever since we founded this monastery, prepared and helped by the divine clemency, we have very clearly experienced in this place the presence of the compassion of Almighty God and the gaze of His fatherly devotedness." 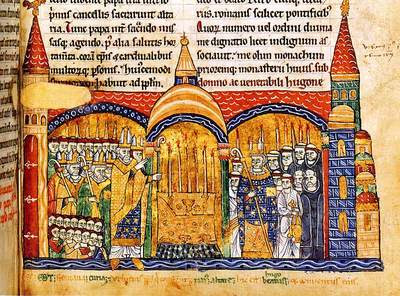 The dedication of the High Altar of Cluny III by Pope Urban II in 1095 in the presence of St Hugh and the community - from an early thirteenth century MS.
The Holy Abbots of Cluny are a group comprised of four saints - the great founding and establishing abbots - Odo, Maiolus, Odilo and Hugh, who successively ruled it from 910 until 1109, the centuries of growth and its zenith - and Bl Peter the Venerable who restored its fortunes after the disastrous career of Abbot Pons in the early twelfth century and whose abbacy marked the end of the era of Cluniac dominance. After Peter's time - 1122-56 - the abbey and its enormous family passed, relatively, into not so much decline, as being left behind by the newer developments in the life of the Church.

I have taken from Vultus Christi's post for this day last year the specific antiphon for the four sainted abbots for Lauds, the Little Hours and Vespers:

Odo arose full of the Holy Spirit,
and renewed the beauty of the monastic Order
throughout the world, alleluia.

Maiolus, overflowing with charity and with grace,
and emulating the holiness of the angels,
was lifted high above men in virtue, alleluia.

Odilo showed wondrously what was the charity of his heart,
who, while pitying sufferings of the faithful departed,
yearly decreased them by a sweet refreshment, alleluia.

When blessed Hugh was about to expire
on the day of the sacred rites of the great Sabbath [Holy Saturday],
he greeted the new light of the Paschal Candle,
earnestly praying with sighs that he might happily reach the promised land, alleluia.

Christ in Majesty from St Hugh's chapel at his retreat at Berze - an example of Cluniac painting, and of a central theme in Cluniac spirituality and art.
It was St Hugh, abbot from 1049 until 1109, who commenced and oversaw much of the rebuilding of the third abbey church, the building known to historians as Cluny III. Designed by one of the monks, Gunzo, and begun in 1088 it was the largest church in Christendom, and only exceeded in size in the sixteenth century with the building of St Peter's in Rome.

Pevsner wrote of Cluny in his An Outline of European Architecture
"Here was architecture so complex, so polyphonous, as earlier centuries in the West
could not have conceived, and the Greeks would have detested, but the ideal expression no doubt of that proud moment in medieval Christianity, when the Reform had conquered the throne of the popes, asserted the superiority of the papal tiara over the imperial crown, and called up the knights of Europe to defend the Holy Land in the first Crusade."

A model reconstruction of Cluny III

Amongst the enormities of destruction perpetrated by the French revolution few, if any, rival the destruction of the church at Cluny. Following the closure of the abbey in 1790 it was soon sold off to three speculators from Macon who proceeded to demolish it for its stone. The remaining buildings became a barracks, and it was only in the 1920s that Kenneth Conant began to study and excavate the remains. Today the south transept and foundations are virtually all that survives of one of the wonders of its, or any other, age.

For some pictures of the remains today look here.

Collects for the feast:

O God, refuge and surpassing reward
of those who walk blamelessly in Thy presence,
perfect in us, we beseech Thee, the love of holy religion,
that by the example and intercession of the blessed Abbots of Cluny
we may run with dilated hearts along the way of charity.
Through our Lord Jesus Christ, your Son,
who lives and reigns with Thee in the unity of the Holy Spirit,
God, forever and ever. Amen

O God, by whose grace thy servants the Holy Abbots of
Cluny, enkindled with the fire of thy love, became
burning and shining lights in thy Church: Grant that we
also may be aflame with the spirit of love and discipline,
and may ever walk before thee as children of light;
through Jesus Christ our Lord, who
with thee, in the unity of the Holy Spirit,
liveth and reigneth, one God, now and for ever. Amen
Posted by Once I Was A Clever Boy at 11:43

John Whitehead.
Dear John,
You have contributed this insightful article on “The Holy Abbots of Cluny”.
It is appreciated at the timely memorial.
May I thank you for reproducing the Link directly – for the ready access to this interest of you, “It is a topic upon which I have given a few lectures over the years, and one to which I hope to return”.
Our good wishes on Ascension Thursday.