Saturday May 29th is, of course, the 350th anniversary of the Restoration of the Monarchy when King Charles II entered London, in the twelfth year of his reign. I am indebted to the Australian Radical Royalist for some of this piece, and the images of the commemorative coin. The fact that it is being issued is an improvement on what happened fifty years ago, when so far as I recall it the anniversary passed unmarked. 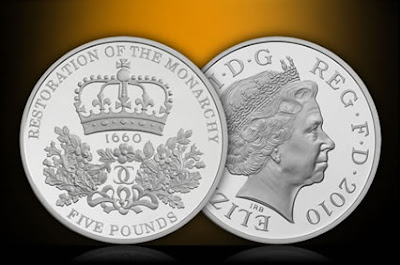 Following General Monck's march on London and the collapse of what remained of the regicide regime amidst popular calls for a free Parliament the Long Parliament having finally agreed to dissolve itself - it had gained the power not to be dissolved without its own consent ( does that sound at all familiar at the moment? ) the new, so-called Convention Parliament assembled on 25th April 1660, and soon afterwards received news of the Declaration of Breda in which Charles II indicated the moderate basis upon which the Restoration could be based. The English Parliament resolved to proclaim Charles King and invite him to return, which message reached Charles at Breda on 8th May 1660. The King landed at Dover and travelled to London which he entered in state on May 29th, his thirtieth birthday. 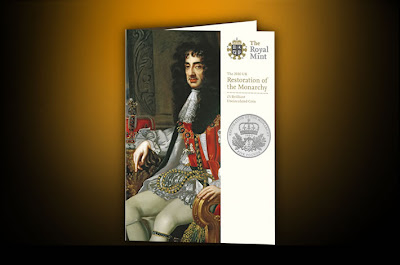 The Convention Parliament was dissolved in December 1660, and King Charles was crowned in Westminster Abbey on 23th April 1661.

I stress that fact that Charles II was in his twelfth year as King for two reasons. Firstly that is the legal point established in 1660 - he had been the lawful King of England since his father's death in 1649, and in Scotland he had been crowned in 1651.

The other reason is that in my home town of Pontefract the castle was held by a royalist garrison in January 1649 who were under siege from Parliamentarian forces. Upon hearing of the regiicide they proclaimed Charles II as King, and produced siege coins in his name, and with the inscription Post Mortem Patris Pro Filio which subsequently became the motto on the arms of the borough of Pontefract.