Dom Donald at Nunraw has copied my post on Cluny on his blog, and I will repay the compliment by circulating his post on Scottish Cluniac houses. 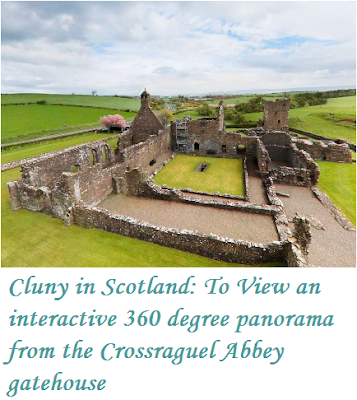 Celebrating Scotland ’s place in Europe ’s Cluniac heritage on the 1,100th anniversary of the founding of the Abbey of Cluny, Burgundy.

Paisley Abbey was founded in 1163 by Walter FitzAlan, an Anglo-Breton who brought monks to establish the community around the shrine to a local saint, St. Mirin. (St. Mirren – Scottish Football League).

Saturday 15th May: Concert with organ and choir The glorious interior of Paisley Abbey will be the backdrop for a concert with a strong French theme.

In 909 or 910, William the Pious, Duke of Aquitaine, founded a Benedictine abbey at Cluny in Burgundy . Two hundred and fifty years later the abbey was at the head of some 1,400 Cluniac establishments in France , Italy , Germany , Switzerland , Spain , Portugal , Belgium , England and Scotland .

For anyone interested in the history of Europe , the work of the Cluniacs cannot be overlooked. Their values remain relevant today: actions to promote peace, caring for the socially deprived and excluded, a sense of beauty. Varied architecture, a distinctive musical form, sculptures and paintings all form part of the fabulous heritage handed down to us by the monks.

La Fédération des Sites Clunisiens (Federation of Cluniac Sites) was founded in 1994 with a threefold objective: to forge close links between sites, enhance their Cluniac heritage and support their initiatives through action in the fields of education, culture and tourism. Several hundred people – elected representatives and private owners, cultural and tourism associations – are actively involved in the pursuit of these objectives. The Federation gives its backing to all their activities with the help of an international patronage committee bringing together researchers, archaeologists and historians. The Cluniac sites belonging to the Federation have now been organised into trans-regional and transnational itineraries.

As a result, a new European cultural and tourist network is growing, following in the footsteps of the monks of Cluny . Scotland ’s two sites, Paisley , founded in 1163 and Crossraguel in Ayrshire, founded c.1250, will be the focus of Scottish celebrations.

Today, Paisley Abbey is a living Christian community in the cherishing care of the Church of Scotland.

Crossraguel Abbey which was the last monastery to survive the Reformation of 1560 (the last monk died in 1601), is in the scrupulous care of Historic Scotland. 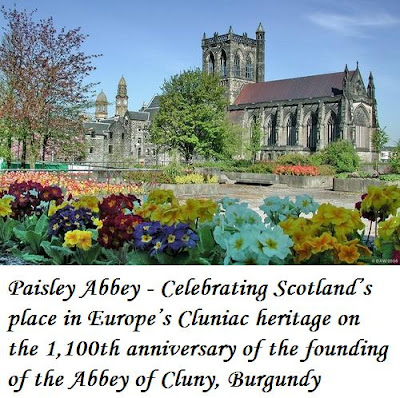 Abbot Berno, together with the Duke of Aquitaine, founded Cluny on