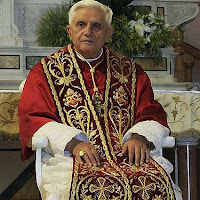 Today is the birthday of the Pope and an opportunity to express both in our prayers and in our good wishes for him the traditional ad multos annos.
As a personal rather than a pontifical anniversary it is a day on which to reflect on the extraordinary intellectual gifts he has manifested and on his enormous achievements both as a theologian and as a pastor.
Recent attempts to assail him are increasingly being seen to be as attempts by people with their own, particular, agendas mis-using and misrepresenting material. Amongst the excellent recent replies there is a good one here.
This topic had rightly drawn a great response from loyal Catholics, and part of our response should be to defend the Pope and the Church from unjust attacks.It is also important to see these attacks as the work of a few, with their own, very definite, and usually deeply reprehensible, aims, and of a wider group of the essentially lazy and easily led, who follow on unthinkingly. We need to keep a proper sense of proportion, and to answer critics of the Pope, of the Church, of Catholicism, and ultimately of Christianity both firmly and calmly.
Posted by Once I Was A Clever Boy at 11:30