Today is the feast day of St Anselm, Abbot of Bec 1078-1093, and then Archbishop of Canterbury until his death in 1109. His cult was established in England by Pope Alexander VI at the request of King Henry VII in 1497. His cult was extended to the Universal Church in 1690 following the "Glorious Revolution", and he was declared a Doctor of the Church at the request of the Stuart claimant King James III and VIII in 1720.

St Anselm wearing the pallium as Archbishop of Canterbury, and presumably flanked by monks of his cathedral. Illuminated initial from his "Monologion".
Manuscript by Hugo Pictor, Jumièges scriptorium, late 11th c.

I stayed at Bec in June 2004, on the eve of my realisation that I was being called into full communion with Rome. I am not sure how much the experience of staying in a thriving modern Benedictine community shaped that, but the whole visit to Normandy played a part in my pilgrimage of faith.

Bec is a beautiful place, although little survives from the age of Herlouin, Lanfranc and Amselm. The St Nicholas tower, a detached bell tower, in the photograph below dates from a late medieval restoration, and the building behind is the early sixteenth century Abbot's house. The foundations in the foreground are all that remain of the medieval church, and itself later than Anselm's time. That church blown up after the French Revolution by the military who occupied the abbey until the mid-twentieth century. The buildings I was staying in were from the age of Louis XIV and Louis XV. 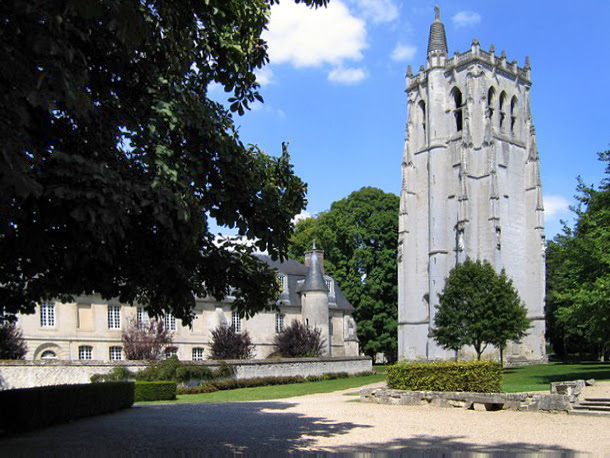 Recently I have been reading Warren Hollister's life of Henry I - more on that in a day or two - but what struck me was that Anselm, with two periods of exile as a consequence of his clashes with William II and then with Henry I over investiture issues,was, for his Italian origins and Norman formation, very English in his ecclesiology.

Having been present when the Pope denounced lay investiture in 1099 he resolutely supported the papal line, but his main objectives were less advancing the rise of papal monarchical power than of maintaining and extending the claims of the see of Canterbury to primatial authority over the whole of Britain. Within that model, and whilst respecting papal claims he sought a close co-operation of Church and Crown as in the late Anglo-Saxon system, and did this by a courteous dialogue with King Henry.

This raised an interesting idea - still only partially formulated in my head, but worth raising I think - that here we have a leader of the English church, pro-papal, but also very insular. St Anselm has often been held up as a role model for Archbishops of Canterbury. I do not want to steal Fr Hunwicke's thunder as to the Anglican patrimony, but could Anselm be seen as a spiritual patron for arrangements under Anglicanorum Coetibus I wonder?
Posted by Once I Was A Clever Boy at 17:34