Archbishop Bernard at the Oxford Oratory

The Sung Mass at 11 on Sunday morning at the Oxford Oratory was celebrated by the new Archbishop of Birmingham. 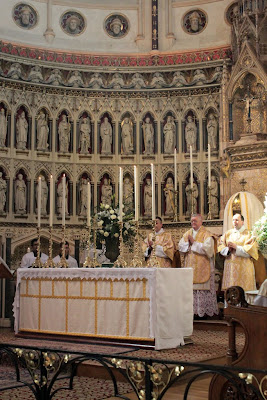 This was his first formal visit since his appointment and it proved a splendid and joyful occasion. The formal dignity of the liturgy, with its extra Archiepiscopal ceremonial, provided the splendour appropriate to Mass in Eastertide. To this was added both the joyful mood of the season and that of welcoming our Father in God to the church. Archbishop Bernard both celebrated and preached, and had the opportunity to meet many of the congregation after Mass and in the parish centre. He warmly commended the work of the Oratory, and of its parent foundation in Birmingham as of great benefit to the life of the diocese. He spoke of the need for new vocations and also of the forth coming papal visit and the beatification of John Henry Newman in September as opportunities for renewal and evangelisation by Catholics.

He also spoke in encouragement of the appeal on behalf of the restoration and expansion of the Oratory. The warmth of the parochial welcome was reciprocated by his pastoral warmth towards us as a community.

There are more pictures of the morning by James Bradley on the New Liturgical Movement site.
Posted by Once I Was A Clever Boy at 13:25