Today is normally given as the feast of St Catherine of Sweden, the daughter of St Bridget.

Catherine of Sweden (also Catherine of Vadstena; d. 1381) was the daughter of Ulf Gudmarsson, lord of Ulvåsa and of his wife Birgitta Birgersdotter of Finsta (better known today as St. Bridget of Sweden).  At the age of thirteen she was married to a young nobleman; their union was never consummated (later it was said that both had taken a vow of chastity).  When after a few years he died Catherine was in Rome with her mother, whose work she supported and whose ascetic lifestyle she imitated.  Catherine remained with Birgitta until the latter's death in 1373.  In 1374 she brought Birgitta's body to the latter's foundation at Vadstena, where Birgitta was interred and Catherine became abbess.  She spent the remainder of her life there and at Rome, working for her mother's canonization and directing the nascent Order of the Most Holy Saviour (the Bridgettines).  Her own cult was confirmed Papally in 1484.  Today is her dies natalis and her day of commemoration in the Roman Martyrology.  One of her attributes is a stag that is said to have protected her virginity by scaring off an intended attacker who had been lying in wait for her in a vineyard as she walked to Rome's basilica di San Sebastiano fuori le Mura.

Some period-pertinent images of St. Catherine of Sweden:

a) as portrayed in an oakwood statue in a later fifteenth-century altarpiece (c. 1476-1500) from Blidsberg, a locality of Ulricehamns kommun (Västra Götalands län), now in Västergötlands museum, Skara: b) as portrayed (at left; at right, St. Erasmus of Formiae) in a wooden statue in a later fifteenth-century altarpiece (c. 1476-1500) in Önums kyrka, Önum, a locality of Vara kommun (Västra Götalands län): 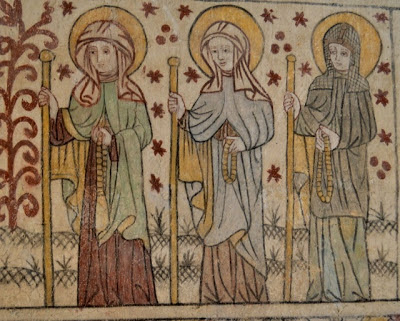 http://tinyurl.com/hsm68sx
The painting in situ:

d) as depicted (at right; at left, St. Birgitta of Sweden) in a painted panel of an altarpiece of c.1500 in Högsby kyrka, Högsby (Kalmar län):
http://medeltidbild.historiska.se/medeltidbild/visa/foto.asp?imageId=9518015 e) as depicted in a vault painting of c.1500 in Tolfta kyrka in Tolfta, a locality of Tierps kommun (Uppsala län): f) as portrayed in a wooden statue of c.1500 in Nordingrå kyrka in Nordingrå, a locality of Kramfors kommun (Västernorrlands län): g) as depicted (at left, flanking the BVM; at right, St. Birgitta of Sweden) in a painted panel of an earlier fifteenth-century altarpiece in St. Nykolai kyrka, Arboga (Västmanlands län): h) as portrayed (at left in the centre compartment; at right, St. Lawrence of Rome) by Håkan Gulleson in an earlier fifteenth-century altarpiece statue in Trönö gamla kyrka in Trönö, a locality of Söderhamns kommun (Gävleborgs län): 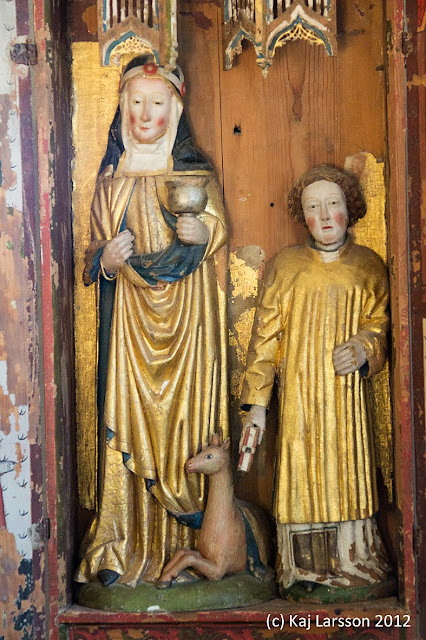 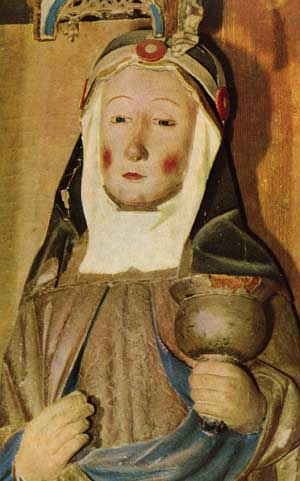 The history of the feast days of St. Katherine of Vadstena is rather complicated. It is thought that she was originally celebrated on March 24 in Vadstena Abbey. An office exists, but there are to my knowledge no extant medieval manuscripts which give positive evidence of this feast day. On August 8, 1482, a papal bull allowed the cult in Denmark, Sweden, and Norway, and held out the prospect of canonization. Six years later, a new bull authorized a solemn translation of her relics. This was celebrated in a magnificent manner in Vadstena on August 1, 1489, one of the greatest religious manifestations in late medieval Sweden. After that, her Translatio was the main yearly feast day, but celebrated not on August 1, but on August 2. In 1513, Leo X had the feast moved to June 25. These two feast days may be found in late medieval calendars from Sweden.

Unfortunately, the canonization of St. Katherine, which from the bulls and from a printed Summarium by Johannes Franciscus de Pavinis in the early 1480s would seem to be impending, has since been totally forgotten by the Papacy.