Today being Holy Saturday when the Church commemorates Our Lord sleeping in the tomb or indeed Harrowing Hell in anticipation of Easter it is worth recalling the medieval pra ctice of entombing the Blessed Sacrament in an Easter Sepulchre - there is an online introduction to this distinctive English medieval practice at Easter Sepulchre, and which gives a gazeteer of surviving examples. 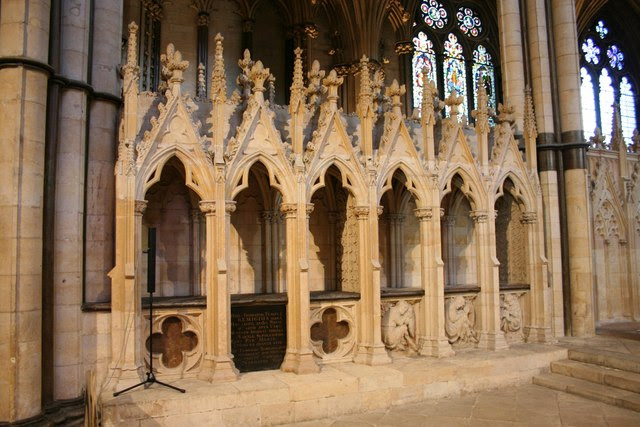 Lincoln cathedral - the tomb of Bishop Remigius and the Easter Sepulchre


If these stone examples point to particular wealth and prosperity other churches had wooden Easter sepulchres, which were, of course, less likely to survive the ravages of the reformation and time. Here is one surviving example, which is thought to be fourteenth century: Last year John Shinners posted on the Medieval Religion discussion group this text from the church of St Mary Redcliffe in Bristol in the later fifteenth century:

“Memorandum. That Master Cannings hath delivered, the 4th day of July, in the year of our Lord 1470, to Master Nicholas Pelles, Vicar of Redclift, Moses Conterin, Philip Berthelmew, and John Brown, Procurators of Redclift beforesaid, a new Sepulchre, well guilt with fine gold, and a civer thereto; an image of God Almighty rising out of the same Sepulchre, with all the ordinance that longeth thereto; that is to say, a lath made of timber Heven made of timber and stained cloths. Item, Hell made of timber and iron work thereto, with Devils the number of thirteen. Item, four knights armed, keeping the Sepulchre with their weapons in their hands; that is to say, two spears, two axes with two paves [shields]. Item, four pair of Angel's wings, for four Angels, made of timber, and well-painted. Item, the Fadre, the crown and visage, the well (sic, read ball) with a cross upon it, well gilt with fine gold. Item, the Holy Ghost coming out of Heven into the Sepulchre. ltem, longeth to the four Angels, four Chiveliers (Perukes).”


Jon Cannon added the documentation still survives at the Bristol Record Office: P.St MR/ChW/3/a. There are detailed published accounts in E.E. Williams, The Chantries of William Canynges in St Mary Redcliffe, Bristol, with a Survey of Chantries in General and some Events in the Lives of the Canynges Family (1950) and T. P. Wadley, Notes or Abstracts of the Wills Contained in the Volume Entitled the Great Orphan Book and Book of Wills in the Council House at Bristol (1886).

The Rites of Durham contains a description of the ceremonies observed in the cathedral there before the dissolution of the monastic chapter, and the particular ornaments and furnishing of the church at Easter which is very well worth reading - the sixteenth century spelling is no real barrier:


"Also there was a goodly monument pertaininge to the Church called the pascall* w ch was wont to bee sett upp in the quire (9) and there to remaine from the thursday called Maundye thursday' before Easter untill Wednesday after the assention day that did stand uppon a foure square thick planke of wood against the first grees or stepp hard behind the 3 basons of siluer that hung before the high altar, in the midst of the s d greese is a nick* wherein on of the corners of the s d planke was placed, and at euerye corner of the planke was an iron ringe wherunto the feete of the pascall were adioyned, representinge the pictures of the foure flyinge dragons, [att each Corner one, H. 45] as also the pictures of the 4 Euangelists [w th six faire Candlesticks for six tapers to stand in, H. 45] aboue the tops of the dragons underneath the nethermost bosse, all supportinge the whole pascall and [in] the 4 quarters haue beene foure Christall stones, and in the 4 small dragons 4 heads 4 christall stones as by the holes doe appeare and on euerye side of the 4 dragons there is curious antick worke as beasts and men uppon horsbacks with bucklers bowes and shafts, and knotts with broad leaues spred uppon the knotts uery finely wrought all beinge of most fine and curious candlestick mettall [or Latten* Mettal glistring as y c Gold it self having six Candlesticks or Flowers of Candlestick mettall, added by Dr. Hunter, in -^ s - < > ,s - the margin] coiiiinge from it three o( euerye side wheron did stand in euerye of the s d flowers or candlestick a taper of wax and on the height of the s d candlestick or pascall of lattine was a faire large tlower beinge the principall flower w^ 1 was the 7 candlestick, the pascall in latitude did containe almost the bredth of the quire in longitude that did extend to the height of the [Lower, H. 45] uault wherein' did stand a long peece of wood reach inge within a mans length [height, H. 45] to the uppermost uault roofe of the church, wheron stood a great long square tap of wax [a lardge square wax tap, H. 45] called the pascall a fine conueyance threoigh the s d roofe' of the church to light the tap withal! in conclusion the pascall was estimated to bee one of the rarest monuments in all England.

Within the Abbye Church of Durha uppon good friday [theire was, H. 45] maruelous solemne seruice, in the w ch seruice time after the passion was sung" two of the eldest [Ancient, Dav.] monkes did take a goodly large crucifix all of gold of the picture* of our sauiour Christ nailed uppon the crosse lyinge uppon a ueluett cushion, hauinge St. Cuth(io)berts armes uppon it all imbroydered w th gold bringinge that betwixt them uppon the s d cushion to the lowest greeces [stepps, H. 45] in the quire, and there betwixt them did hold the s d picture of our sauiour sittinge of euery side [on ther knees, H. 45] of that, and then one of the s d monkes did rise and went a prettye way from it sittinge downe uppon his knees with his shooes put o( uerye reuerently did creepe away uppon his knees unto the s d crosse and most reuerently did kisse it, and after him the other monke did so likewise [all v c other Monckes, H. 45], and then they did sitt them downe on euery [of evther, H. 45] side of the s d crosse and holdinge it betwixt them, and after that [them, H. 45 J the prior came forth of his stall, and did sitt him downe of his knees with his shooes of and in like sort did creepe also unto the S d crosse [and all the monkes after him one after an nother, in the same ms. Cos., order, and not in H. 45], in the meane time all the whole quire singinge an Himne, : the seruice beinge ended the two [two not in H. 45] monkes did carrye it to the sepulchre w th great reuerence, w ch sepulchre was sett upp in the morninge* on the north side of the quire nigh to the high altar before the seruice time and there did lay it within the s d sepulchre, with great deuotion with another picture of our sauiour Christ, in whose breast they did enclose with great reuerence the most holy and blessed sacrament of the altar senceinge [singinge, H. 45] and prayinge vnto it uppon theire knees a great space settinge two taper lighted before it, w ch tapers did burne unto Eas\er day in the morninge that it was taken forth.

There was in the abbye church of duresme uerye solemne seruice uppon easter day betweene 3 and 4 of the clocke in the morninge in honour of the resurrectio where 2 of the oldest monkes of the quire came to the sepulchre, beinge sett vpp upon good friday after the passion all couered with redd ueluett and embrodered with gold, and then did sence it either monke with a paire of siluer sencors sittinge on theire knees before the sepulchre, then they both risinge came to the sepulchre, out of the which w th great reverence they tooke a maruelous beautifull Image of our sauiour* representinge the resurrectio with a crosse in his hand in the breast wherof was enclosed in bright [moste pure, H. 45] Christall the holy sacrament of the altar, throughe the w ch christall the blessed host was conspicuous, (11) to the behoulders, then after the eleuation of the s d picture carryed by the s d 2 monkes uppon a faire ueluett cushion all embrodered singinge the anthem of christus resurgens* they brought to the high altar settinge that on the midst therof whereon it stood the two monkes kneelinge on theire knees before the altar, and senceing it all the time that the rest of the whole quire was in singinge the fores d anthem of Xpus resurgens, the which anthem beinge ended the 2 monkes tooke up the cushines and the picture from the altar supportinge it betwixt them, proceeding in processio from the high altar Ms - Cos. to the south quire dore where there was 4 antient gentle- men* belonginge to the prior appointed to attend theire cofningc holdinge upp a most rich cannopye of purple ueluett tached* round about [tashed about, L., C] with redd silke, and [a goodly, Dav.] gold fringe, and at euerve corner did stand one of theise ancient gentlemen to beare it ouer the s d Image, with the holy sacrament carried by two monkes round about the church the whole quire waitinge uppon it with goodly torches and great store oi other lights, all singinge reioyceinge and praising god most deuoutly till they came to the high altar againe, wheron they did place the s d Image there to remaine until! the assencion day.

There was a nother crosse of Xpall* that serued for euerve day in the weeke, there was borne before the crosse euerve principall day a holy water font [fatt, H. 45] of siluer* uery finely grauen and pcell gilt, which one of the nouices* did carrye." 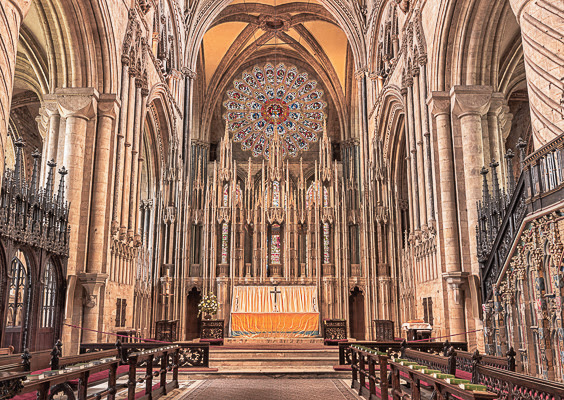 The High Altar and choir of Durham cathedral

Just the sort of text to make you deplore the antics of the so-called reformers...