Ring with a White Hart

A while ago I came across an online post from archaicwonder.tumblr.com about a late medieval gold signet ring with a hart engraved on the bezel. The article has nothing about the provenance of the ring nor its present whereabouts, which is to be regretted. It assigns an early fifteenth century date to what is a very fine item. The article, with photographs, can be viewed below: 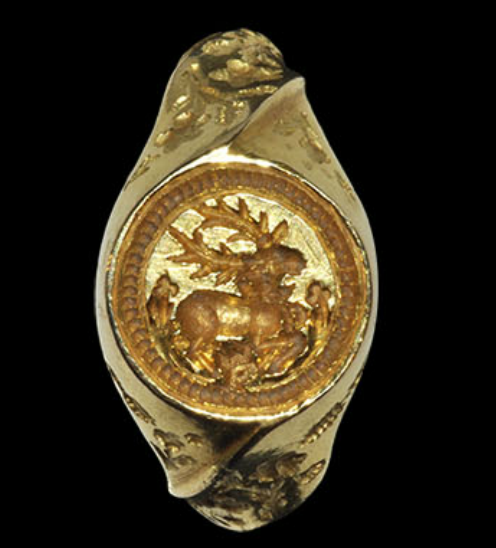 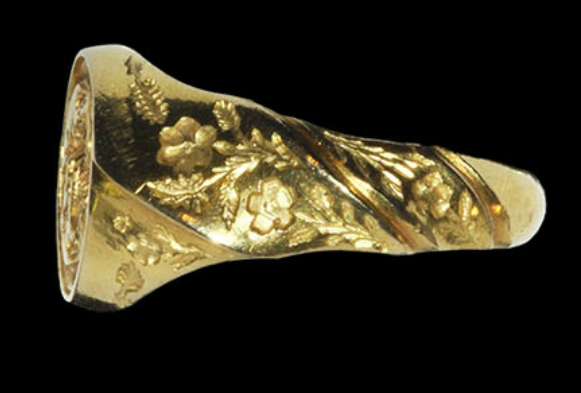 The surname Hart (or le Hart, Harte, Hartman, etc.) is of medieval origin and derives from the frequent use in this period of nicknames that give a punning allusion. The nickname ‘hart’ comes from the pre-7th century 'heorot’ and would suggest that the bearer is fleet of foot. Such gold rings were most likely not worn directly on the flesh of a finger but rather would have habitually been worn over a leather glove by a member of the nobility and probably reserved for wear on important social or ceremonial occasions.

This is a substantial finger ring with D-section hoop shoulders decorated with diagonal scrolling bands, the concave portions ornamented with five-petaled pansies and foliage, expanding shoulders; the circular bezel bearing the cut signet seal design of a hart (stag) couchant with large antlers, collared and chained with a three-petaled lily with leaves in the field each side, with black letter 'ht’ monogram below being a punning abbreviation of the name Hart.

I was slightly surprised that the article assumes that the ring was the property of  someone with the surname Hart - which is perfectly possible of course - and has not associated it with the widespread use in the 1390s by King Richard II and his court of his chosen badge of the White Hart. Itsll ever more ubiquitous use was noted by the ‘Lollard Petition’ of 1395. Given the quality of the ring I am tempted to wonder if this is an item from that cultured world and perhaps once the property of a member of the King’s household.