I was notified this morning of the death early today of the Rev David Johnson. May he rest in peace.

David, who was 66, had been in poor health for several years and his death not unexpected. I am sure that in coming days obituaries will appear which will attempt to recount a complex and often, I suspect, profoundly sad life, shaped by disappointment at the frustration of promise unfulfilled. A former President of the Cambridge Union he had been on the staff of Archbishop Robert Runcie ( to whose memory he was devoted ) at Lambeth and a minor canon of Westminster Abbey. Rural ministry afterwards in the dioceses of Leicester and Peterborough was not to be a success. As he once said to me in his distinctive clipped and rasping voice “Those whom the gods wish to destroy they first call promising.” On another occasion he asked me “John, do you think it would have helped me in my ministry if I had actually liked people?”

Such is often the story of gifted comics, and David was true to that trope. At his best as a raconteur he was one of the funniest people one could encounter, and I for one regretted - as his speech was taken by successive strokes - that I would never again hear him recount the discussion by the deanery clergy in west London, chaired by the future Bishop Richard Harries, of charismatic healing through the laying on of hands. That reduced me to tears of laughter, even when one had heard the story several times before.

I met him through the Oxford Union and our friendship was certainly spiced with barbs. His many friends and acquaintances will have a fund of stories, many unintelligible to those who did not know him, his friends and foes and the particular world of the Church of England, and not a few verging on the unrepeatable.

He has however left two classic pieces of ecclesiastical humour that have become classics of their kind. The first is from 1982 when with three other clergymen phe produced “Not the Church Times” - inspired by the “Not The Times” of 1979. It can be viewed, courtesy of St Bartholomew the Great Smithfield, at /NottheChurchTimes.

His other published success - Blackwells in Oxford sell it in the Pastoralia section in their Theology department - was produced with Toby Forward and was inspired by “The Henry Root Letters”. The spoof letters sent to Anglican bishops, and their replies, not to mention ecclesiastical suppliers - orange cassocks and silver foxfur almuces for the pro-cathedral on the fish dock in Hull spring to mind - and others, culminated in a meeting to discuss it presided over by Archbishop George Carey. According to David the Archbishop said, “ Well at least I haven’t replied to one of these letters”. At this his chaplain said, “Well actually Your Grace...”
Reviews 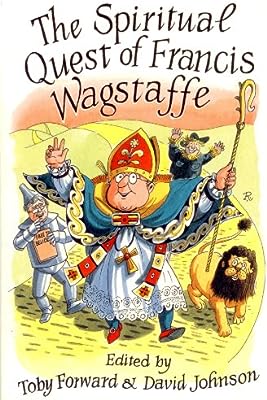 I knew David through the Cambridge Union. As you say a wonderful raconteur and speaker but I suspect a rather lonely man in spite of a wide circle of acquaintances.

This was an accurate and remarkably forgiving profile of the most unpriestly priest since the Borgias.

I noticed Andrew Lownie s comments. Mr Lownie I have read a number of your books. I would love to meet you. Could you please email me at georgecallaghan79@gmail.com?