I have always enjoyed my visits to Evesham, both as a historian and as a pilgrim. The great Benedictine abbey originated with the vision of Eoves, the swineherd who was to give his name to the town, who had a vision of Our Lady there about 705 - one of the earliest recorded examples. The vision was also granted to St Egwin, Bishop of Worcester, who went on to found the abbey as the Virgin had chosen the place. The continuous history of the abbey can be traced from the tenth century monastic revival down to its dissolution early in 1540 - one of the very last houses to be suppressed. Even then, in a sense, it continued - one of the monks, John Feckenham, was to be Abbot of Queen Mary I's revived foundation at Westminster, the last of whose monks transferred his rights to the English exile monks who established Dieulard, which was to return to England later and to settle at Ampleforth.

The scale of destruction at Evesham is shocking and moving, with the bell tower and a few fragments alone surviving to indicate the site of the abbey, although the Almonry Museum has excellent, if tantalising, displays of finds and manuscripts, as well as a rather splendid model reconstruction. 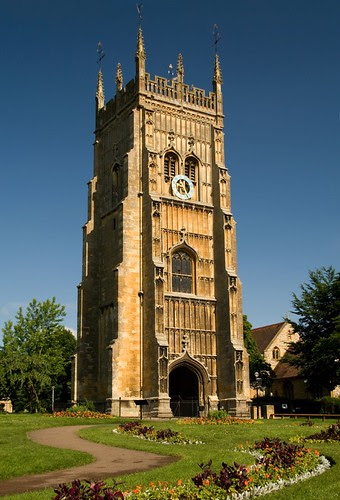 Now my old Oriel friend David Kendrick, a native of Evesham and who works for the Worcestershire Museums service, has published a substantial booklet on his interpretation of the architecture and setting of the abbey. David has considerable experience of such studies having worked on such major medieval monastic churches as Tewkesbury and Dorchester. I hope his book, which I have not yet seen, will increase awareness of the history of the site and its potential for further research. He has published the book himself and to order it click here.