Today is the 570th anniversary of the birth of the future King Richard III at Fotheringhay Castle. 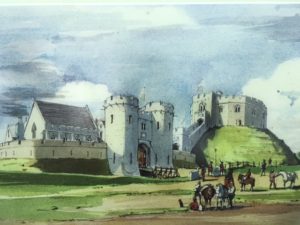 A reconstruction of the northern aspect of Fotheringhay Castle
Image:thehistoryofengland.co.uk

A reconstruction of Fotheringhay Castle from the south-east by Julian Rowe
Image: Richard III Society by permission of Peter Hammond

A plan of the site of Fotheringhay Castle
Image: abitaboutbritain.com
The always informative site of The Tudor Travel Guide has an article which draws together material about the lay out and appearance of the castle, in particular as it would have been in 1587 when Mary Queen of Scots was beheaded there, which can be viewed at Fotheringhay Castle: The Final Dark Act of a Scottish Tragedy
It does, unfortunately, refer several times to the  capitular clergy of the collegiate church as “monks” - which, of course, they were not.
The tower and nave, all that survives, alas, of the ducally sponsored collegiate church, and where the infant Richard was probably baptised, is adjacent and dominates the landscape. However the surviving part was probably built after 1452, though certainly in Richard’s adolescence and early twenties.
Fotheringhay seems to have been a favourite place for the Duchess of York to chose to give birth, at least six of her and Duke Richard’s children were born there - Anne, Duchess of Exeter ( the ancestor of those who gave mitochondrial DNA to identify her brother when he was found in the Leicester car park ) in 1439, Margaret Duchess of Burgundy in 1446 and Richard in 1452, as well as William, Thomas and Ursula who were born in 1447, 1451, and 1455 respectively, but died who all died in infancy. The Duchess herself was to outlive all her sons, and of the four who did reach maturity only one, King Edward IV, died in his bed. His death was to spell the beginning of the process that took his brother to Bosworth.
The England into which the latest York infant was born was a troubled land. Two years earlier Jack Cades’s Kentish uprising had swarmed briefly into London before being suppressed with a belated show of force by the government. 1451 the remaining English lands in France had fallen to the armies of King Charles VII in both Normandy after the battle of Formigny and in Guienne.  Politics at home was driven by reactions to the situation in France, rival Dukes from the cadet branches of the royal family vying for power around the still childless King Henry VI.
One of those competing players as the new born baby’s father, the Duke of York. In his eyes, and those of his supporters he was next in line to the throne after the King, yet enjoyed little of the influence he thought he should exercise. The King seemed unlikely to extend that to him, preferring the company and advice of his closer blood relatives, the Beaufort Dukes of Somerset - who may well have thought they had a claim as good, if not better than, that of York, to the throne.
The prospects for the Duke of York were not very good at Christmas 1451. His military  intervention after Cade’s rebellion by returning from Ireland had not been well received, an attempt to get him declared heir to the throne had been clearly rebuffed and his client Sir William Oldhall had been imprisoned. The Duke’s attempts to try to flex his political muscle had seemingly failed.
His son Richard was probably conceived over the Christmas holiday at Ludlow - the Duke his father was definitely at the castle there on February 3 when he set in motion by letters his latest moves against his bitter rival Somerset. That scheme, backed by his retainers no doubt, and by the Earl of Devon and Lord Cobham ended in a humiliating failure at the beginning of March at Dartford in Kent. The Earl of Devon and his sons were thereafter committed to the Lancastrian cause - a cause in which all three sons died bloody deaths.
York’s day was, of course to come in October 1460 when he was declared heir to the throne. Two months later he, his second son Edmund and several of his prominent supporters were killed at the battle of Wakefield. The Wars of the Roses had entered their boodiest phase, and although two of York’s sons were to wear the Crown, yet the actions of one of them, the son born 570 years ago brought the Yorkist edifice crashing down. Not quite a case of like father, like son but two men, said to be similar in appearance, perhaps similarly motivated to press on regardless of consequences. Consequences in the fifteenth century could be bloody, violent and fatal. 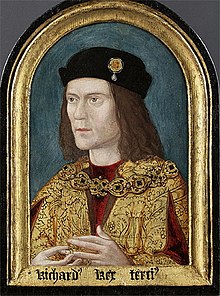 King Richard III
The earliest surviving painting, c.1520
Image: Society of Antiquaries/Wikipedia
For a monarch who ruled for a little over two years and was defeated and killed on the battlefield - the first English king to suffer such a fate since 1066 - King Richard III remains very much in the public consciousness. It is of course try that his defeat and death brought to the throne a branch of the royal line who stamped their authority upon England and upon the emerging English-speaking world. Without King Richard destabilising the Yorkists who knows what might, or might not have happened. Without King Richard III no King Henry VII?
The latest instance of this fascination with his brief life and reign is the publicity around the new film The Lost King. I posted recently in “The Lost King” about this. In that piece I link to a lengthy and well researched article available on the Mail Online website about the veracity of the film. Yet today my algorithm sent me a very positive piece about the film from the same newspaper. It can be seen at New film tells true story of the woman who found Richard III's bones.  The debate about all aspects of the king, his reign, the man under the crown and inside the armour shows no sign of abating.
There is, I found, an excellent and succinct article about the King from The Conversation written by Professor Philippa Maddern. This was written as a response to statements made on behalf of the Richard III Society. It can be viewed at Bones of contention: why Richard III's skeleton won't change history
Posted by Once I Was A Clever Boy at 18:35