The Coronation of King Richard II


Today is the 640th anniversary of the coronation of King Richard II in Westminster Abbey on July 16 1377.

The chronicler of St Albans Abbey Thomas Walsingham wrote of it as "a day of joy and gladness.... the long-awaited day of the renewal of peace and of the laws of the land, long exiled by the weakness of an aged king and the greed of his courtiers and servants" - as translated in May McKisack The Fourteenth Century.

The most recent piece on the occasion appears to be by Andrew Spencer 'The Coronation Oath in English Politics 1272-1399' in B.Thompson and J.Watts (eds) Political Society in Later Medieval England: A Festschrift for Christine Carpenter ( Boydell 2015 ) which can be accessed here

As Spencer points out Walsingham recorded that although only the magnates could hear the boy king assent to the Coronation Oath Archbishop Sudbury, preceded by the Marshal, repeated it to all in Abbey, asking if would accept to be so ruled.

The rubrics were revised to stress the authority of the monarch and the touching of the Crown of St Edward  by the peers when they made their homage glossed as indicating their responsibility to support the Crown.

The ceremony was a long one and at the end the ten and a half year old King had to be carried from the Abbey to his Coronation banquet in Westminster Hall in the arms of Sir Simon Burley his tutor. This story is perhaps the beginning of the emergence of Burley and what may be his 'myth' - whether Sir Simon was just the devoted retainer of the boy King's father who was  consequently dear to the monarch who tried to save him in 1388 from the Lords Appellant is a topic historians are nowadays questioning.

It was probably at this point that the King lost one of his ceremonial slippers, which came to be seen as a bad omen - but such mishaps do occur and may be no more than that, and secondly such are the things people remember; King Charles I's choice of wearing all white to his coronation became seen as a forecast of his future status as the Royal Martyr, the King in White who reigned in the Isle of Wight, or the fact that a large precious stone fell out of King George III's crown at his coronation was remembered when the American colonies rebelled.


The most recent work on the Wilton Diptych suggests that the crown the King is depicted wearing may indeed be the one he wore for the recess from the Abbey, and that it was one that had been made for the youthful King Edward III. 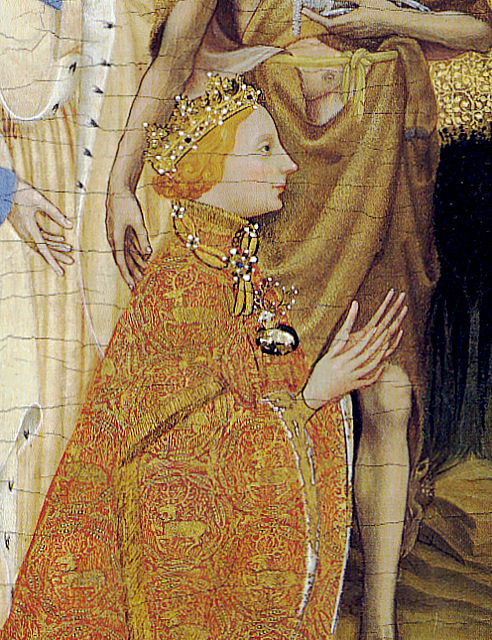 Apart from the impact on those who witnessed it the most important question that arises is probably that of the impact upon the young King Richard himself. Westminster remained central to his personal spirituality and to the spirituality of his kingship, the shrine of St Edward and the recipient of his patronage, including the portrait of him presiding in Parliamentary robes with his regalia which still survives in the Abbey. Here too the crown, identical to that on the tomb effigy of his supplanter and successor King Henry IV at Canterbury, is clearly a depiction of a real item, not just an artistic convention. Shakespeare's dramatic account of the events of 1398-9 quite rightly stresses the imagery and discourse of Kingship and Deposition and central to that is the status of King Richard II as an anointed crowned monarch. That complex narrative was played out in and around Westminster over the following twenty two years, and symbolically at least it began with the rich ceremonial of this day in 1377.