Lucy (d. 304, supposedly; usually referred to without geographic specification, the others all having their own identifiers) is an early martyr of Syracuse. Her cult is first attested from the late fourth- or early fifth-century epitaph of Euskia, a woman of about twenty-five years of age who was laid to rest at Syracuse in the Christian cemetery now known as that of San Giovanni and who, in the words of her husband, anepauseto te heorte tes kyrias mou Loukias ('died on the feast of my lady Lucy'). Here's a view of the epitaph:

A reproduction of the inscription with the letters miniated for ease in reading (and with an Italian-language translation) is here:
http://tinyurl.com/hbcjwgq
The inscription is no. 20 in Santi Luigi Agnello, Silloge di iscrizioni paleocristiane della Sicilia (Roma: "L'Erma" di Bretschneider, 1953), with the edited text on p. 23 and commentary on pp. 65-66.

Seemingly from the fifth century is the oldest known version of Licy's Passio (BHG 995). This makes her an affianced young woman of Syracuse who has vowed secretly to remain virginal and who makes a pilgrimage with her mother to the tomb of St. Agatha at Catania. At Lucy's suggestion her mother, who suffers from an incurable flux, touches the tomb and is healed. Agatha appears to Lucy in a vision and reveals that it was really Lucy's faith that operated this cure. Lucy then reveals to her mother her desire to remain virginal and begins to live in poverty as well. This displeases Lucy's fiancé, who reports her to the authorities as a Christian (this is during Diocletian's persecution). Lucy is arrested, refuses to sacrifice to the gods of the state, predicts the downfall of Diocletian and Maximian, is sentenced to serve in a brothel (but a team of bullocks is unable to pull her there), undergoes tortures, and is decapitated. A church is built over her grave.

In the sixth century Lucy's cult is first documented from peninsular Italy, where she appears along with St. Agatha in the procession of the virgin martyrs in Ravenna's basilica di Sant'Apollinare Nuovo (mosaics dated to ca. 561) and in the Nobis quoque of the Roman canon of the Mass (first documented from the seventh century in a form that had undergone revision; according to St. Aldhelm, Agatha and Lucy were added by pope St. Gregory the Great). By the end of the sixth century there were monasteries dedicated to Lucy in Syracuse and in Rome. By the end of the seventh century a Latin version of her originally Greek Passio had come into being (BHL 4992; adapted by Aldhelm in his De virginitate). A Mass for Lucy first appears in the Gregorian Sacramentary.

BHL 4992, which became standard in the medieval Latin West, is usually faithful to its Greek predecessor but changes Lucy's manner of death to a sword blow that allows her to live long enough to receive the Eucharist before expiring. In the ninth century Lucy was the subject of a kanon (a lengthy hymn form) by St. Methodius I, a native of Syracuse and Sicily's only patriarch of Constantinople, and in the same century her Greek Passio was revised and expanded at Syracuse in a form (BHG 995d) that seems generally not to have supplanted its predecessor. In the eleventh century another kanon honoring Lucy was composed by St. Bartholomew of Grottaferrata. An Italian-language translation of that is here:
http://tinyurl.com/29prrt4

Only in the fourteenth century does the story appear whereby Lucy blinds herself in order to deter a persistent suitor (to whom she then sends her eyes). To judge from early references, some version was already in existence before then. Lucy occurs three times in Dante's Commedia (Inferno 2. 94-117; Purgatorio 9. 52-63; Paradiso 32. 136-38); in the first two instances her eyes are singled out for attention. The Latin noun lux, lucis denotes 'light' but has extended meanings of 'insight' and 'eyesight'; all of these were associated with Lucy, either spiritually or metaphorically or in connection with problems with one's eyes. A similar progression is observable in the case of the Greek St. Photeine ('Luminous', 'Enlightened'), who like Lucy became a patron of those with disorders of the eye.

Some period-pertinent images of St. Lucy:

a) as depicted (second from right) in the heavily restored later sixth-century mosaic of the procession of virgin martyrs (c. 560) in the nave of Ravenna's basilica di Sant'Apollinare Nuovo:
http://tinyurl.com/nee8jwn

e) as depicted on a seemingly earlier to mid-thirteenth-century map of part of the Atlantic Ocean and the Mediterranean (c. 1234-1266; Lyon, Bibliothèque municipale, ms. 175, sheet 7):
http://www.enluminures.culture.fr/Wave/savimage/enlumine/irht8/IRHT_125815-p.jpg

f) as depicted (with the bullocks) in a panel of a mid-thirteenth-century ambulatory window of the cathédrale Saint-Julien, Le Mans (Bay 109, panel C3):

k) as depicted (at right) in a late thirteenth-century fresco (1292, conjecturally) in the rupestrian chiesa (or cripta) di Santa Lucia dei Giaconelli near Melfi:
http://www.oltrefreepress.com/public/uploads/2012/01/santa-lucia_melfi.jpg

o) as depicted (at right; at left, St. Catherine of Alexandria) by Simone Martini in an earlier fourteenth century panel painting (between 1320 and 1325) in the Bernard Berenson Collection in the Villa i Tatti at Settignano:

p) as depicted (with the bullocks) in an earlier fourteenth-century French-language legendary of Parisian origin with illuminations attributed to the Fauvel Master (c. 1327; Paris, BnF, ms. Français 183, fol. 108r):
http://tinyurl.com/ycpb6bg

r) as depicted by Niccolò di Segna in an earlier fourteenth-century panel painting (c. 1340) in the Walters Art Museum, Baltimore:

s) as depicted (at left; at right, St. Agatha at her tomb) in a mid-fourteenth-century copy, from the workshop of Richard and Jeanne de Montbaston, of the Legenda aurea in its French-language version by Jean de Vignay (1348; Paris, BnF, ms. Français 241, fol. 13v):
http://tinyurl.com/ydur7v5

t) as depicted (lower register at far right) by Giovanni da Milano in a mid-fourteenth-century panel painting (c. 1350-1355) in the National Gallery, London:

u) as depicted (at left; at right, St. Peter) by Nardo di Cione in a predella panel of his mid-fourteenth-century Bojnice altarpiece (after 1350) belonging to the Bojnice Castle Museum, Bojnice (Trenčíansky kraj), Slovakia (when this photograph was taken in 2013 the altarpiece was on display in the Slovak National Gallery in Bratislava):
https://www.flickr.com/photos/48460764@N06/16926916619

v) as depicted (at right; at left, St. Catherine of Alexandria) by Giovanni da Milano in a panel from his mid- or slightly later fourteenth-century Ognissanti polyptych (before 1365) in the Galleria degli Uffizi, Florence:
http://ww.wga.hu/art/g/giovanni/milano/panels/ognissa1.jpg

x) as depicted (scenes from her Passio) by Giovanni di Bartolommeo Cristiani in four later fourteenth-century panel paintings (from the same dismembered altarpiece) in the Metropolitan Museum of Art, New York:
http://www.metmuseum.org/toah/hd/iptg/ho_12.41.1-4.htm

z) as depicted (in an initial 'A': receiving communion; to the right of the initial: with the bullocks) in the later fourteenth-century martyrology and obituary of the abbey of Notre-Dame des Prés in Douai (c. 1376-1400; Valenciennes, Bibliothèque de Valenciennes, ms. 838, fol. 128r):
http://www.enluminures.culture.fr/Wave/savimage/enlumine/irht5/IRHT_092339-p.jpg

cc) as depicted in a fifteenth-century fresco in the chiesa di Santa Maria a Piazza in Aversa (CE) in Campania:

http://tinyurl.com/nufhqhp
Look closely at the chalice!

dd) as depicted (scenes from her Passio) by Jacobello del Fiore in eight early fifteenth-century panel paintings (c. 1410; from a dismembered altarpiece) in the Polo Museale Palazzo dei Priori, Fermo:

1) Lucy (second from left; at left her mother) experiencing her vision of St. Agatha:

gg) as depicted by Domenico Veneziano in a mid-fifteenth-century panel painting (c. 1445) in the Gemäldegalerie, Berlin:
https://www.flickr.com/photos/mazanto/14799616105

jj) as depicted (scenes from her Passio) by the Master of the St. Lucy Legend in a later fifteenth-century panel painting in the Sint-Jacobskerk in Brugge / Bruges:

kk) as depicted (standing, plus scenes from her Passio) by Quirizio da Murano in a later fifteenth-century panel painting (c. 1462-1478) in the Pinacoteca dell’Accademia dei Concordi in Rovigo:

ll) as depicted (scenes from her Passio) in a later fifteenth-century copy of Vincent of Beauvais' Speculum historiale in its French-language version by Jean de Vignay (1463; Paris, BnF, ms. Français 51, fol. 95v):
http://tinyurl.com/yayharg

mm) as depicted by Cosimo Rosselli in a later fifteenth-century panel painting (c. 1470) in the San Diego Museum of Art:

http://tinyurl.com/qjq8xrr
Look closely at the lamp!

nn) as depicted (at right; at left, St. Anthony of Egypt) by Carlo Crivelli in a later fifteenth-century panel painting (1470) in the Czartoryski Museum in Kraków (click on the image to expand it):
http://pintura.aut.org/SearchProducto?Produnum=133012
This is from Crivelli's now dismembered Porto San Giorgio altarpiece. There is a larger view here:

oo) as depicted by Francesco del Cossa in a later fifteenth-century panel painting (c. 1473-1474) in the National Gallery of Art, Washington, DC:
http://www.nga.gov/content/ngaweb/Collection/art-object-page.369.html 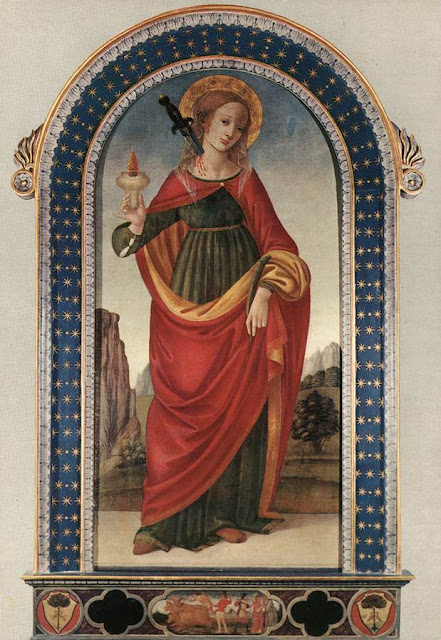 ss) as depicted by Carlo Crivelli in a late fifteenth-century panel painting (c. 1490) in the Musée du Petit Palais, Avignon:

vv) as depicted (at foot of the page) in the late fifteenth- or early sixteenth-century Hours of Bonaparte Ghislieri (London, BL, Yates Thompson MS 29, fol. 9r [in the calendar]):
http://www.bl.uk/manuscripts/Viewer.aspx?ref=yates_thompson_ms_29_f009r

as depicted (at upper right) by Jacopo Torriti (attrib.) in a late thirteenth-century panel painting (from a dismembered altarpiece formerly in Rome's chiesa di Santa Lucia in Selci) in the Musée de Grenoble:
http://tinyurl.com/qaskyqm

as depicted in a later thirteenth- or early fourteenth-century fresco in the oratorio di San Bernardo at Briona (NO) in Piedmont:
http://tinyurl.com/d2kzzj3
Detail view (Lucy):

as depicted (at left; at right, the BVM and Christ Child) in a later fourteenth- or early fifteenth-century fresco, restored in the 1960s, in the abbazia di Santa Lucia at Rocca di Cambio (AQ) in Abruzzo:

NB: This church was badly damaged by the massive earthquake of 6. April 2009 in the Aquilano and this image of Lucy (there is also a series of frescoed scenes from her Passio) was not spared. A photograph (taken in early August of that year) showing it sheathed in protective paper will be found in the right-hand-column here, fifth from the bottom:
http://foto.inabruzzo.it/terremoto/Rocca-di-Cambio/index.html

as depicted (at left; at right, St. Jerome) in a later fifteenth-century fresco in the chiesa di San Giorgio in Lemine in Almenno San Salvatore (BG) in Lombardy:
http://upload.wikimedia.org/wikipedia/commons/6/66/SGiorgio3.jpg

as depicted (at centre, between St. Martha and St. Catherine of Alexandria) in a later fifteenth-century fresco (between 1460 and 1480) in the pieve di San Lorenzo at Settimo Vittone (TO) in Piedmont: 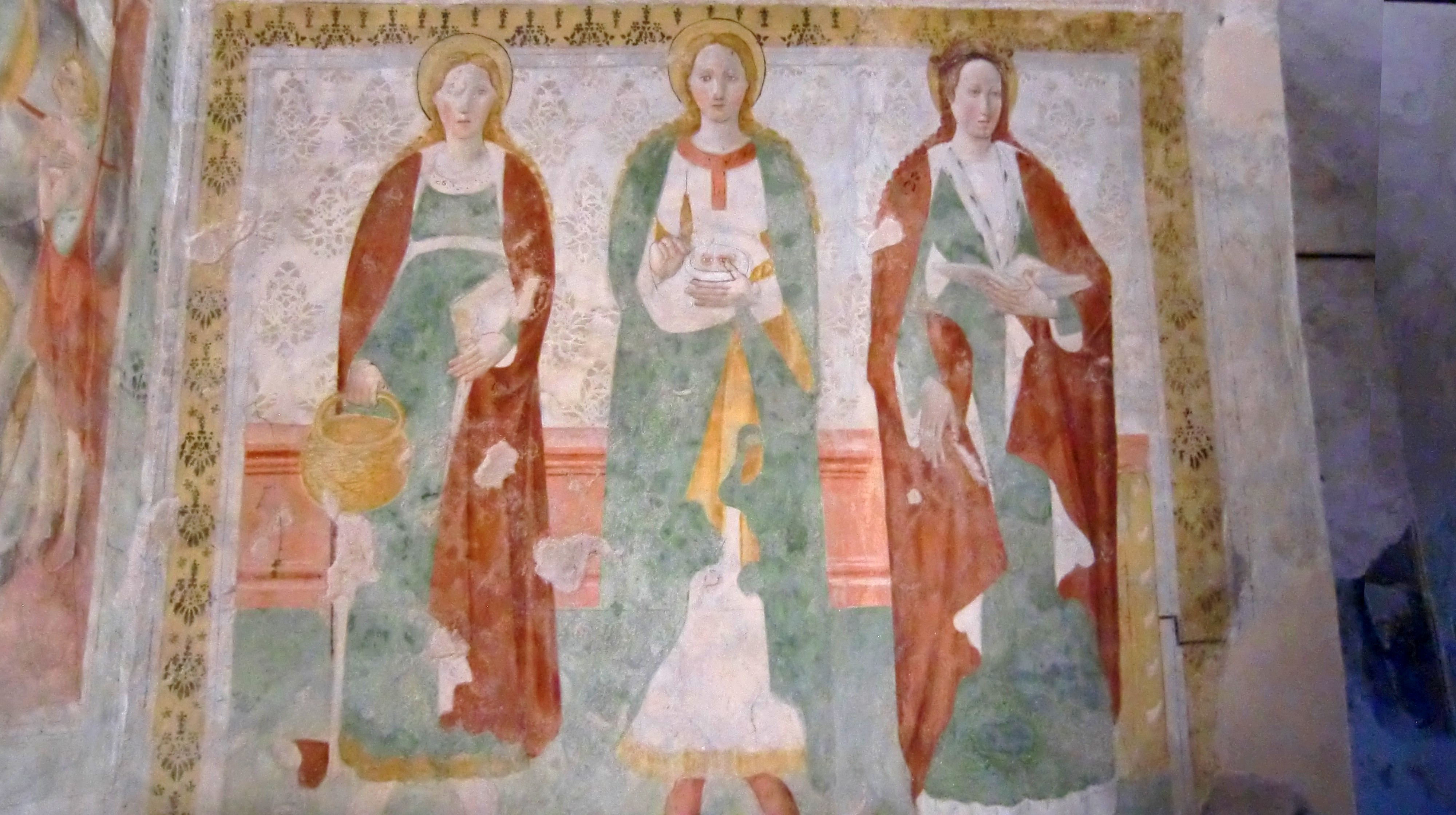 as portrayed by the Maestro della Madonna di Macereto in a late fifteenth- or early sixteenth-century polychromed wooden statue in the Museo diocesano in Camerino (click on the image to enlarge it):

as portrayed in relief by Andrés de Nájera on a bench end on his earlier sixteenth-century choir stalls (c. 1525-1529) for the Monasterio de San Benito el Real in Valladolid, now in the Museo Nacional de Escultura in the same city: