St James of the March


November 28th was the feast day of the Franciscan St James of the March. John Dillon posted the following piece on the Medieval Religion discussion group:

James of the March (Giacomo della Marca; Jacobus Picenus) was born at Monteprandone in today's Ascoli Piceno province of the Marche. He was christened Domenico and studied first at Ascoli Piceno and then at Perugia, where he obtained doctorates in civil and in canon law. After a few years in minor posts at Florence and at Bibbiena he entered the Franciscan order in 1416 at the convent of Santa Maria degli Angeli at Assisi. There he took the Christian name by which he is known and studied under St. Bernardino of Siena.

James was ordained priest in or shortly after 1420 and began to preach extensively in north central Italy, founding as he went numerous Monti di Pietà (low-interest pawn and credit funds), which latter the Franciscans were promoting actively. He also travelled widely in northern and eastern Europe, both as a diplomat and as an inquisitor. From 1435 to 1438 James was his order's vicar in Bosnia. In the 1450s he preached crusade against the Turks; in 1456 he succeeded St. John of Capestrano in János Hunyadi's campaign in Bosnia and Serbia. Back in Italy he continued to preach and was also called upon to resolve numerous local disputes. In his last few years James was based at Naples. He was buried there at the Franciscan convent of Santa Maria La Nova; miracles were reported at his tomb and in fairly short order his remains were given an Elevatio. James was canonized in 1726. His largely incorrupt body reposed in Santa Maria La Nova until 2001, when it was translated to the convento / santuario di Santa Maria delle Grazie in Monteprandone.

James is one of Naples' patron saints. An early poem (Elegiae, 1. 7) by the late fifteenth- and early sixteenth-century Neapolitan humanist Jacobo Sannazaro honors him.

James founded the aforementioned convent of Santa Maria delle Grazie in his native Monteprandone in 1449. The convent's library, now city property and housed in Monteprandone's Museo civico dei Codici di San Giacomo della Marca (housed in the Palazzo comunale), has a nucleus of manuscript books that once belonged to the saint, including four so-called autographs that are really working texts dictated by him. Most of James' sermons have not been edited but the two published in the the conference volume San Giacomo della Marca nell'Europa del '400 (Padova: Centro Studi Antoniani, 1997) show considerable skill. (James was given to quoting pertinent bits of Italian poetry in these Latin texts: at least one has a few lines from Dante and many quote Laude by or attributed to Jacopone of Todi). [Sounds rather like St Philip Neri - Clever Boy]

Herewith some views of the library and of selected contents:
http://giornale.regione.marche.it/archivio/num0102/foto17a.htm
http://www.sangiacomodellamarca.net/o_sgiacomo/manoscritti.jpg
Expandable views of pages from individual codices are at lower right here:
http://www.sangiacomodellamarca.net/biblioteca_san_giacomo.htm#target
Other views (also expandable)
http://tinyurl.com/ozfkmu4
http://web.tiscali.it/corradettiivan/text/allcodici.htm

At Monteprandone one may also see a house where James is said to have been born:
http://web.tiscali.it/corradettiivan/images/fotogr3.gif
Also at Monteprandone, in the Museo del Santuario di San Giacomo della Marca, one may see various objects said to have been his. The last four images (all expandable) on this page are of a chalice, two crucifixes, a chest for relics, and an ivory triptych said to have belonged to James.:
http://web.tiscali.it/corradettiivan/text/allfoto.htm
More views (also expandable) are at lower right here:
http://www.sangiacomodellamarca.net/MUSEO.htm

Some period-pertinent images of St. James of the March:

b) as depicted in a later fifteenth-century panel painting by Carlo Crivelli (1487; Venice, Gallerie dell'Accademia):
http://www.beniculturali.marche.it/Ricerca.aspx?ids=53205

The similarity among the foregoing portraits is probably the result of the circulation among Franciscan houses of copies of James' death mask. One may compare the similarly uniform later fifteenth-century Italian portraiture of St. Bernardino of Siena (20. May; d. 1444; canonized, 1450).

g) as depicted (at right; at left, St. Jerome; at centre, the Archangel Michael) in a late fifteenth-century panel painting by an Italo-Flemish artist (c. 1490; Naples, Museo nazionale di Capodimonte): 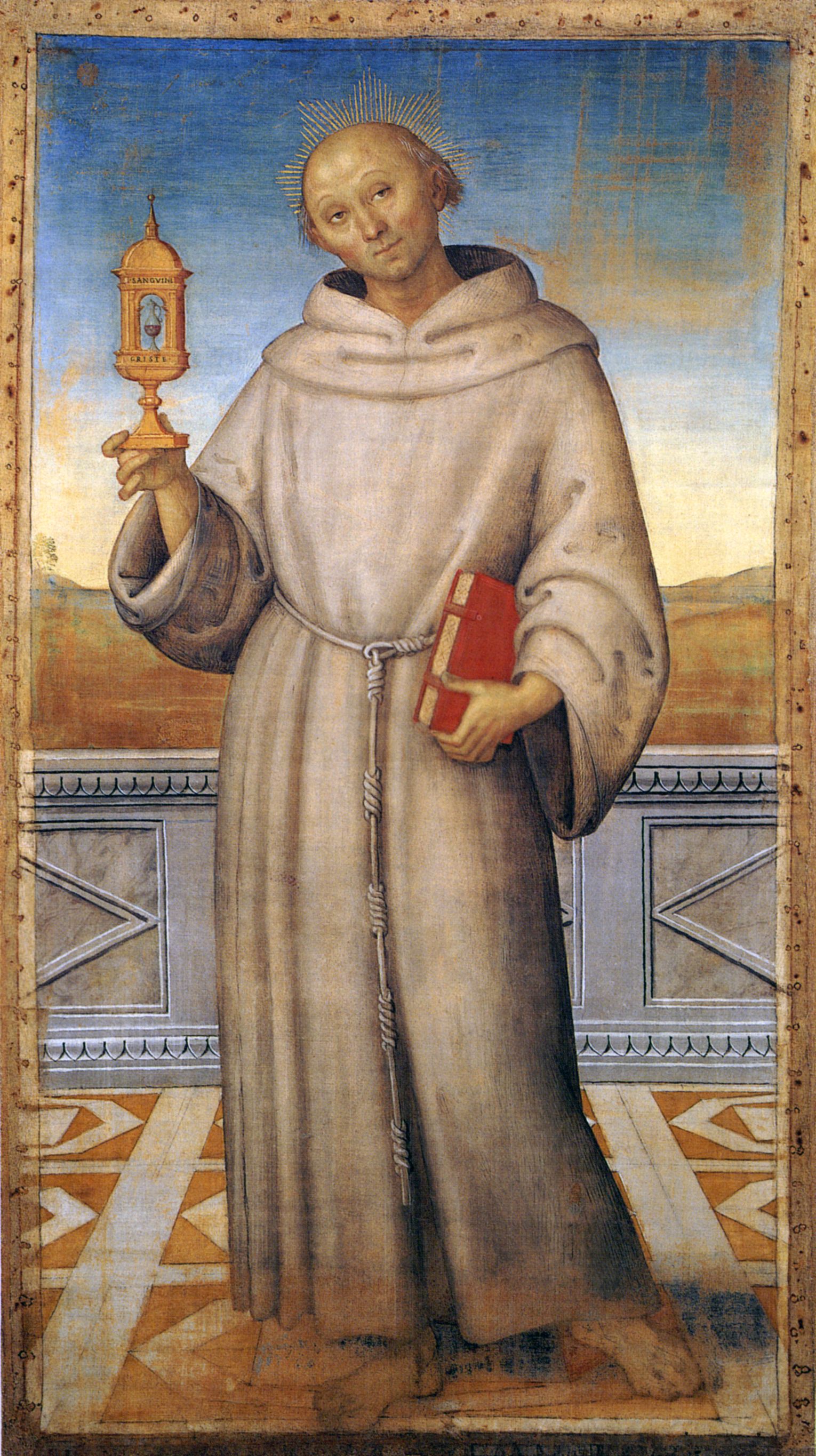 j) as portrayed in high relief (at right; at left, St. Francis of Paola; at center, the Baptism of Christ) by Giovanni da Nola in an earlier sixteenth-century marble sculpture (1534) in the Ravaschieri chapel of Naples' basilica di San Giovanni Maggiore: