St John the Evangelist in art


Here are a selection of some western high and late medieval images of St John the Evangelist linked to by John Dillon in a post for today's feast on the Medieval Religion discussion group. 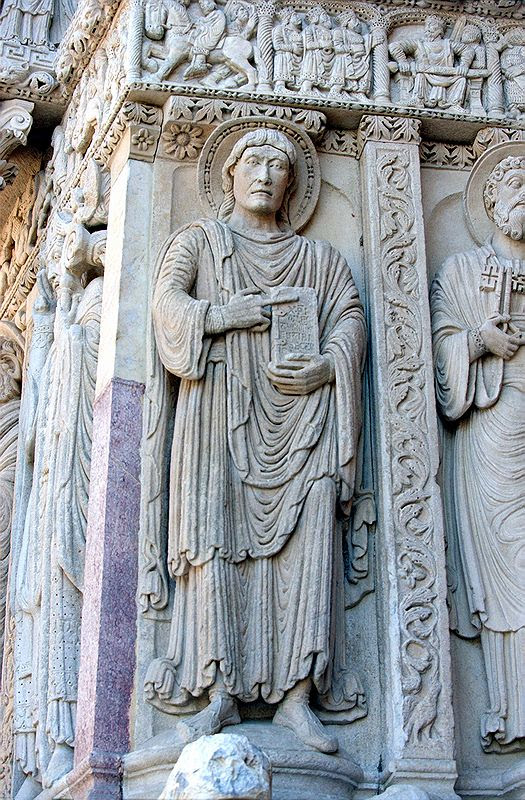 From  the late twelfth-century portal (between 1180 and 1190; restored between 1988 and 1995) of the église primatiale Saint-Trophime in Arles

The series of panels early thirteenth-century Life of St. John the Evangelist window (bay 22; c. 1215) in the cathédrale Saint-Étienne in Bourges can be viewed at http://www.medievalart.org.uk/bourges/22_pages/Bourges_Bay_22_key.htm

St John portrayed in a statuette (second from left, starting with the BVM around the corner) in the earlier thirteenth century Mary Shrine (consecrated, 1239) in the cathedral treasury in Aachen St John portrayed in a silver gilt statuette on the later thirteenth-century copper gilt châsse of St. Remaclus (completed between 1263 and 1268) in the église Saint-Sébastien in Stavelot

Only the upper part of this painting of St. John the Evangelist is now left on the south side beside the chancel arch at Weston Longville. In the corresponding position at the north side is John the Baptist, who is very faint now.
The painting has been restored, but St. John was probably always an impressive figure. He is shown here holding the most interesting of his attributes, a poisoned cup or chalice. According to his legend, John was ordered to drink from the cup as a test of his faith by the High Priest of Diana at Ephesus. Two condemned prisoners had already done so and died. John drank and survived unharmed, further demonstrating his power by restoring the two poisoned men to life. More often than not in painted versions of the story, a serpent or small dragon is shown emerging from the cup, to make the meaning intelligible. Here indeed is a small dragon, apparently uttering a cry of despair or frustration, although it has to be said that it looks more endearing than malevolent. Some of that may be due to restoration, but the creature does not look anything like so sinister as many others I have seen, particularly in paintings of St. John on East Anglian screens. A change in sensibilities since the Middle Ages is probably also operating - the whole painting has an slight but inescapable cartoonish air. [Extract from the website below] 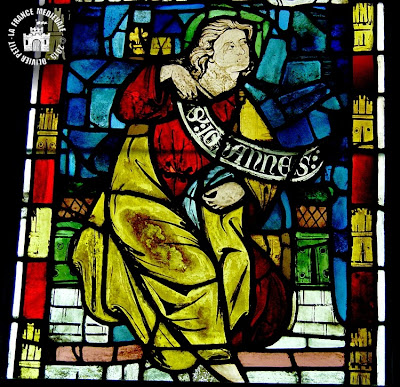 A fourteenth-century panel from a glass window from the château of Rouen now in the Musée National du Moyen Age (Musée de Cluny) in Paris
:
http://tinyurl.com/p53x8yf St John as depicted by Cimabue in an early fourteenth-century Deesis mosaic from between 1301 and 1303) in the cattedrale metropolitana primaziale di Santa Maria Assunta in Pisa: St John depicted by Simone Martini in a panel painting from between 1330 and 1339 in the Barber Institute of Fine Arts in Birmingham
http://www.wga.hu/art/s/simone/7last/5evangel.jpg

Taddeo Gaddi produced these two panel paintings from between 1348 and 1353, and now in the Collezione Vittorio Cini in Venice. :
St John being taken up to Heaven

St John in a later fourteenth-century vault fresco in the baptistery of Parma: 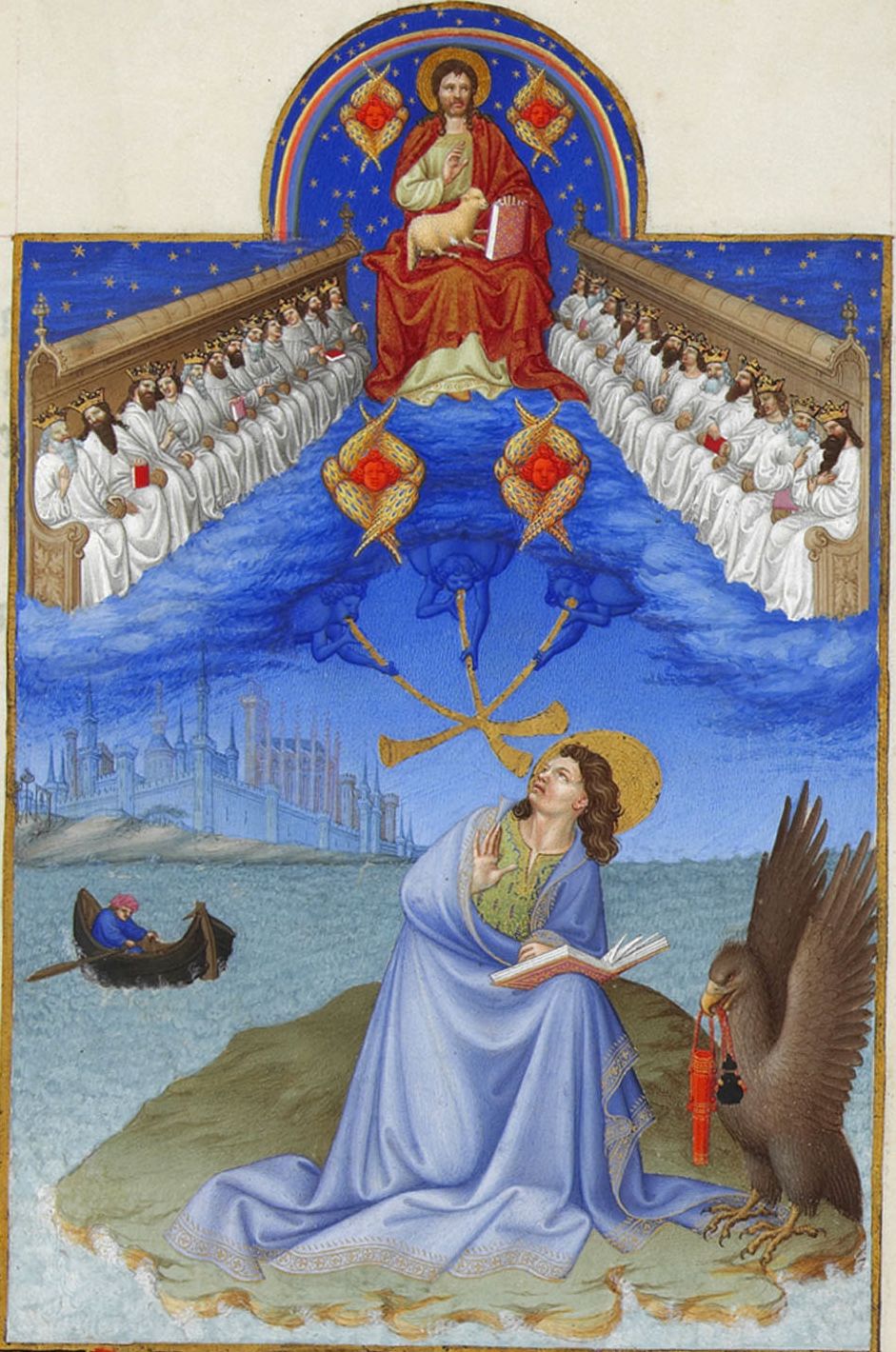 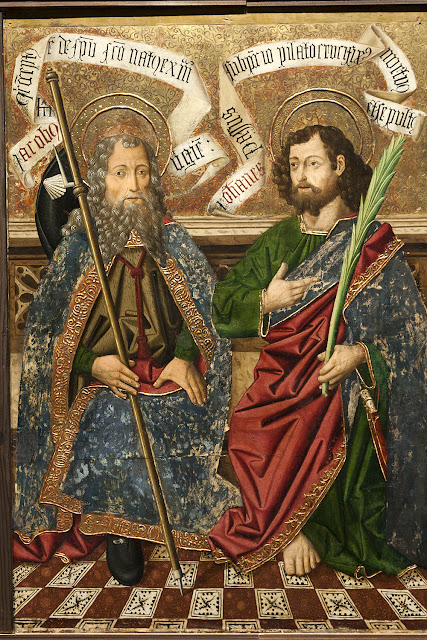 St John on the right, and on the left his brother St. James the Great, by Miguel Ximénez and workshop in a panel of his and Martín Bernad's late fifteenth-century altarpiece of the Holy Cross completed in,1487 for the parish church of Blesa (Teruel) and now, after dismemberment, mostly in the Museo de Zaragoza
http://tinyurl.com/p7zwu8d

St John portrayed by Tilman Riemenschneider in a limewood statue of 1490-1492 from the predella of the high altar of the St. Magdalenenkirche in Münnerstadt) and now in the Bode-Museum in Berlin
http://tinyurl.com/277uhu
A close-up: 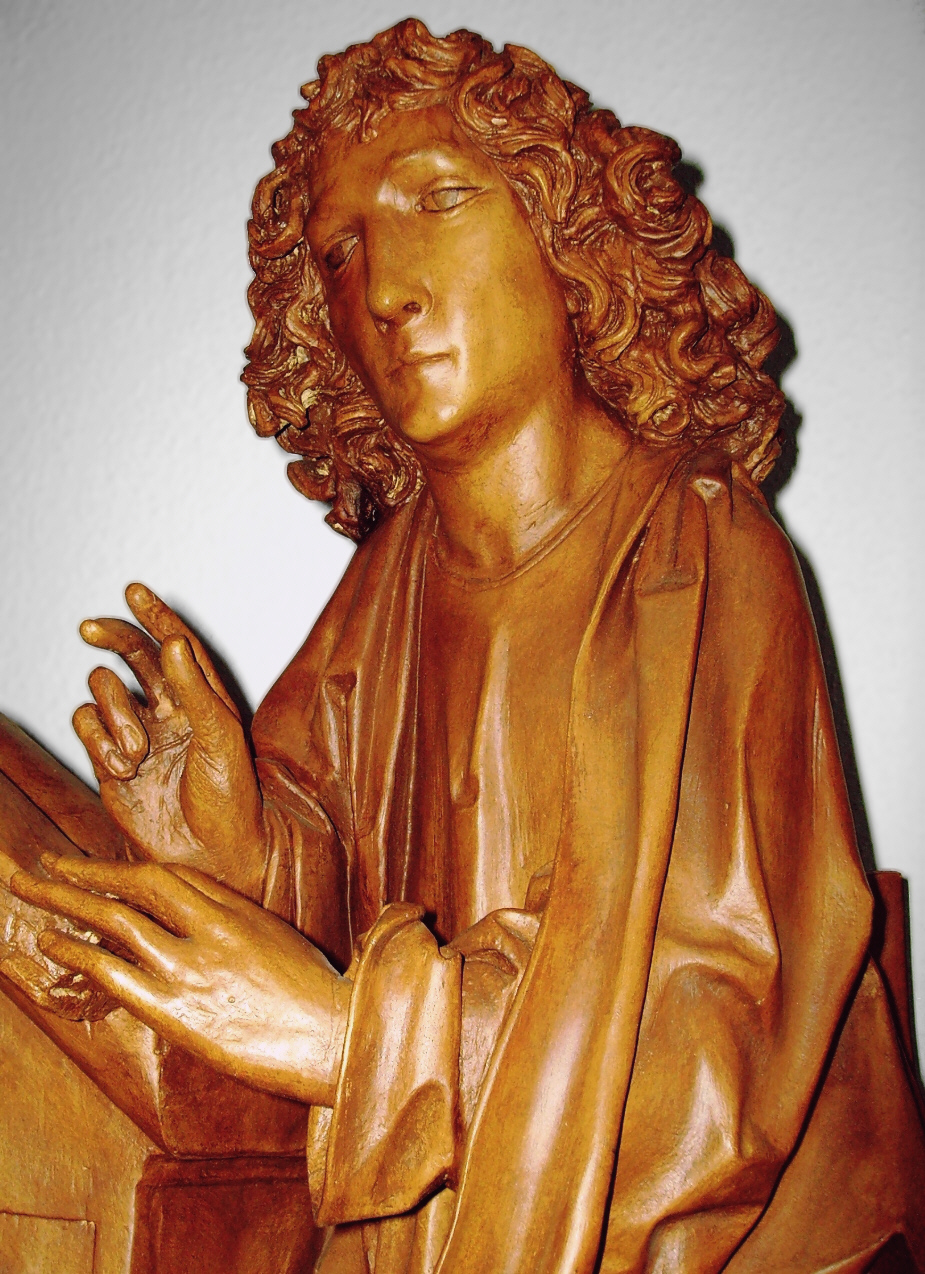