Despite his importance as the first Christian martyr St Stephen is not the patron of many cathedrals or other great churches. Amongst those which are under his patronage, apart from Vienna and the abbey at Caen - and the onetime chapel of the royal palace at Westminster - probably the most famous is Bourges, the seat of an archbishopric, and often described as one of the finest of all French cathedrals - it suffered less during the Wars of Religion and the French revolution than others. There is an illustrated online introduction to the cathedral here.

Not surprisingly one of the western portals depicts the story of the patron saint: 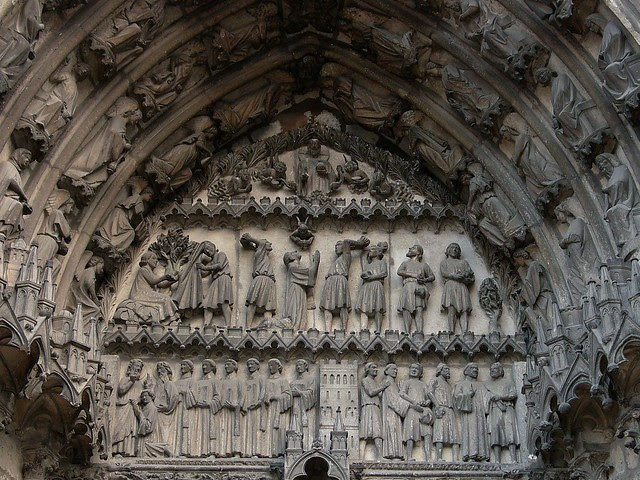 The typanum reads from bottom left - the ordination of the first seven deacons, then, I assume, to the right Stephen's dispute with the Jews. In the middle register he is stoned, whilst Saul looks after the garments of the killers on the left, and Stephen's soul taken up to God in the top

Inside the cathedral his martyrdom is depicted in medieval stained glass in the ambulatory. The window is partly medieval, partly nineteenth century restoration, as is explained in this schematic account of the window as whole, with hyperlinks to views of the panels.

Here are the two medieval panels showing the stoning and martyrdom: