Coronation of Emperor Pedro I of Brazil 1822

Today is the 190th anniversary of the coronation of Dom Pedro I, the first Emperor of Brazil, in 1822. 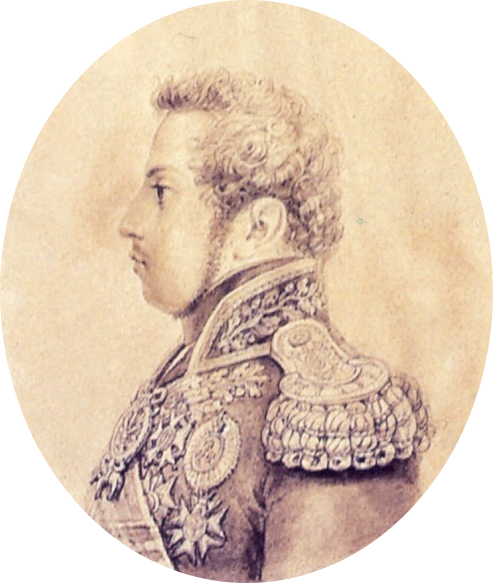 The Emperor, born in 1798, and the son of King Joao VI of Portugal, was in many ways the architect of Brazilian indepedence, and is still hailed as such. As Regent he had proclaimed Brazil's independence on September 7th 1822, and was acclaimed Emperor on October 12th. In 1826 he was also King Pedro IV of Portugal from March to May in succession to his father before abdicating the throne in favour of his daughter Queen Maria II. In 1831 he abdicated as Emperor in favour of his son Pedro II so as to invade Portugal on behalf of his daughter whose position, and that of the liberal constitionalists was being disputed by Pedro's younger, more traditionalist, brother as King Miguel I. Having secured his daughter's rights he used the title Duke of Braganza, and died in 1834.

There is an illustrated online biography of the Emperor and his remarkable career here.

The crown used for his coronation was made quickly and in 1841 replaced with a new one for the coronation of Emperor Pedro II, as detailed here.

The fact of their being a Brazilian coronation is in itself interesting. The parent monarchy in Portugal had abandoned the ceremony with the accession of King Joao IV in the successful revolt for independence against King Philip III ( IV of Spain ) in 1640. King Joao had then proclaimed the Virgin Mary as Queen of Portugal.

The coronations of both the reigning Emperors of Brazil, and indeed the fact that the present Portuguese crown was made in Rio de Janeiro during the long residence of King Joao VI there as an exile from the Peninsular War, points perhaps to a romantic revival in such ceremonial and an appreciation of its value in the early nineteenth century.