Were today not Sunday it would be the feast of St Osmund, Bishop of Salisbury, who died in 1099, but was only canonised in 1457 - the last pre-reformation recognition of sanctity for an English saint. There is an online life of him here.

The cathedral he knew at Old Sarum was replaced in the thirteenth century by the present Salisbury cathedral, and it was there that his bones were enshrined, and to that building that my thoughts turn. Or rather to some of its features which were destroyed in the eighteenth century. Regular readers of this blog will be aware of my revulsion at the destruction of historic and beautiful buildings and monuments, and here is another example of what shocks me.

At the end of the 1780s the Chapter of Salisbury called in as their architect James Wyatt. Now as an exponent of Neo-Classicism he was fine - witness the library at Oriel built in 1788. Let loose on a medieval cathedral he was lethal. Durham, Hereford and Salisbury bear witness to his ravages. If at Hereford he had in part the excuse of the collapse of the west tower in 1786, and at Durham his schemes were stopped short of destroying the Galilee Chapel, at Salisbury there seems to be neither excuse nor restraint.

Demolishing two later Hungerford and Beauchamp chantry chapels of 1464 and 1481 which flanked the Trinity Chapel at the east end can, I suppose, be explained, but not excused, as restoring the original configuration of the eastern chapels. There is an interesting, illustrated article about the history and development of this part of the cathedral here.

The same idea of restoring to its primitive simplicity (now where else have I heard that dangerous idea in connection with the Church...?) may have applied to removing the porch to the north transept. Ruthlessly pulling down the choir screen and rearranging the medieval tombs in tidy lines in the nave was bad. His worst action was destroying the detached bell tower.

It had been built in 1265, soon after the completion of the cathedral, and before the central tower and spire were raised. In style it was about the same period as the chapter house and cloisters. The plan was square, although one writer, frequently quoted, calls it multangular. The stone tower comprised two massive stories with lancet windows in the lower, and windows with plate tracery above, with a spire apparently of wood crowning the whole. Leland in the mid sixteenth century speaks of it as "a notable and strong square tower for great belles, and a pyramis on it, in the cemiterie."

When the cathedral was visited in 1553 by the Royal Commission there remained a peal of ten bells, and the re-casting in 1680 of the seventh and eighth by the Purdues, local founders, is recorded among the muniments. The sixth is now the clock bell of the cathedral, but the fate of the others is absolutely unknown.

It was evidently massive enough to have stood for centuries, and the single pillar of Purbeck marble, "lying in its natural bed," which was the central support that carried the bells, the belfry, and the spire, is specially mentioned by the architect Price as perfectly sound, but he owned that the leaden spire, and a wooden upper story, were decayed, and put forward a design of a sham classic dome which he hoped might be erected in its place.

Salisbury Cathedral with its bell tower by Wenceslas Hollar 1671


A larger version of this engraving can be found here. 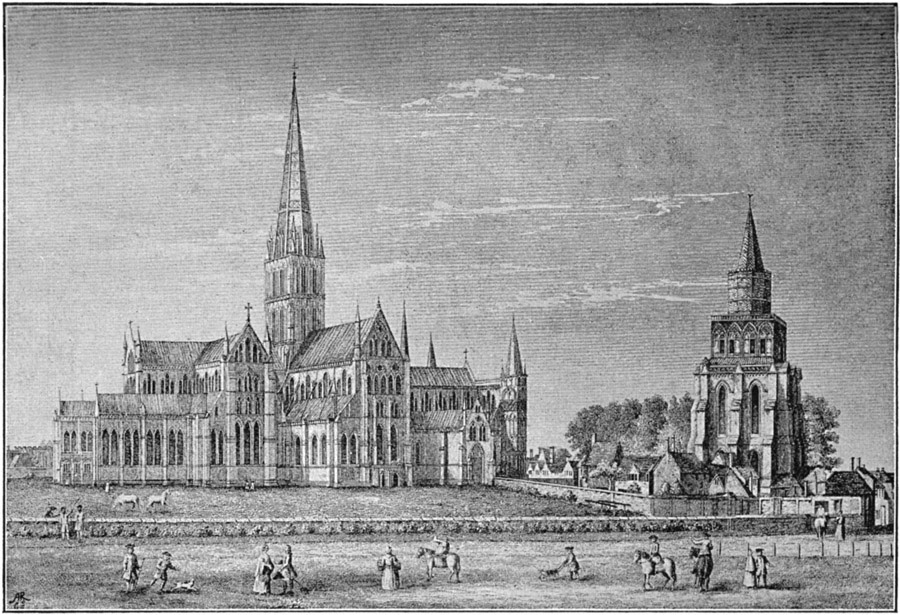 The Bell Tower, a striking feature of the close, and indeed the city, as it was before 1789, is shown above in the facsimile of an engraving originally published in 1761.This shows the campanile standing at the north-west corner of the enclosure.

By 1768 the timber upper stage and spire had been removed, leaving the stone base, as here:

The bell tower in 1768 by Francis Grose

Despite its antiquity it was demolished as superfluous in 1790, and the churchyard levelled in 1789-90. Apart from pictures all that survives is the clock, now working in the nave, and which may be as early as 1386. In a dry summer, as in 1972, one can detect a crop mark in the grass where it stood.

Not only was this historic feature lost, but Salisbury also lost the ability to have bells - along with Ely and Norwich amongst Anglican cathedrals it is devoid of a peal.

Now if I were Dean of Salisbury I would start a campaign to rebuild the bell tower - the design could easily be reconstructed from the drawings and excavation of the site - and acquire some bells. But then, I'm not Dean of Salisbury.

Beautiful banner at your site as well, I am reminded of some wall paintings by the Mexican artist, Diego Rivera, such as this one http://EN.WahooArt.com/A55A04/w.nsf/OPRA/BRUE-8BWNY4. You browse more murals of his at wahooart.com.

please send details if you start one or you come across a scheme for a new bell tower at salisbury cathedral.
luckily for me,when i lived in salisbury (1960's) most of the local church bells still rang everyday,not silenced by those bloody killjoy outies.
the city no longer sounds right when i visit ans new cathedral bell tower would help returns things to normal.
it did'nt feel right if you did not hear a bell tolling a goodbye to someone every few days.
i will only be intered at a chuchyard that rings a toll to me.

And what of Our Lady's Well in the lee of the bell tower please?