Our Lady of Coventry

The devotion to Our Lady of Coventry appears to originate with the foundation of the Benedictine monastery there by Earl Leofric and his wife Godgifu in 1022. In 1034 this was dedicated to St Mary, St Peter, St Osburh and All Saints. St Osburh ( Osburga ) is a saint of whom little is known but she appears to have been abbess of a community of nuns in the period before the Viking invasions. There is an account of what is known of her from Wikipedia at Osburh of Coventry. Her shrine appears to have been in the south transept of the Benedictine church, but even in the Middle Ages little was remembered about her: in 1539 her copper and gold head reliquary was thought to be that of a male saint.
At her death, which occurred during the reign of the Conqueror, Godgifu left a rich chaplet of precious gems valued at 100 marks of silver - £66.13.4 - to be hung around the neck of the statue of Our Lady. This image has been used in the modern replacement on the site of the cathedral. The Wikipedia life of Godgifu can be read at Lady Godiva
In 1102 the monastery became the cathedral of the diocese - the Bishop having moved it from Lichfield to Chester in 1095, and, following the re-establishment of a cathedral at Lichfield eventually the diocese became Coventry and Lichfield, each city having a cathedral. Both were dedicated to the Virgin Mary and as such were centres of devotion to her.
The cathedral in Coventry was in the centre of the city with the two parish churches immediately to its south - Holy Trinity to the west, St Michael’s to the east. The latter became the cathedral of a new diocese of Coventry in 1918 and was tragically lost in the Coventry blitz of 1940.
The fascinating fifteenth century St Mary’s Guildhall adjacent to St Michael’s is a reminder of the Virgin’s patronage of civic life in what was one of the leading cities of later medieval England. However apart from that there appears little recorded about a specific local Marian cult in Coventry.
With the dissolution of the cathedral priory in 1539, the fact that the city had two very fine and sizeable parish churches and that there was another cathedral at Lichfield meant that despite the efforts of the Bishop and the hopes of the city council it could not be saved and beginning in anout 1545 the process of demolition began. The base of the north west tower survives incorporated into the old Bluecoats School.
Wikipedia has a good summary of the history and what is known of the architecture of the cathedral at St Mary's Priory and Cathedral
There is a video about the not inconsiderable surviving remains of medieval Coventry and identifying the site of St Mary’s cathedral which, despite its occasionally flippant style, had some excellent views and information which can be seen at Video: Coventry’s Missing Cathedral
Excavations in the nineteenth century and for the post war cathedral revealed more of the west end and of the east end, and more extensive work in 1999 and 2001 led to the nave and cloister being exposed and presented as a public space.
As part of this the Catholic Churches of Coventry commissioned a bronze statue of Our Lady of Coventry from Mother Concordia Scott and this is now in the remains of the nave. There is  an article about it at Madonna with Godiva link stays; PERMANENT HOME FOUND FOR REPLICA BOUGHT BY CATHOLIC CHURCHES 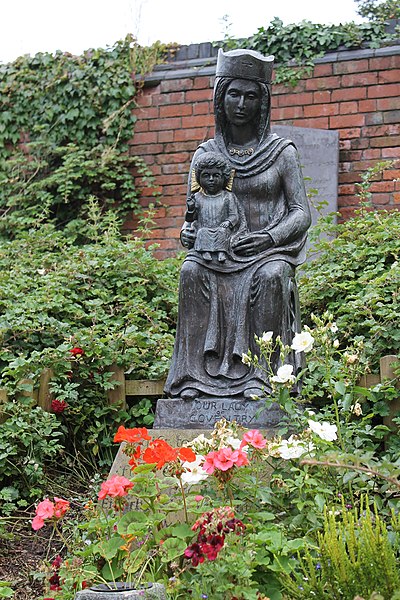 Most interesting blog. I remember your talks in Pontefract many years ago.

Great to hear from you. Do keep in contact. I hope all is well with you.