Our Lady of Windsor

The Marian spiritual pilgrimage has now reached Windsor and St George’s Chapel, which possessed the the-cross-gneth, believed to be a relic of the True Cross given by King Edward III, from 1416 a major relic of its principal patron St George and also the relics of the Buckinghamshire priest John_Schorne

Edmund Waterton records in his Pietas Mariana several images of the Virgin Mary at St George’s in Windsor.

The first was the little image of Our Lady. In the inventory of the Treasury taken in the eighth year of King Richard II, 1384-85, Sir Walter Almaly being then the custos, it was in need of some repairs, as there were enumerated four lilies which are wanting in the crown of the little image of the Blessed Virgin Mary. There were also three crowns of silver gilt, adorned with divers precious stones, one of which was for Our Lady, another for her Son, and the third for St. Edward. Presumably the royal saint was kneeling in a tableau with the Virgin and Child. Five stones were wanting in the crown of Our Lady, and a flower of delicate workmanship in that of Our Lord.

King Henry IV gave another image of the Virgin and Child to the chapel: this was made of silver and gilt with Our Lady holding the Christ Child, who was shown playing with a bird, in her right arm. In 1427-28 in the minority of King Henry VI this was repaired or replaced - the records appear slightly contradictory - using 20 pounds 31ounces of silver by a goldsmith recorded as Conus Melver.

This may have been similar to the type of expensive Court art devotional image which has occasionally survived on the continent, or perhaps to the elaborate and delightful pieces of gold with jewels and enamel decoration which were certainly a speciality of Parisian goldsmiths in the first decade or so of the fifteenth century. 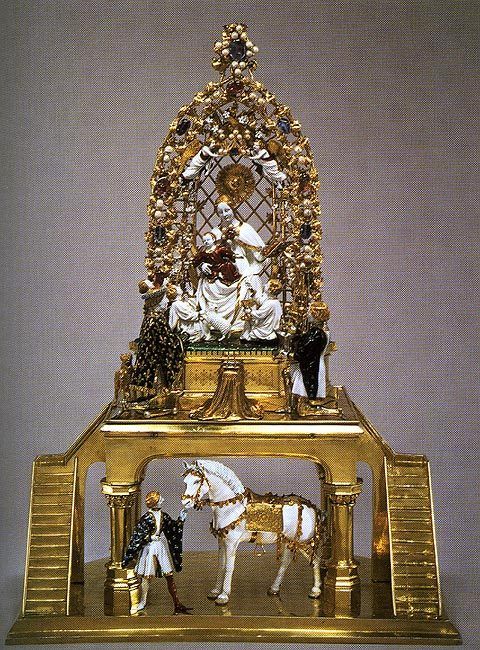 'The Goldenes Rössl' was a New Years gift in 1405 from King Henry VI’s grandmother, Queen Isabeau of Bavaria to her husband King Charles VI of France. This beautiful piece is on display in the Schatzkammer und Wallfahrtsmuseum in Altötting, Bavaria, Germany
Image: Pinterest

The building for which these images were provided was replaced by King Edward Iva from the 1470s onwards by the much larger St George’s Chapel we see today and which was completed under King Henry VIII in 1528.

On the site of the previous chapel, and retaining the thirteenth century doorways of its predecessor King Henry VII built what looks like an intended Lady Chapel which would have housed such images. The King may have planned to be buried in it rather than at Westminster - his eponymous chapel there may have been intended as a shrine chapel for a still not yet canonised St Henry VI.

Wolsey was given the chapel as a proposed burial place by King Henry VIII, who then took over the unfinished tomb, when the Cardinal fell from power, for himself. That project was never completed either: its fate is discussed in the late Jennifer Loach’s article in Past and Present 1994 ‘The Function of Ceremonial in the Reign of Henry VIII’. The King remains buried in the vault under the choir. The metal work was stripped away in the Civil War in 1642 or 1643 and the sarcophagus eventually ended up holding the body of Nelson in St Paul’s Cathedral. The empty chapel survived a plan to replace it with a mausoleum for King Charles the Martyr proposed in the time of his son King Charles II. King George III created a new royal vault under the chapel and it was Queen Victoria who decorated it in a lavish style as the Albert Memorial Chapel from the 1860s. I suspect it is, unfortunately, not always appreciated by visitors if they see it at all, dismissing it until recently as merely Victorian and as they cannot usually enter it, not seeing it as really part of St George’s.

In the ambulatory between the main chapel and this eastern chapel, and near the Cross Gneth, there appears to have been the image of “Our Lady behind the high altar” This is mentioned by John Foxe in The Book of Martyrs. Writing of one Robert Testwood, a chorister in St George’s Chapel at Windsor, he says:

"It chanced Testwood one day to walk in the church, at afternoon, and to behold the pilgrims, especially of Devonshire and Cornwall, how they came by plumps, with candles and images of wax in their hands, to offer to good King Henry of Windsor. [King Henry VI was reinterred in the main chapel and there was a considerable devotion to him supported by King Henry VII]." Testwood spoke to a group of them against pilgrimage, &c. "Then he went further and found another sort licking and kissing a White Lady made of alabaster, which image was mortised in a wall behind the high altar, and bordered about with a pretty border, which was made like branches, with hanging apples and flowers. And when he saw them so superstitiously use the image as to wipe their hands upon it, and then to stroke them over their eyes and faces, as though there had been great virtue in touching the picture, he up with his hand, in which he had a key, and smote down a piece of the border about the image, and with the glance of the stroke chanced to break off the image’s nose. “Lo, good people !” quoth he, “you see what it is nothing but earth and dust, and cannot help itself; and how then will it help you? For God s sake, brethren, be no more deceived.” And so he gat him home to his house, for the rumour was so great, that many came to see the image how it was defaced."

Edmund Waterton adds at this point the following comment “this sacrilegious wretch lost his life under Henry the Eighth, for denying the Real Presence”

Testwood was indeed to be one of the three Windsor_Martyrs of 1543. There is a biography of him him at Robert_Testwood

Our Lady of Windsor, pray for us