Today is the centenary of the death of the Empreror Francis Joseph in 1916. He died a few days short of the 68th anniversary of his accession, and his was the third longest reign of a European monarch to date.

His reign and era is often remembered or presented as period of stability, but was frequently one of political turmoil - the crisis of 1848-9 which brought the young Archduke to the Imperial throne in the stead of his uncle the Emperor Ferdinand, the conflicts over Italian unification with both Savoy and France in 1858-9, the war with Prussia and the loss of Venice in 1866 and the negotiation of the compromise with the Hungarians in 1867, as well as the failure of his brother to estanblish his own rule in Mexico and the summer crisis of 1914 that led to the First World War.

Moreover it was a reign marked by terrible personal tragedies for the Emperor and the Imperial family - notably the deaths of the Emperor Maximilian, of Crown Prince Rudolf, of the Empress Elisabeth and finally of the Archduke Franz Ferdinand and his wife at Sarajevo. The Emperor's response to news of his wife's murder in 1898 was " Am I to be spared nothing?" and such it must often have seemed to him.

He also displayed remarkable resiliance and a strong sense of duty to his people and inheritance as Emperor-King of Austria- Hungary, and enjoyed the devotion of the mass of his people.

A while ago I read the biography of the Emperor Twilight of the Habsburgs: The Life and times of Emperor Francis Joseph  by Alan Palmer - an Orielensis and noted writer of accessible accounts of nineteenth and early twentieth century figures - and what emerged was Francis Joseph's dry sense of humour. He is often presented as a rather arid, duty-obsessed figure in contrast to his beautiful and beguiling wife or his flamboyant son, but what Palmer brings out is a very Habsburg sense of the comic aspects of public life that is often missed in other accounts, or when presented in print can look cold or intimidating. In this book one senses the twinkle in the Imperial eye. 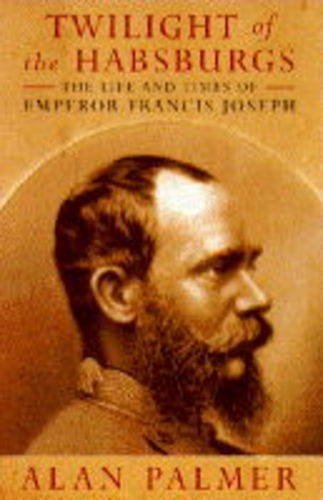 The Arms of the Austrian Empire and Kingdom of Hungary