The Special Correspondent has sent me the following link on the so-called Catskin Earls. The article can be accessed at http://messybeast.com/catskin-earls.htm but for the ease of readers I have also copied and pasted it below:

The Earls of Derby, Shrewsbury and Huntingdon, peerages created before the 17th century, were termed "catskin" earls. This led to the popular belief, in later centuries, that they wore cat pelts instead of ermine as trim on their robes. While cat skins were used in the Middle Ages, they were considered a humble fur compared to expensive and luxurious ermine and beaver (beavers existed in Britain until the 16th century). So where did the term come from?

Catskin was most likely a corruption of the Middle Ages Franco-English "quatre-skin" which meant four skins. This referred to the four rows of ermine skins on the robes of earl of that period. From the 17th century, earls were restricted to three rows of ermine, while dukes were permitted four rows. The "catskin" earldoms, with their fourth row being a visible symbol of their antiquity, are the only surviving earldoms that were created prior to the 17th century.

In 1902, The New York Times suggested that cat-skin referred to the pelts of white domestic cats. This was based on the idea that British wild cats are tabby, and that ermine (winter stoat) was restricted to Scotland and North European regions. Ermine, also refers to a pattern that was painted onto other furs, such as rabbit, although such fakery would have been frowned upon at that time. Contemporary paintings of noble personages in ceremonial robes supports the "quatre skins" derivation.

AMONG the points which the Duke of Norfolk, as Earl Marshal, might have had to decide in view of King Edward's coronation, one of the most curious is as to the right of three Earls of England to wear catskin instead of ermine on their robes. As nobody but the furriers is at all likely to have disputed this right, the claim has probably not come to trial. The three Earls are those of Shrewsbury, created in 1442; Derby, 1455, and Huntingdon, 1529. The custom which distinguishes the holders of these three titles is, of course, an outward and visible assertion of superiority, not a tradition either of humility or of parsimony. My Lords of Shrewsbury, Derby, and Huntingdon do not thereby value themselves, as compared to other peers in the direct ratio of catskin to ermine, but rather in the inverse.

There were Earls in England long before there was any ermine, and those early Earls trimmed themselves with the skins of cats. As no kind of wildcat indigenous to Britain, or any parts of Europe then accessible to English traders ever had white fur, the Earls before the time of Henry VIII — in whose reign the Huntingdon creation originated — must have used domestic cats. An Earl skinning the cats of his vicinage to make him a fur tippet is not a dignified picture from the life of the Middle Ages, but even now, when cats are so much more plentiful, most of those on the back fences are black or tabby, not white, and are, therefore, ineligible for the adornment of any Earl. As time went on, Earls became, like the dignitaries referred to in Gilbert’s "Gondoliers"

“For Bishops, in their shovel hats
Were plentiful as tabby cats,
And Dukes were three a penny.”

The Dukes began to be created just after the date of the Huntingdon peerage, the only Duke antedating that being he of Norfolk, who ought on that account, if not for his ancient earldoms of Surrey and Arundel, to have a catskin, but has not. Just about that time, too, the Marquises and Viscounts came in, the former having a great run in the Tudor period. The truth at the bottom of the ”catskin earldoms” is that these three are nearly all the nobiliary titles in England (not Scotland or Ireland) that can claim an origin older than the Reformation. Before that period the English House of Lords, with the exception of royal Princes, was made up of Earls and Barons, and the latter, as they were not then allowed any coronets, probably had no right to any skins of beasts. 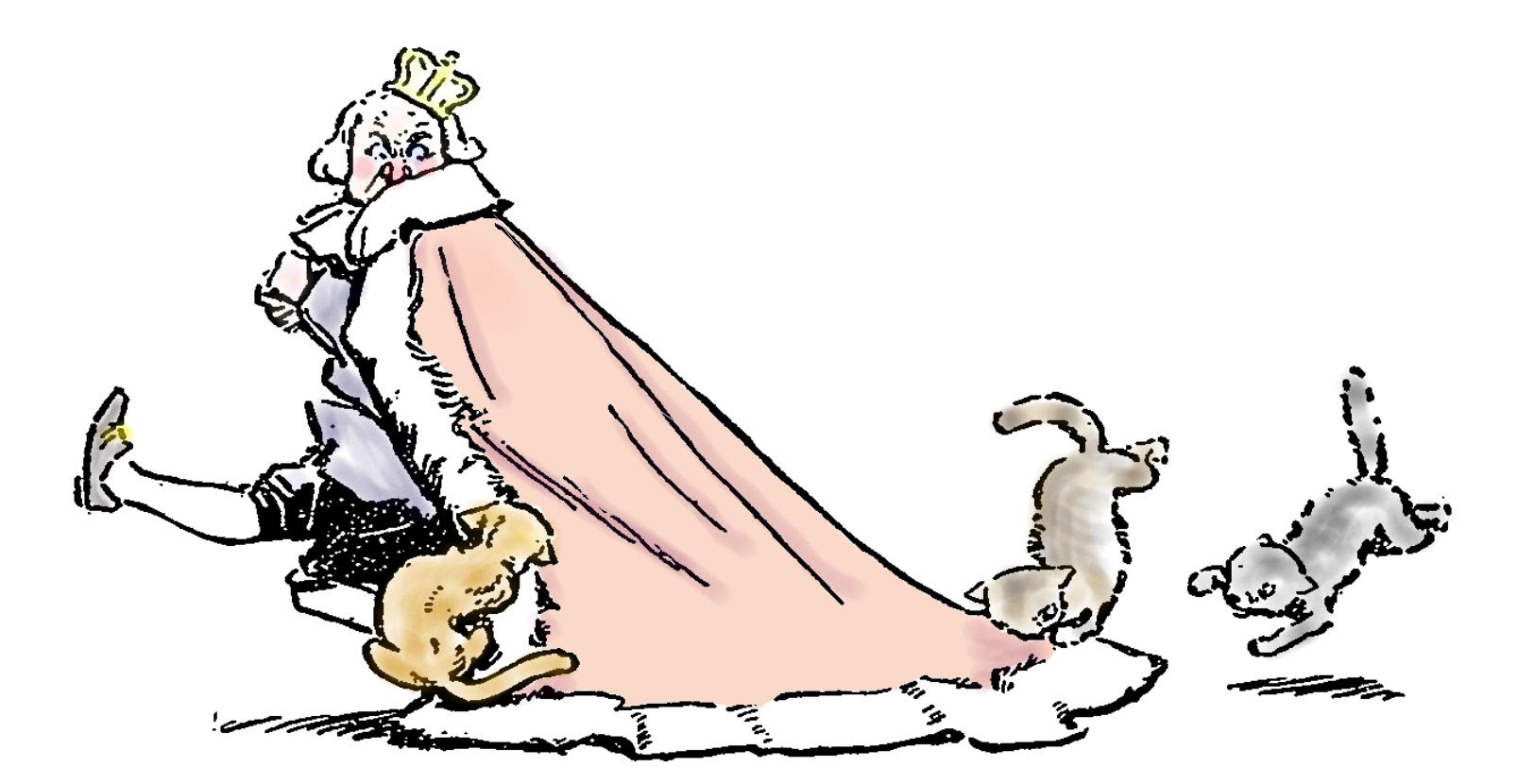 While the New York Times alluded to the possibility using domestic cats' pelts, other newspaper reports, such as The Washington Post (21 May, 1921) attempted to correct the popular misconception that cat-skins were used in lieu of ermine. Personally, I'm sure that no earl of the time would have condescended to wear common cat fur on his ceremonial robes, though his more impoverished 20th century descendants (title does not equate to wealth in the British aristocracy) may well have considered dyed rabbit skins.


The Clever Boy will just add that the later medieval House of Lords had a clerical majority, made up of the two Archbishops, the diocesan Bishops, the Parliamentary Abbots, the Prior of Coventry cathedral priory and the Master of the Knights Hospitaller, all with appropriate robes.

Royal Dukes have five rows of ermine, Dukes four, Marquesses three and a half ( they are something of an interpelation into the ranks of the nobility and date from the time of King Richard II, and the title was only infrequently bestowed before the eighteenth century ), Earls three and Viscounts and Barons ( and modern Life Peers ) two rows of ermine on their Parliamentary robes.