Today is the 225th anniversary of the death of King Charles III of Spain, who had previously been Duke of Parma and then the first Bourbon King of Naples and Sicily. There is a good online life of the King here. 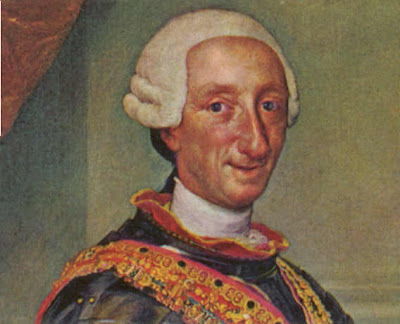 As that biography makes clear as a ruler he embodied many of the best ideals of late eighteenth century European monarchy. Often described as the Enlightened Despots I would favour a term something more like pragmatic reforming monarchs - only perhaps the Empress Catherine II was an actual despot and she was, coincidentally, probably the one who most completeely took on the ideals of the Enlightenment - and was one of the less succesful in terms of actual a chievements in that field.

King Charles was perhaps unlucky in that theevents in Spain under his son King Charles IV and the French invasion led to the country slipping further out of the European mainstream and to the loss of virtually all of its overseas Empire before the death of his grandson King Ferdinand VII in 1833. Nonetheless he is still remembered as a conscientous ruler who sought pratical improvements in this capital - he was nicknamed the Mayor of Madrid - and his country.