Today's feast marks the quartercentenary tomorrow of the martyrdom of Bl George Napier at Oxford castle.* Martyrdom in defence of Papal claims on the feast of the dedication of the Lateran basilica seems appropriate.

I have adapted the entry from the online version of the Catholic Encyclopedia: George Napier (or Napper) was born at Holywell manor, Oxford, in 1550 and executed at Oxford caste on 9 November 1610. He was a son of Edward Napper (who died in 1558), sometime fellow of All Souls College, and his second wife Anne, the daughter of John Peto, of Chesterton in Warwickshire, and niece of William, Cardinal Peto. 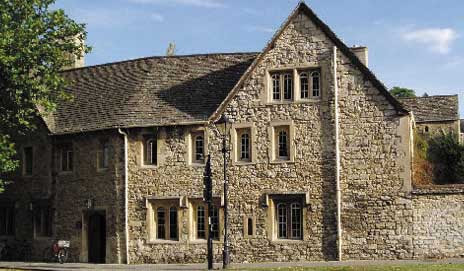 He entered Corpus Christi College 5 January 1565-6, but was ejected in 1568 as a recusant. On 24 August 1579, he paid a visit to the English College at Rheims, and by December 1580, he had been imprisoned. He was still in the Wood Street Counter, London, on 30 September, 1588; but was liberated in June 1589, on acknowledging the royal supremacy. He entered the English College at Douai, in 1596, and was sent on the mission in 1603. He appears to have lived with his brother William at Holywell.

He was arrested at Kirtlington, four miles from Woodstock, very early in the morning of 19 July 1610, when he had on him a pyx containing two consecrated Hosts as well as a small reliquary. Brought before Sir Francis Eure at Upper Heyford (Wood says before a justice named Chamberlain), he was strictly searched; but the constable found nothing but his breviary, his holy oils, and a needle case with thread and thimble. The next day he was sent to Oxford Castle, and indicted at the session soon after under the act of 27 Eliz., c. 2 for being a priest. The possession of the oils was held to be conclusive and he was condemned, but reprieved.

Whilst in prison he reconciled a condemned felon named Falkner, and this was held to aggravate his crime, but as late as 2 November it was believed that he would have his sentence commuted to one of banishment. As he refused the oath of allegiance, which described the papal deposing power as a "false, damnable, and heretical" doctrine, it was decided to execute him. He suffered between one and two in the afternoon, having said Mass that morning.Bishop Challoner gives an account of his last words and prayers. 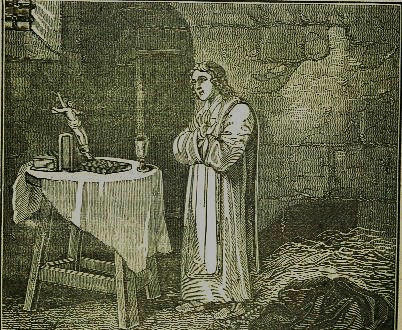 Bl. George Napier saying Mass in his cell in Oxford Castle on the day of his execution.

From Bishop Richard Challoner Lives of the Missionary Priests. 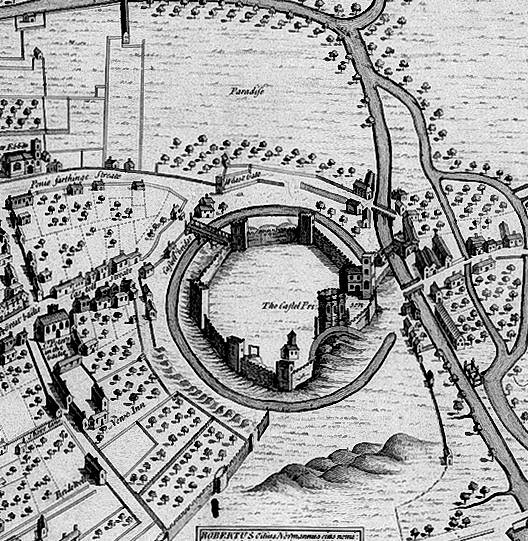 A detail of Ralph Agas' map of Oxford, made in 1578, showing Oxford Castle. Inside the walls you can see the gallows where Bl. George Napier was executed. St George's tower on the extreme right is still standing, as is the motte, on which in 1610 there was still the castle keep.

Bl. Ggeorge's head was, according to Anthony Wood, set up on Tom Gateway at Christ Church. Challoner's less probable statement that it was set on Christ Church steeple may well be a refernce to tha fact that by his time Tom Tower had been erected in 1682 as the cathedral bell tower. His quarters were placed on the four city gates, but at least some were secretly removed, and buried in the chapel (now a barn) of Sandford manor, formerly a preceptory of the Knights Templar.

Thank you for this. Sad that the English seem now to lack such conviction and courage.

Another great martyr and a good post. I have also covered Bl George Napier (or Nappier as I have it) on http://linenonthehedgerow.blogspot.com