Ninety years ago today there occurred the death of the Empress Carlota of Mexico. Born on June 7 1840 Princess Charlotte ( Marie Charlotte Amélie Augustine Victoire Clémentine Léopoldine ) of Belgium she married Archduke Maximilian of Austria, in preference to King Pedro V of Portugal, and when Maximilian accepted the proffer of being Emperor of Mexico in 1864 she became the Empress Carlota.

Their story as rulers of Mexico and its terrible end - a firing squad for Maximilian and insanity for Carlota is well known. There is a biography of her at Carlota of Mexico and at The Mexican Adventure: Empress Carlota of Mexico. That raises the point about the varying state of her mental health in that long widowhood. At its beginning she said she would waut for her husband for sixty years, and more or less she did.

At her death at Meise as the Mad Monarchist pointed out in a blog post her coffin was escorted to burial at Laeken by the few elderly survivors of the Belgian Legion, the Empress Carlota Guards, who had fought for her in Mexico. 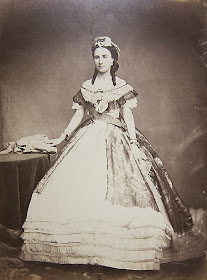 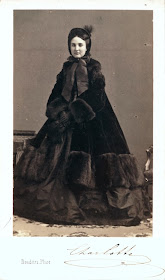 That was in 1927 and the events of 1867 must have seemed very remote then to almost everyone except the widowed Empress and her few faithful followers.

However it is worth pointing out that the Empress is not quite as remote a figure as might at first be thought. She was remembered by her great-neice, the late Queen Marie-Jose of Italy, who died in 2001 - and lived at one time in exile in Mexico - as can be read at Marie Jose of Belgium On Her Great-Aunt Empress Carlota of Mexico

When the Empress died it was in the lifetime of her first cousin four times removed, who had been born the previous year, and is now Queen Elizabeth II, and the Empress' great great great nephew is the present King of the Belgians.