The beheading of Thomas of Lancaster in 1322

This year I have found another nearly contemporary depiction of his death. It is from Villani's Cronica Nuova and must date from only a generation or so after the event. As such it indicates interest in English political events in Florence at the time - but the downfall of Earl Thomas would have been a major news story given his prominence in English life and his family connections to both the English and French royal houses.

Unfortunately the photograph is in black and white rather than colour. The miniature is in no way, both in its Florentine provenence and its detail, an eye- witness record. King Edward II can be seen observing the execution of his cousin from within Pontefract castle - in reality the execution took place almost a mile away on what became known as St Thomas' Hill and became a place of pilgrimage as the cult of St Thomas of Pontefract developed in the following years. Nonetheless this is an interesting depiction of an event that clearly attracted wide attention in what happened to become my home town. 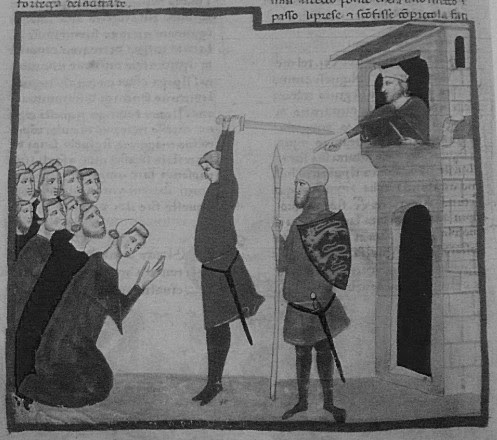