Last Tuesday evening I attended another of the public meetings organised by the Fellowship of St Alban and St Sergius and held at Pusey House to hear Metropolitan Kallistos of Diokleia deliver the Nicholas Zhernov Memorial Lecture about the continuing Catholic - Orthodox dialogue under the title "Orthodox and Catholic Relations: Then and Now." There is a biography of the Metropolitan here, and a bibliography of his numerous writings here. 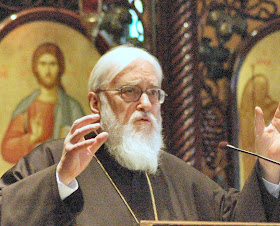 I have heard the Metropolitan speak previously and he is always exceptionally good value as a speaker. He is has been a member of the joint commission since 2007 and is also Co-Chairman of the Anglican-Orthodox commission.

Just over fifty years ago, on January 5th 1964, Pope Paul VI and Ecumenical Patriarch Athenagoras met in Jerusalem, the first such meeting since the Council of Florence in 1438-9.

Image:scnu.edu.cn
At that time there was great optimism as to the possibilities for ecumenism. On December 7th 1965 there was by Pope and Patriarch a mutual revocation of the anathemas issued by their predecessors in  1054  - a striking symbolic gesture.

This year  from  May 24th-26th Pope Francis and Patriarch Bartholomew will mark the anniversary by meeting in Jerusalem. What will follow in term sof the official dialogue which has been pursued since 1980 is not yet clear The Council of Florence
Emperor John VIII and the Ecumenical Patriarch Joseph II face Pope Eugenius IV, with delegates of East and West sitting between them

Image:syropoulos.co.uk
In the 21st century there are different perspectives, and the crucial point of discussion is the Papal position in the Church - as Patriarch Bartholomew has said the two communions have a different ecclesiology

The dialogue since 1980 did not look at the Papal role first - it would not have been fruitful to do so. Instead there were three conferences producing papers on Christ, the Eucharist and Ministry. There has also been discussion of the place of the Eastern rite Catholic Churches.

Only since after 2007 and the Ravenna agreement have discussions moved to look at the position of the Pope. The largest Orthodox Church, that of Russa was not present at Ravenna, and that has had significant consequences. The Ravenna statement recognises three levels of primacy:
1. The local level - that of the diocesan bishop
2. Regional patriachates, metropolitans etc
3. Universal primacy of the Pope

In the Catholic tradition it is possible to view the Pope as bishop of his diocese, as a patriarchal, and as having a Universal primacy that is a mark of unity

For the Orthodox there is no problem in him being Bishop of Rome, or in possessing a regional primacy as head of the Church in the West. There are however difficulties at a Universal level.

However the fact of Primacy was accepted by both East and West, but there was not discussion of  what that actually involves, of what is the power vested in the Pope. In the past the Orthodox denied any Papal primacy, whilst accepting him as bishop and patriarch only, and indeed that the Pope is the most senior patriarch.

The Ravenna accord moved the discussion forward, and saw recognition of the fact that the Pope was different, but the absence of the Russian Church meant this was a lessthan complete acceptance.

The next question to be answered was: What was the position within the Church of the Pope in first millenium?

In  Ut Unum sint Pope John Paul II recognised that the Papacy could claim no more than what had been established as apapal power  before 1054, but also that it could claim no less.

There have been two meetings on what was the view in the first millenium at Paphos in 2009 and in Vienna in 2010. Much of the discussion was tortuous and it was not clear what could be established. The leading Orthodox theologian, Metropolitan John, expressed the view that the appeal to history would not resolve the problem - a point which worried Metropolitan Kallistos.

The discussion had moved forward on Synodality and Primacy, which is to be discussed further in September this year.

By this time a division had appeared in the Orthodox ranks, with the Moscow Patriarchate ranged  against the rest.

For the leading Orthodox theologian Metropolitan John - Primacy was of the essence of the Church, but for Metropolitan Hilarion of Russia Primacy is not of Divine origin, but is something which emerged in the practice of the churches.

Attention had been paid to Apostolic Canon 34, traditionally ascribed as agroup to the Apostles, but now dated to the late 4th century prescribes that bishop must recognise the Bishop who is first, and he, in turn, must consult with the others - there is mutuality in the relationship. Apostolic Canon 34 refers to regional primacy. The Ravenna agreement applies this to the Universal Primacy and the model stemming from Vatican II and the concept of collegiality. In contrast the Moscow Patriarchate says this only applies at the regional level. Similarly Moscow regects an analogy advanced by some of the Church to the relationships within the HolyTrinity.

Under the ideas being drafted the Pope would convoke an Ecumenical Council. This, hoewever, was not the case in the undivided early Church. All seven Councils recognised by both communions were called by the Emperor - unfortunately, as Metropolitan Kallistos said, there is currently no Emperor. No Popes attended any of these seven Councils. Today the Pope summons and presides as at Vatican I and II. Moscow says there is no precedent for this, but suggets no alternative. Most Orthodox are willing to give the Pope a specific role, but this is denied by the Russians. Mutual communion would be the measure of unity.

Why is this the Russian attituide.  Metropolitan Kallistos opined that there is a hidden agenda - the Russians  recognise the Ecumenical patriarchate in Constantinople, but are reluctant to give its occupant Primacy. When he describes himself as "First among equals " it is to use a term not liked by the Russians. As a consequence they are reluctant to concede to Rome  that which they deny Constantinople when it takes it to itself. This is not stated policy but Metropolitan Kallistos thinks it is the cause.

What the Orthodox term freedom in the Holy Spirit for the Paraclete to speak to the individual conscience is comparable to the "Sensus fidelium" in the West. The Catholic and Apostolic tradition of seven accepted Ecumenical Councils links both traditions. The Chair of Peter conveys the unique position of Rome. However many Orthodox see all bishops as successors of Peter - as St.Cyprian said in the 3rd century. Most Orthodox would, he believed, accept the unique role of the Pope. The concept of "the care of all the churches" articulated by Popes Siriacus and Innocent I, that is not a newly invented jurisdiction but concern for the total Church and it would be for the Pope to take the initiative if unity was in danger. Another phrase of importance was the Papal title of "Servus servorum Dei" first used by Pope Gregory I.

This left the question as to whether such would this do for Catholics?

Patriarch Athenagoras in 1968 spoke of unity as a necessity, as our destiny, and also that unity will be a miracle, but a miracle in history. Unity will be a gift from God, and so we should ask for it. This was the Metropolitan's conclusion.

In answer to a short series of questions he said that PopeBenedict XVI's dropping of the use of the title  Patriarch of the West, which was said to be in consequence of ambiguity as to its meaning led him to ask why it was not better to clarify rather than discard it ; the Orthodox had no problem with it, and see the Western Patriarch as historically possessing more poewer than the Eastern ones. He would like to see the title taken back into use.

During Vatican II Pope Paul VI had developed the concept of collegiality, but with Humane Vitae in 1968 appeared to go against that principle. Under both Pope John Paul II and PopeBenedict XVI there seemed little of collegiality in the Roman structures. The question is what will Pope Francis do?

The role of Roman Curia, which has taken on a life of its own would need to be examined,  and also the appointment of bishops in the 19th century most were appointed by monarchs under concordat sor other than by the Popes; only in the 1917 Code of canon law was this reserved to the Holy See.

This was fascinating and insightful lecture, which, as with the one last week on Anglican- Oriental Orthodox dialogue, spoke in centuries and millenia rather than merely decades. One was aware one was watching a stage in great historical process. What its outcome will be is far from clear. I think people will be watching for many many years to come...