Last year on this day I posted in St John the Evangelist  about images of him, and this year, thanks to a post by John Dillon on the Medieval Religion discussion group which gives fifty ancient and medieval images of the saint, I am sharing some of those from the western tradition which struck me as being particularly interesting or noteworthy. 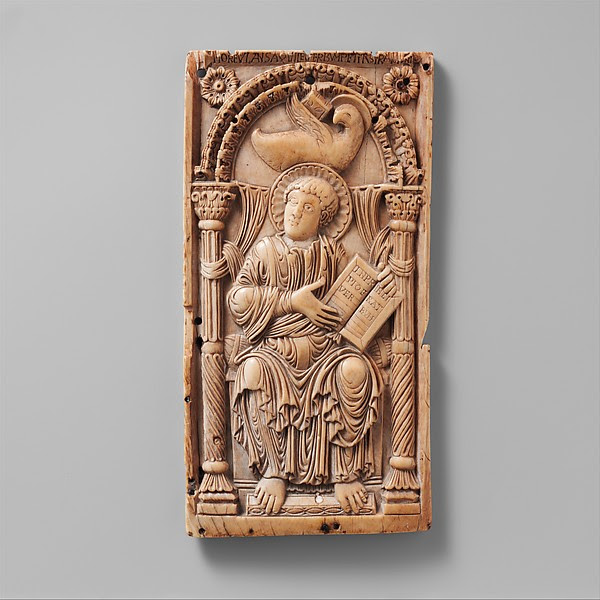 Plaque carved in elephant ivory at Aarchen in the early ninth century, now in The Cloisters Collection in New York.
Until 1977, when it appeared at a London auction, this ivory from the Carolingian Renaissance was unknown. Carved in high relief, the frontally enthroned Evangelist displays his Gospel with the opening phrase IN PRINCI / PIO ERAT / VERBVM ("In the beginning was the Word" [John 1:1]). The arch, with its rich acanthus decoration, is supported by elaborate columns and encloses John's symbol, the eagle, which is directly above him. The entire composition is framed by a simple inscribed border. The text of this inscription is based on a line from the "Carmen Paschale," a poem by the fifth-century Christian writer Sedulius. Among the remarkable features of this ivory are John's loose, classical pallium and mantle, whose calligraphic treatment and plasticity verge on pure fantasy. This tendency toward a sumptuous ornamental effect, in which the abundant drapery patterns and textures take on a life of their own, becomes a characteristic of several ivories of the Court School of Charlemagne (r. 768–814). Artistically, these ivories are very close to the manuscripts produced in Aachen for the court of Charlemagne; this resemblance suggests that they probably were carved there. Some scholars have maintained that some of these ivories may date into the reign of his successor, Louis the Pious (814–840).
Image and notes : Metropolitan Museum New York
St John as depicted on the surviving leaf of the mid-twelfth-century (ca. 1147) Wedricus Gospels
Societé Archéologique et Historique, Avesnes-sur-Helpe (Nord) France
Image: John Dillon
At Chartres cathedral in the souith aisle of the nave there is an early thirteenth century window illustrating stories about him from the Golden Legend.  The Sacred Destinations page about it, with expandable images, can be viewed here. St John is also featured in the sculptured figures of the Apostles at Chartres: 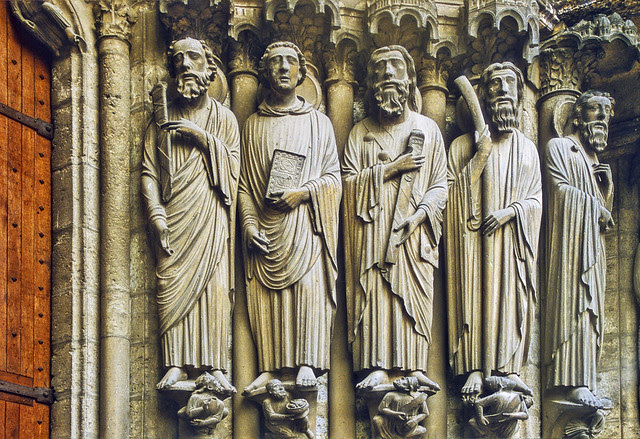 From left to right: SS Paul, John, James the Great, James the Less and Bartholomew
Image: Gordon Plumb on Flickr
Slightly later in date, and showing significant stylistic development are the statues of Apostles and Prophets at Amiens cathedral on the Last Judgment portal of 1220 - 1236.  These include this figure of St John, carrying his emblem of a chalice with a serpent:

There are pictures of all these portal statues here and here. 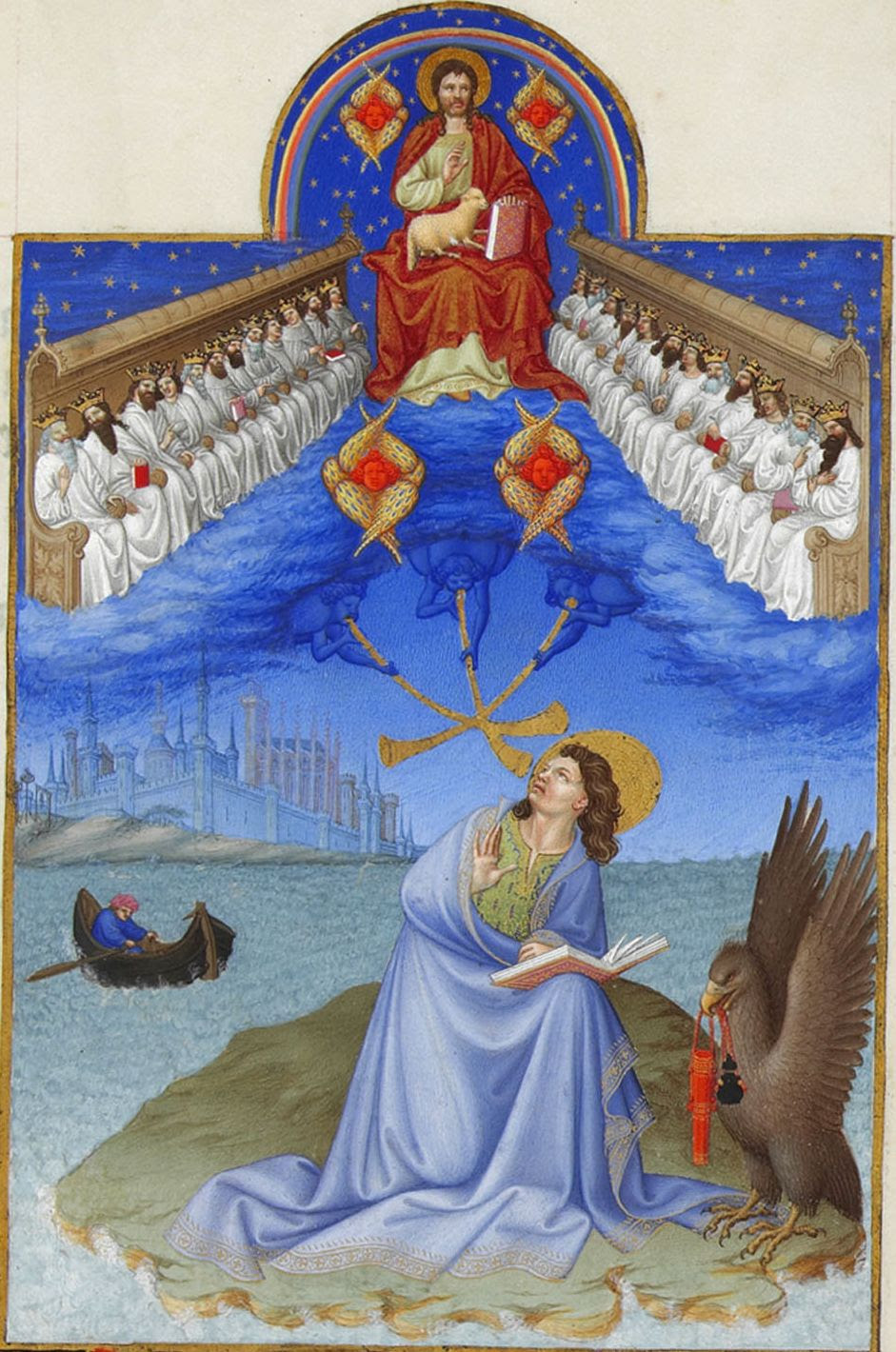 I like the way the Evangelist's eagle obediently holds his pen case and ink well.
Image: Wikipedia
By this early fifteenth century date one of the conventions was well established whereby St John was depicted with long, often ringletted, hair, as by Jan van Eyck in this grisaille figure on the outer side of the St Bavon Altarpiece of 1432 in Ghent:

Image: World Gallery of Art
This type of depiction was very common during the Renaissance, both in Italy and in northern Europe. Here is one example from Bavaria: 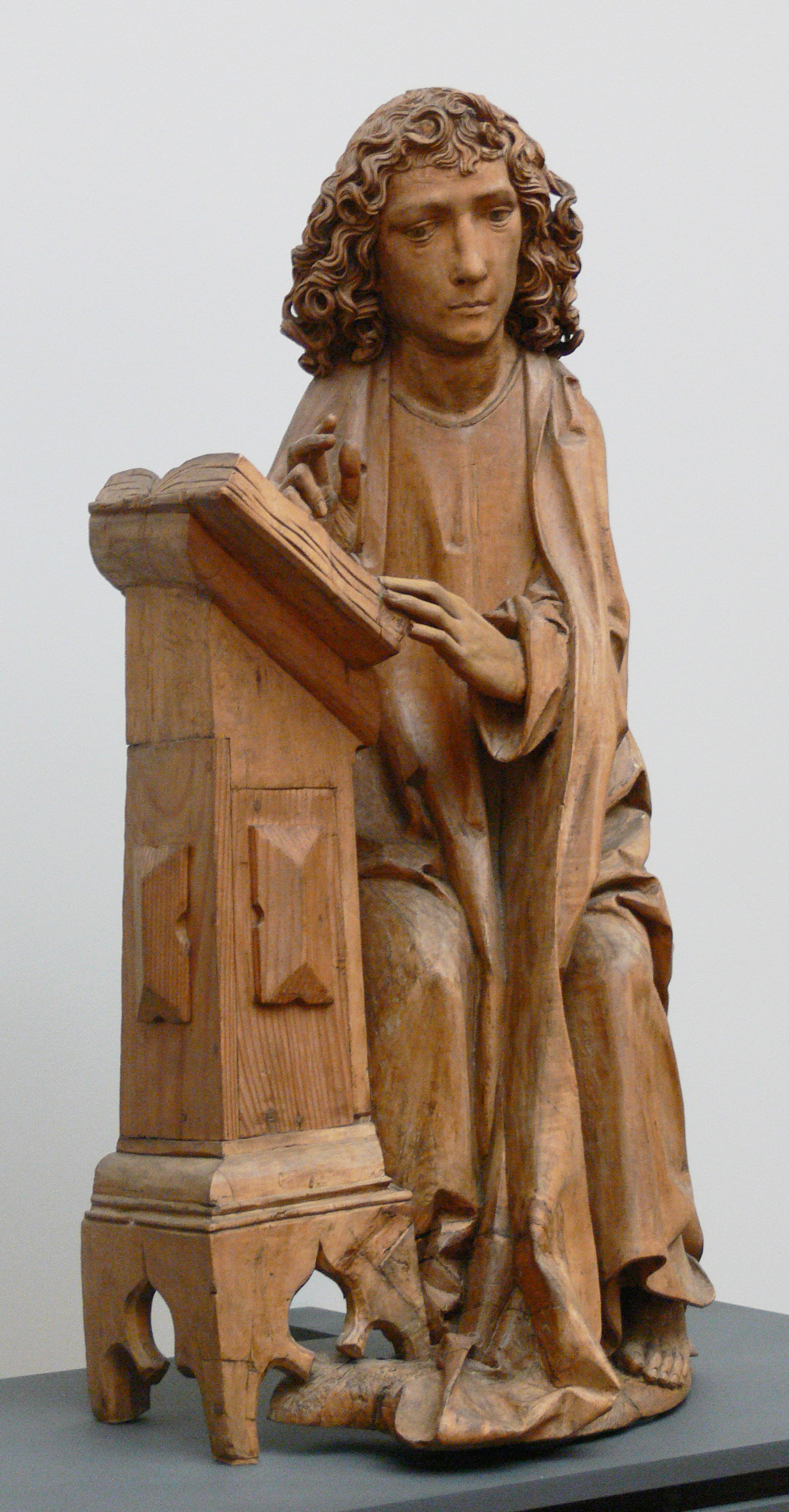 Limewood statue of 1490-1492 by Tilman Riemenschneider
From the predella of the high altar of the St. Magdalenenkirche in Münnerstadt (Lkr. Unterfranken) in Bavaria, now in the Bode-Museum in Berlin
Image: Wikipedia


There is more about the wonderful work of the sculptor here.
In Italy there was also a continuing tradition of depicting him as an older man, and indeed as a very old man, as in this marble sculpture by Donatello from 1410-11: 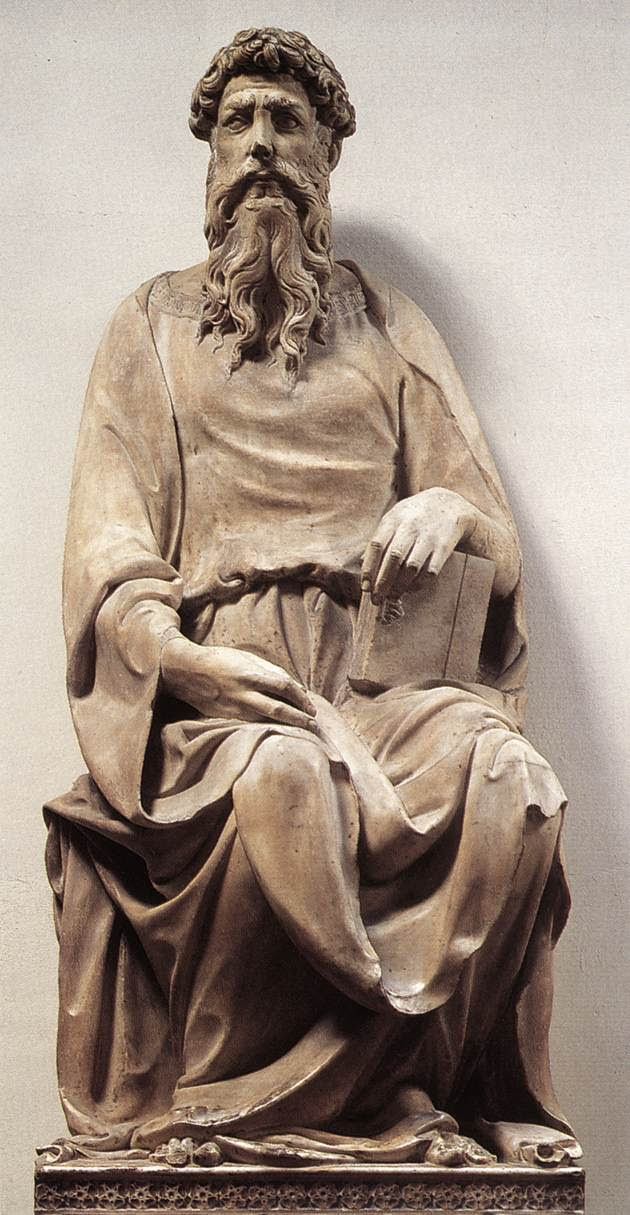 Statue in Museo dell'Opera del duomo, Florence
Image: World Gallery of Art
These are, of course, only a sample of depictions of a figure who has attracted a lot of attention and inspired varied images from artists in many mediums over the centuries