Today is, inter alia, the feast day of St Egwin of Evesham, who died circa 717. Also known as Ecgwine and also Egwine (In Latin, Ecgwinus and Egwinus) he was recorded as Bishop of Worcester from the years 692 to 717 in rewritten charters whose degree of fidelity to their lost originals is hard to gauge. There is also a largely fictional, early eleventh-century Vita by Byrhtferth, a monk of Ramsey (BHL 2432; the ancestor of a varied hagiographic progeny over the next several centuries), and also in the twelfth-century chronicle of John of Worcester.

St Egwin is considered the founder of the abbey at Evesham in Worcestershire, where his miracle-working remains were housed in a shrine completed in the later twelfth century by Adam of Evesham (Adam de Senlis). Liturgical calendars from the eleventh century onward give today as that of his laying to rest.

St Egwin is always associated with the story of the vision revealed to him and previously to the swineherd Eoves of Our Lady of Evesham  - centuries before that at Walsingham to Richeldis and to so many subsequent visons.

Michael Lapidge's biography of the saint, of whom very little is known with any certainty, in the Oxford DNB can be read here. 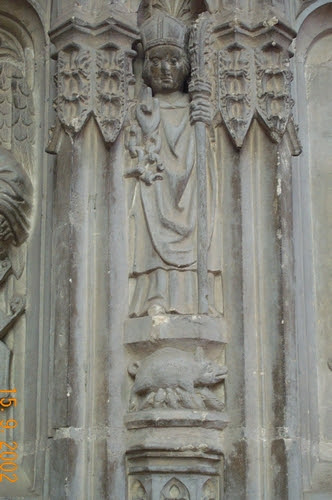 This statue of a bishop on the early sixteenth-century (1502-1504) chantry of Prince Arthur in Worcester cathedral is thought to represent Ecgwine (standing above the swine of Evesham's legendary etymon, the swineherd Eof or Eoves).


The Victoria County History account of the abbey of St Mary the Virgin and St Egwin at Evesham can be read here.

Amongst the manuscripts which survive from the abbey there is the mid-thirteenth-century Evesham Psalter of circa 1246 (London, British Library, MS Addit. 44874, fol. 6r). Here is a view of the Crucifixion illumination in the volume:

There is, alas, not much left of the abbey buildings other than its early sixteenth-century detached belltower, the doorway of the chapter house, and from the enclosure, part of a Norman gateway and the originally early fifteenth-century abbey almonry which is now the very interesting museum for the abbey site and the town.


The mostly nineteenth-century church of St Egwin at Norton near Evesham preserves a lectern said to have been unearthed in 1813 in the churchyard of Evesham Abbey: 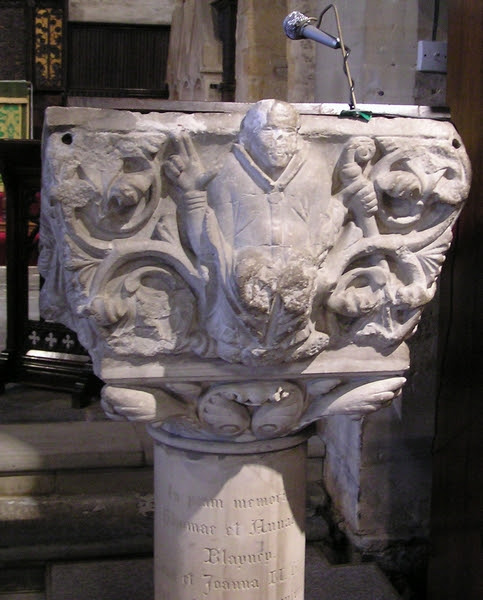 There is a detailed account of the lectern, with more illustrations of the sculpture, which can be read here.

Adapted and extended from a post by John Dillon on the Medieval Religion discussion group.